Just when you thought we were in the mid-season doldrums, and everybody is just a Parity League mid-level bumbler, an inspired determination emerges from the depths of the NFL, and franchises across the land, when finding themselves between a rock and a hard place in the sun, take the bull by the horns of a dilemma and make a silk purse out of a pig in a poke’s silver lining by being just ingeniously flat-out worse than anybody else on the gridiron, and by day’s end land with a spectacular thud in The Basement!  What a weekend! 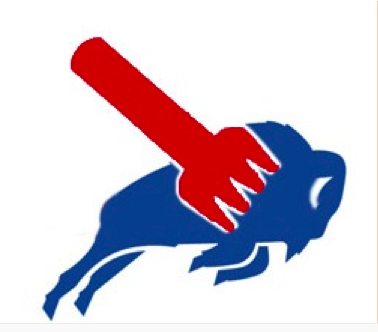 BLOWUP OF THE WEEK

Faced with the prospect of being in the playoff hunt for several more games, possibly ending their 17-year playoff drought, the Bills pull out secret weapon Nathan Peterman, and obliterate any doubt about what the Bills are trying to accomplish here. Peterman, the 5th round QB pick out of Pitt, stepped into the fray and diced up the Charger defense with 5 interceptions in the first half! The first five possessions were INT (pick-six), TD, INT, INT, INT. That’s the stuff of legend. Every pick, except the first one, was pulled off deep in their own territory, and by the end of the first half the Chargers, the team that blows leads better than any other teams in the NFL, led 37-7, and was just going to have to take a victory like a man. The Chargers find themselves, at 4-6, in 2nd place in the AFC West, and, I’m not kidding, in the playoff hunt.

Peterman, probably in therapy this morning, needed only three more to break the NFL record, but, alas, was yanked in the second half for some guy named Tyrod Taylor. It is true the Bills had lost two in a row, and looked shaky doing it, but…starting a completely inexperienced rookie in a game you could win with your regular guy out there?

Mission accomplished. But the AFC is a dogpile of mediocrity, and, at 5-5, the Bills need to keep getting pulverized for at least 3 more weeks to move out of the danger zone. Up next:  CHIEFS…no gimme

0-10 and looking like 0-16, the Blank Helmets had to get back in the turnover derby late in the second half to pull out this loss, but once they bared down with 3 consecutive turnovers- the final one coughing up the ball in their own end zone to MAKE SURE the stubborn Jags would just score a stupid TD and get off the field- the game was in the bag. 17 punts and 5 turnovers in this Doormat gem.

Up NEXT:  THE BATTLE FOR ORANGE OHIO PRIDE- The BUNGLES in Cincinnati!!

Drunk with power from polishing off the 49ers last week (and handing them their first victory), the Giants completely under-prepare for the reeling Chiefs and end up blowing their tie for the Doormat NFC lead, and end up with a victory. Typical. They tried hard to lose the game in regulation, but Chiefs minimal yardage ace QB Alex Smith was having none of that, stalling a drive at the NY 5, and keeping it to a tie, forcing overtime. If the Chiefs can keep this up, the entire AFC West could have a losing record in a couple weeks!

We were calling this Swamp Thing all last week, and wowee what a game. Dolphins QB Jay Cutler whips up three ints in the first half, leaves with a concussion, and was probably surprised to find out later that he is, in fact, still playing football for the Fins. “Didn’t I retire?”

Seventeen penalties by the Dolphins, 9 for the Bucs, four fumbles for the Fins (two lost), which barely got the Bucs to score…the Fins racked up 448 yards of offense, with the Bucs allowing huge yardage plays from every angle of the field, but, yet, not enough poor defense could get these Dolphins to give it up and win. After the Bucs kicked the go-ahead FG with 00:04 left on the clock, the Floppers pulled off a magnificent multi-lateral play on the ensuing kickoff, which just kept going backwards until they fumbled it right into the end zone, and the Bucs fell on it for the final score. Do that at home, and you are really bringing it.

The question on everyone’s mind this week was, which orange team is worse, the Bungles or the Bunks? HEY, it’s the BRONCOS!  Lowering to the occasion, the Broncos lose it at home, and now ascend into a tie for second with the Colts in the Doormat AFC race.

Bungles can now be overconfident before their crucial game with the Browns next week.

4-6 and fading fast, we have some trends: Raiders receivers not named Crabtree drop more deliveries than a UPS mail sorter. The Raiders have zero interceptions this season. They have no pass rush. They… well what did they do? They played in Mexico City yesterday, so at least their fans had to travel a really long way to drink cheap beer and witness this trip down memory lane to the bad old days…which were only a couple years ago. The Al Davis flame still burns, and the team is burying themselves. Funny thing about winning- it’s a lot more fleeting than losing.

Keep playing like this, and the Bears (3-7) might win a couple games and fall out of contention for the Moldy Carpet trophy.  But, they still found a way to lose at home to the Kittens, and the Giants won, so anything is possible. It’s just one game.

Not everybody can make the Ravens look good, but the Porkers pulled out all the stops, including the most hideous throw-back uniforms ever allowed on a football field. Beige pants with blue and yellow tops? The Pack played down to their attire, and flailing rookie QB Matt Hundley hurled 3 interceptions and dropped a fumble, and the Packers offense just got off the field as much as possible, and, eventually, the Ravens found a nearby end zone.

The Packers play the BROWNS in 3 weeks. Whoa. If Aaron Rodgers isn’t back for that one, the Browns are in trouble, as in perfect season is in trouble trouble.

Just when you think some one will pull off an upset, just one, somewhere, the Deadskins can’t do it, and, in phenomenal swirl of inactivity and blowing up, rally the Saints to victory, a 17-point swing in no time, and snatch the ring of defeat off the merry-go-round. Holy Cow.  ANOTHER 4-6 team joins the party.

It’s getting really 4-6 crowded in the Basement and out on the Patio, and the next two weeks will separate the men from the Moldy Carpet contenders FOR SURE.  We gotta hope.  I’m running out of stale pretzels.

AAAAAAnd That’s the View from the BASEMENT!!!!!!!