Director John Waters once said:  “When I say action, you pick up that poodle poop and eat it.” Wait, that’s not the right quote…here:  “I used to play “school” as a kid with the little girl who lived next door, and I was always the teacher and she was always the student.  Every time we played I failed her, yet she still eagerly agreed to play every time I asked, fully knowing the results. Failing can be a relief for some. A sexual position. A way of life. A choice. Some kind of happiness the never lets you down.” 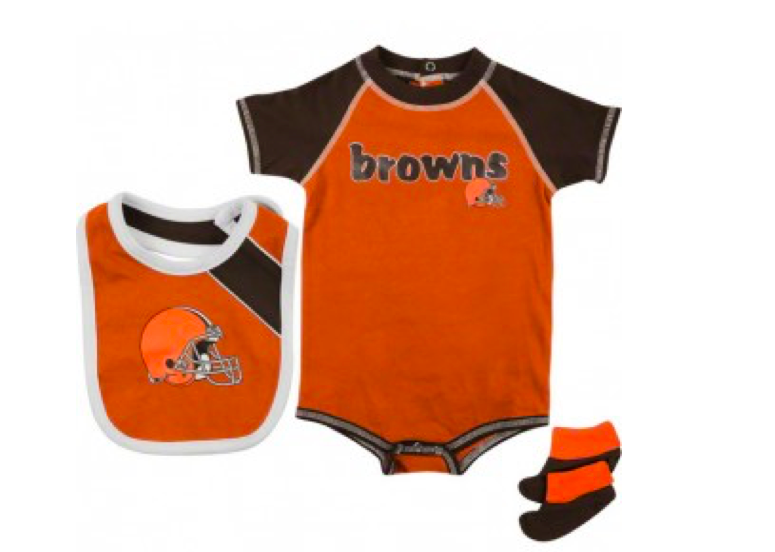 Is this it, Doormat fans? Cleveland? Colts? Cincinnati? We gotta find some kinda something here in the Basement. We gotta be able to count on our guys. Fill the Blank Helmet chips bowl, and fish out the stale salsa from the back of the fridge. It’s our turn.

GAME OF THE YEAR

Faced with the most difficult challenge of the season, the Cleveland Browns brought home the Excedrin yesterday in Green Bay, rallying from up 14 points in the 4th quarter (in what looked like a sure victory) to force a tie and then crisply blowing it in OT (a DeShone Kizer Hail Whoever interception on the 3rd play deeeep in their own territory), nailing down loss #13 and preserving the Perfect Season Parade, which cleared their $10,000 budget mark by getting a $7,000 bump from the nice people at Excedrin, who announced that they “feel your pain.”

They’d better be feeling it today, because that was the art of losing played like a Stradivarius in the hands of a frozen-fingered out of tune accordion busker on the corner of Lou Groza Blvd and Pearl St. outside Browns headquarters in Cleveland. May the swirling hot dog wrappers of disappointment settle upon your prostate frame, providing thin cover from the cold, as you stare up into the gray sky, wondering what you ever did to deserve this…being a Browns fan.

It was a bizarre game, all right. Brownout fans were subjected to THREE long touchdown drives, the first time all season they’ve had to survive this sort of production, with the suspense of the anticipated turnover after about five plays causing brain aneurysms all over the Cleveland area. But no– the Browns just kept scoring. But from great heights comes vertigo and the defense stepped in where the offense couldn’t, and just ran out of gas, and 20 points never looked so easy to give up. It was killer.

Hats off to the entire Browns organization on this one, and all that’s left is the Bears on Christmas Eve, the last serious challenge to the Perfect Season. The Parade? Jan. 6th, Browns sufferers, is the date to pull yourselves up off the concrete, put on every inch of brown and orange you have, and join the procession that will be the Perfect Season Parade. It’s your only hope.

The Perfect Season Parade is real, BTW — here’s where you too can donate.

All proceeds, should the Browns win a game, will go to the Cleveland Food Bank, which is what they did last year after the Browns beat the Chargers for their only win. Kind of makes one want to root for the Brownies to win just one, no? Make a donation.

BATTLE FOR THE ORANGE

In our Orange You Bad division big game yesterday, it was no contest, as the Bungles out-oranged the Bears beyond all dimension, and blew, and I say blew the Bears off the field and into the win column. After last Monday’s brawl vs. the Steelers, the Bengals had to field the video simulation squad, dressed to look like a defense. The Bears had no chance against this, and piled up the most points they’ve had all year. Andy Dalton and the Bungle offense chipped in an early touchdown and retired to the sidelines for the remainder.

The Bengals have three games to go, and if they pull the plug on the roster and ice everybody down now, which looks like a good bet, they’ll make the 10-loss club and be back in the Basement for a long, long loooooong winter.

When the first possession of the game ends on downs, and punting seems like a dubious thing to try, you know you are in for a helluva game. Now, if only the Buffalo Bills can dial up a foot and a half of snow for every remaining game, they’ll make the playoffs.  As long as nobody can see which way the goalposts are, and your cleats turn into snowballs if you run more than five feet, the Bills have a shot.

Locked in a invisible snowball fight with the Colts for Doormat icebox supremacy, the Nils unveiled their deep-freeze secret weapon: No, not the snow plow – Third-String QB Joe Webb!  Joe, where ya been? After QB Nathan Peterman — clearly cooled off from his blazing five-interception debut a few weeks ago — disappeared in a snow drift on the sideline, the elusive Webb entered the fray and completed two passes. But he only needed one. Rolling right, Webb uncorked a 34-yard flotation device in overtime to what may have been Deonte Thompson’s arms sticking up out of the snow, setting up the game winning 21-yard non-slip demonstration by LeSean McCoy into what appeared to be an end zone to…WIN A GAME.

The Clots, with Denver’s win yesterday, move into sole possession of second place in the AFC Doormat.

Wait a minute. The Texans — they should decide on a pass defense that follows receivers and stuff. And maybe don’t have defensive ends running 20 yards downfield in pass coverage. Probably a bad idea. The 49ers sure aren’t going to lose many more contests if they have QB Jimmy Garoppolo piling up 300-yard games. This is no way to stay with the Giants, that’s for sure.

The Texans, at 4-9, have the Jags, Steelers and Colts left to get at least one more huge L and make the 10-Club. Says here they do it. The Whiners still have the Titans, Jags and Rams left on the to-do list, so they can still lose the next three, though the Titans are the shakiest 8-5 team in the league. But, let’s face it, Jimmy G guy may not be Joe Cool, but he’s a real QB. Doormats don’t have real QBs. A ray of happiness descends on the Red and Gold Faithful.

Not even a hated rival in a long, long rivalry can get the Flailing Giants into any sort of danger of winning.  But it’s not a lock, yet — the 49ers are playing playoff teams for the last three games, and the Flailers get the Eagles with no Carson Wentz, and then the Cardinals and the Skins, so…they have to be just hitting the hot tub and trying not to get injured at this point, right?  There’s nobody even at the helm.

Yeah, I know they aren’t Doormats anymore, and kind of never were, but losing Carson Wentz for the rest of the season and playoffs really hurts, man. That game yesterday was just flat out fun, and now…poof.

Riding an 8-game losing streak, the Broncos run into a buzzsaw of futility, and get spit out into the win column by the Basement-ready New York Jets. The Nyets uncorked a six-first-down masterpiece of nothing: 100 total yards and eight punts of a magic disappearing act by the offense, and the defense ran out of oxygen just running their competitive flab out onto the field from the locker room into the thin air of Denver. Wheeze.

Jets move to within a game of the Broncos, and are slouching towards the 10-club.

Sorry to see QB Josh McCown, who has had the best year of his career, get knocked out for the season with a hand injury. The Jets are close to being Parity Promising, but just zero-out every coupla games and lose like they mean it.

I know this is a Parity game, but the Silver and Blacked Out looked so bad, in a game that was huuuuuge. Whoa. Raider QB Derek Carr just keeps waiting until later and later to start playing ball. Pretty soon, he’ll finally be on his game in the after-game press conference.

In fact, I think he was yesterday. Starting games like you have no idea how to get downfield is a top-down planning thing, so hat’s off to the Raider coaching staff for this bomb.

The Titans are 8-5 and in the playoff sniff, but you’d never know it watching this one.  Doormat All-Star Blaine Gabbert is steering the Cardinal van, and he’s doing a good job of keeping it out of the end zone, but four field goals still hangs a W on your scorecard when the Titans shut it down like they did yesterday. Ka-lunk!

The Run to the Moldy Carpet is a not a done deal yet, fans.  The Browns gotta cash in two more losses to lock it down, as the Giants show no sign of letting up.

aaaAAAAND That’s the View From the BASEMENT!!!!!!!!