More
UncategorizedGoogle buses have a new parking lot -- the...

By Tim Redmond
August 7, 2014
Share on FacebookShare on TwitterShare on LinkedInShare on RedditShare on Email 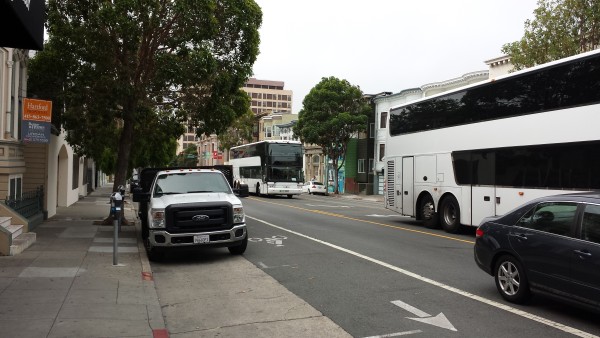 I’ve seen the big bus shuttles stop on Valencia now and then, perhaps between runs, but now one section of the street has become  something of a Google Bus Parking lot. This morning I saw two of them clogging the center lane, idling, for quite a while; when I stopped to take pictures, one of the drivers saw me and quickly pulled away.

There are lots of parking control officers in the area. Nobody was citing the Google buses.

Previous articleDoes Airbnb have an ADA problem?
Next articleThe missing story — and the missing people — at the Airbnb hearing