New novel 'The Wanderings of Chela Coatlícue: Touring Califaztlan' from the Chilean author is a feminist, 'choose your own adventure'-type quest.

The Wanderings of Chela Coatlícue: Touring Califaztlan (Transgress Press) is the first installment of a trilogy of coming-of-age adventures, following a brazen young musical prodigy in search of a sacred bass once owned by a legendary blues musician, Sugar Rivera. The fantasy novel “takes readers through numerous plot developments and twists that lead them to a variety of choices and outcomes, as Chela travels from the punk rock slums of Mexico City to the suburbs of Los Angeles.” It’s a reader-driven, “choose your own adventure”-type story, a border-crossing, feminist quest with plenty of twists and turns..

Ananda Esteva spoke to 48 Hills before an upcoming series of readings: 3/15 at the Octopus Literary Lounge, 3/28 at the Green Arcade bookstore and 4/4 at City College of San Francisco.

48 HILLS Your family came here escaping Pinochet’s Chile. How did this background influence the creation of your protagonist, Chela?

ANANDA ESTEVA Lorna Dee Cervantes says in her poem “The Refugee Ship,” “…I feel I am a captive aboard the refugee ship. The ship that will never dock. El barco que nunca atraca.” That’s how I feel, like I’m always on a road trip in my mind. I can’t seem to settle and fully embrace a place or a person. I also don’t fully fit in to either culture. As a woman, I’m too straight-forward and crass for Chile but too accommodating in the US, I’ve been told. My main character, Chela hangs out with guys and carries a sassy, bordering on snarky, way about her. It comes out indirectly; her mom is not especially pleased about how she expresses her womanhood.

48H The character of Sugar Rivera was based on a real-life musician. Who was it, and how did he become Rivera in your book?

AE Sugar Rivera is loosely based on Charles Mingus, that’s why I have Mingus quotes in there. Originally I used his name instead of Sugar Rivera and the book was a fuller Mingus experience. Way back when, I had a crush on a stand-up bass player and she introduced me to Beneath The Underdog by Charles Mingus and that book stuck with me. I’ve always been deeply touched, from my bones on out, by certain types of Jazz. When I was still in high school, I used to go to The Church of Saint John Coltrane in San Francisco, where folks would play jazz in a rapture.

Mingus became Rivera just out of fear of being sued. This is a fantasy novel, yet the characters are hyper-real. There is no basis for Mingus having an affair with a curandera in Veracruz. That was just a silly idea, but one that launched me on the journey of writing this book. I was determined to keep the Mingus name in there. We tried to get permission to keep his name. We contacted the people in charge of the Mingus legacy. In the end, I never got the final word from the Mingus people, so we went with Sugar. The reason Sugar has a Spanish surname is because, in the bebop era, there were Jazz vocalists who pretended to be Latino in order to be able to play their music due to segregation. I guess when mambo was on the rise, some Latin artists, could sneak into the white side of segregation. 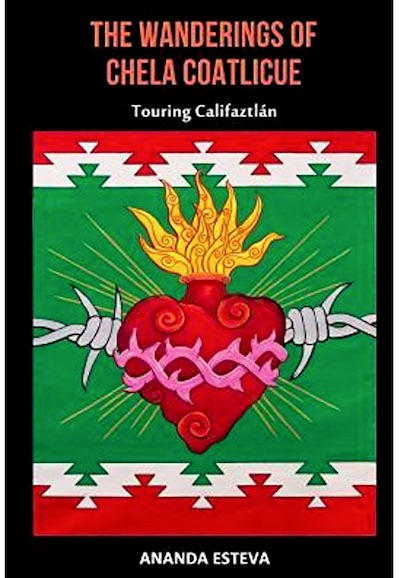 48H Your book is many things but especially a story about crossing borders. Why are these kinds of stories important now?

AE One of the reasons I made this book nonlinear, where the reader can turn to different pages based on their whims and then have a variety of experiences, I wanted to make it so that the reader could cross the border multiple times and in a variety of ways.

The upcoming second book in the series, goes into crossing borders more intimately because Chela walks through the border, both alone and with others. In the first book, she attempts to drive through. Most of it is pretty fantastical with crazy car chases while blasting music. “Haitian Fight Song” was one of their border chase songs. I thought it would be cool to connect Haitian independence with my characters struggling to get across the border despite all odds. Haiti was one of the first colonies to become independent and was the first to abolish slavery, all thanks to The Slave Revolt of 1791. Talk about underdogs!

Another border chase song I have in there is a song that was used to inspire American troops in Iraq. I thought it would be funny to flip that song, so instead of being used to kill Arabs, it would be used to fight the Border Patrol.

Parts of the border descriptions were based on true experiences that I have had. The most exciting was getting secretly X-rayed by the Federales and having the car stripped, lining and all. Just like in the story, they thought our CD cases were gun cases. It was nerve-wracking because I didn’t know how to drive and my partner, who was driving, didn’t have a license. But after stripping the car naked, they didn’t ask for his license—and he was a trans guy, so getting arrested in Mexico, was the last thing he needed.

I also wanted to include the ICE Detention Centers. When I was writing the book, the existence of ICE Detention Centers was not common knowledge. I knew that political prisoners were often held for long stretches of time, but it was even more unnerving to hear about everyday folks being locked up indefinitely just for stepping from one side of the line to another. Mind you, the southwest was Mexico not that long ago. I wanted to make sure to include the ICE Detention Center in the book. Apparently, these ICE prisons are all over. The locations are on their website. There’s one a couple of miles from my house and that one is being expanded.

48H Although this is your first published novel, you’ve been a Bay Area favorite in the poetry scene for quite sometime. How did your study with June Jordan and your time with the legendary Molotov Mouths Outspoken Word Troupe shape your fiction?

AE June Jordan branded in my brain, “Maximal impact, minimum words.” I really tried to accomplish that with Chela. I was thinking about that the whole time I was writing. She forced us to read our work aloud to check for flow and assonance. So I think the reader will find reading Chela to be a lyrical experience. June also believed in honoring your own voice. That took me a while to embody, because I never thought anything I experienced was worth telling.

I have all these gritty, sweaty, smelly but lovely memories of going on random road trips with the Molotov Mouths Spoken Word Troupe, so that’s definitely in there. Manic D Press published an anthology of our collective’s work, and that gave us an excuse to cross the country reading in union halls, community centers, bars, at protests, and even living rooms. Some people have said to me, why didn’t you make Chela Chilena like you? One of the reasons was the road trip, since that was something I did know. Having a road trip from Chile to Mexico would be far, far, too long of a book.

48H If your book is made into a movie, what actors would you love to see star in it?

AE I like Dascha Polanco from Orange is the New Black and America Ferrera for Chela. Part of the point of the book is that Chela has curves, just like her grandmother and just like the bass, called The Perfumed Lady. Dascha is not meso-American but I like her for Chela is also supposed to represent La Raza Cósmica, The Cosmic Race with indigenous, African, and Spanish blood. I’m not sure for the rest, but I see them in my mind: Pato would need to be tall and big-boned. Fedi, cute, wiry and twitchy. Charlie, full-lipped and long-nosed.