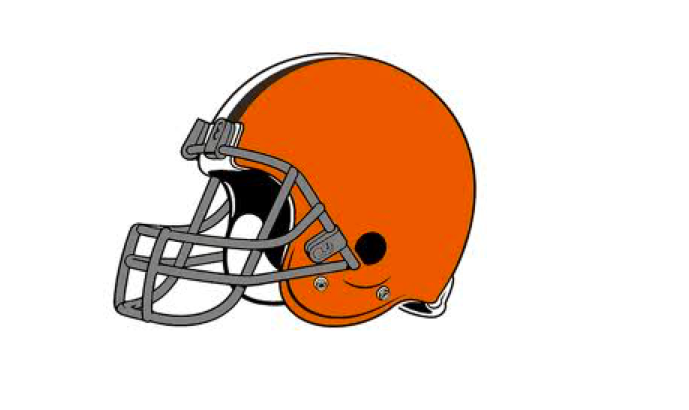 Get out your paper bags, and cut some eyeholes, Browns fans! Another professional, workmanlike effort from the 0-14 Men of Blank, clinching the AFC championship with a turnover blitz against the game, but not gamey enough, Baltimore Ravens (the ex-Browns).  Immediately getting some Ravens points up on the first defensive series (3-0), the Brownouts followed up with two punts and an interception. But the Ravens just punted right back, and then unleashed a botched defensive play that gave the Browns a 59-yard sprint down the field by Isiah Cromwell, followed by a rare end zone appearance by a Brown for a touchdown. Browns lead 7-3.  Browns fans settled in for the inevitable collapse. Patience, grasshopper.

The nerves calmed down, though, and the Browns uncorked Baltimore’s passing game, plus sprinkled in a fumble at their own 45. Next thing you know, the Poes had two touchdowns, and, despite a last-minute first half field goal by the Blanks, were safely up 17-10 at the half.

The second half began with frenzied punting by both sides, but the Browns craftily moved back, back, back, until they were pinned at their own 4 after the Raven’s second punt.  Seizing the opportunity, Browns QB DeShone Kizer drops back into the end zone and…waits..don’t look around…and pow! — coughs up a perfect Fumble Six, kicking the Ravens a little further down the street, with no view of a loss anywhere in sight. 24-10. Game over.

Next week is the big one- the 4-10 Chicago Bears will be playing host to the Brownouts on the 24th, the biggest obstacle to a perfect season for Cleveland. It is eerily similar to last year, when the Chargers waltzed into Cleveland with a 5-9 record, on Xmas eve, and shoved a win down the Browns throats, wrecking the Perfect Season Parade plans. But, as hard as Bears coach John Fox may work at desultory losses, I think the Browns have it wired. But, that’s why they play the game…. for the tailgate. What?

Getting an early start to the losing weekend, the Bears buried the Lions with an avalanche of penalties (13) at the Kat Box on Saturday. Following up their Orange Bad victory last week over the nearly-Bengals with a three-interception scorcher from QB Mitchell Trubinsky, the Bears move into second place in the Doormat NFC, holding the tie-breaker over the 49ers. Next week Trubinsky and Kizer will play the rookie turnover-challenge-game-within-the-game that decides the game.

Our only Doormat head-to-head game this week, and it was a nail-biter until after the halftime burritos and beer huddle in the Colts locker room. To be fair, the Clots staged an arduous 12-play grind to start the 2nd half, ran out of gas, belched, kicked a field goal, and called it a day on offense.  The defense responded with 15 Broncos points, and both teams got to take the 4th quarter off. As it should be.

They almost did it again. Playing their best football of the season, the Gnats come perilously close to scoring another 3up3down upset, almost tying the game in the 3rd quarter at 31 on a two-point conversion attempt. But, they came up short, and then did what all our loss leaders do — run out of fuel in the 4th quarter, and watch it all melt away like so many fans into the chilled, gray, New Jersey afternoon, shuffling back to the last burnt weenie on the dark BBQ back in the lot.

Pitching in mightily for the Jaguars playoff clinching party, the Houston Toxins needed only four extra plays over the minimum for the 1st half (all 3-and-outs would be a ‘perfect game’) on offense, and just continued the Chaos Rules routine in the defensive backfield, and kablooey the Jaguars were up 31-0 at halftime. Oh, that “changing of the guard” feels good, don’t it, Jags fans? Toxins make the 10-loss club with two weeks to spare.

It’s all gone completely off the rails for the Whiners. Once 0-9, and then only taking a win against the tough-to-lose-to Giants, the Whiners have won three straight!! WHAT?? Ever since the new Italian model took over behind center, it’s just not at all the same. Doormats don’t win three straight. They’ve gone Garoppoloco. But, look at the bright side: they still only got one touchdown, during ‘Celek Time’, and still some brilliantly boneheaded penalties got sprinkled in there.

But, SIX field goals is going way beyond Doormat logic.  Guys, yes, you’re supposed to fail in the red zone, and kick field goals, but not SIX. You’ll win the damn game. Well, there’s nothing for it but to celebrate the rare 3up3down victory for a Doormat…who isn’t looking at all like a doormat. Enjoy the fresh air, you bums!

Oh, lord, we’re gonna have to let them in, aren’t we?  Next week it’s the Eagles and then the ‘who’s got the tee-times set up?’ game against the Chargers. They could lose 10. The Silver and Blacked Out are hovering out on patio. Geez, and we put all the Raider stuff out on the curb in the Free Box last January. Bother.

The tension. Out of the playoffs for 17 seasons, the Bills ‘control the own destiny’, which is probably something Bills fans don’t want to hear. Now that the Fin Flop is over, the Bills travel to Foxboro for tea with the Pats, that super-annoying nine straight division title winning culture that you just wanna punch in the…is there any more potato salad?

That’s 10 straight field goals by the Cards, so you know Blaine Gabbert is on his game.

Hold onto your blank hats, fans, the Perfect Season Parade is coming to a Cleveland near you!!