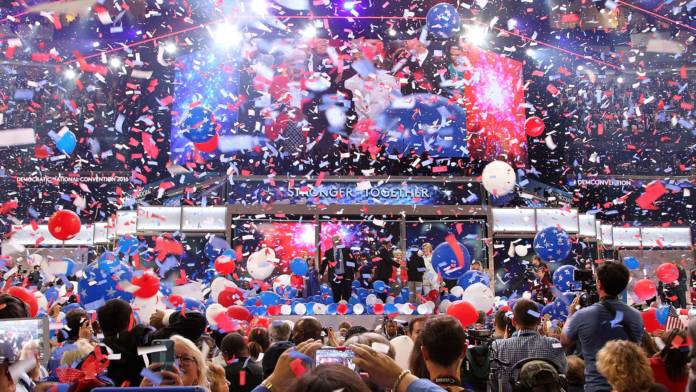 Let’s make a huge leap here – even before the California primary, and I will explain why in a moment – and look at what might happen in Milwaukee, Wisconsin in July.

It’s possible that one candidate (and right now, that looks like Bernie Sanders) will win enough delegates to be the nominee on the first ballot.

But it’s entirely possible, given the primary schedule, the way delegates are awarded, and the number of viable candidates who have the money and organization to stay in the race for the next few months, that nobody will arrive at the convention with a 50-plus-one majority.

And at that point, if (for example) Sanders is pretty close, but not quite there, and Elizabeth Warren has enough delegates that between the two, they could chose the candidate – then the Sanders and Warren delegates will have to make some difficult political choices that will be critical to the future of the country and the planet.

There will be deal-making. It might not be pretty.

If the outcome is that the party splits badly, the convention is a train wreck, and the final candidate is someone who can’t inspire the voters, then Trump could be re-elected.

I’m saying this because, for the first time since the 1950s, it might really matter who the delegates are. In a brokered convention, you need people who have both political integrity and political sense.

We will vote March 3 for a candidate – but what we are really voting for is convention delegates pledged to that candidate. If nobody gets a majority on the first ballot, we are electing delegates who will be the main players in a massive political crisis.

Most people have no idea who those delegates are or how they get chosen.

Here’s the simple answer: Any registered Democrat who wants to be a convention delegate needs to fill out an application before March 3 (the same date as the primary). Then in April, the local party (this is done by Congressional district) will hold a caucus and select the winners who get to go to the convention.

In the past, it didn’t matter much, since the Democrats were just choosing people who would have the chance to go to a big party and vote as they were told.

If you want to be considered as a delegate – for any candidate – you can fill out the form here. And if you care who the delegates are, you can go to the caucus April 19, with your supporters (who have to be registered Democrats) and try to get elected.

The state will send 271 district delegates to the convention. If one candidate already has the votes, then it’s just for fun. If not, it’s for all the marbles. And the deadline to file is the same day as the primary.