SCREEN GRABS Thanksgiving is a big week for movies — much of America rolls downhill toward the multiplex after gorging themselves on the big day, or during the subsequent long weekend. Yet oddly there’s not a lot going on this week in terms of new arrivals. For families, there is some big noise in the form of Pixar’s Coco, an animated dive into Mexican culture (particularly Dia de los Muertes) whose below-the-line talent includes Octavio Solis, the Texas-born playwright who spent a couple recent decades in the Bay Area theater scene. You can also take the kids to a sing-a-long Beauty & the Beast, which plays the Castro on an irregular schedule Nov. 22 through Dec. 3.

If you want to leap right past Turkey Day to the next holiday, there’s The Man Who Invented Christmas, a purportedly stale load of Xmas cheer with Dan Stevens as Young Dickens writing that story about Scrooge (Christopher Plummer). Nor have advance reviews stirred great expectations for Roman J. Israel, Esq., which offers Denzel Washington a flashy Oscar-bait role but has been received as a letdown after writer-director Dan Gilroy’s striking 2014 Nightcrawler.

Fortunately, there are still good movies lingering around, as well as one new arthouse arrival (see The Divine Order below) and a few one-shot events worth your notice this coming week:

FRANTZ FANON: BLACK SKIN, WHITE MASK WITH ISAAC JULIAN AND JUDITH BAKER
Julien was a major figure in the New Queer Cinema movement with his features Looking for Langston (1989) and Young Soul Rebels (1991). Since then he’s focused more on gallery and academic work, but remains a significant cultural presence in his native UK. He’ll visit the Pacific Film Archive to screen and discuss (with UC Berkeley professor Butler) his 1995 documentary about Fanon, the Afro-Carribbean intellectual, political activist, psychiatrist and author. Dead at just age 36 in 1961, he is still relevant (and controversial) for his insights on race, colonization and other issues he no doubt hoped we wouldn’t still be dealing with today. Admission to this event is free. Mon/27, BAM/PFA. More info here.

THE DIVINE ORDER
Almost incredibly, Switzerland didn’t grant all women the right to vote until 1971—one small region even kept them out of local elections for another two decades. Petra Volpe’s feature, that nation’s Oscar submission for this year, dramatizes that national struggle in microcosmic terms. A small-town housewife named Nora (Marie Leuenberger) — like Ibsen’s rebellious heroine in A Doll’s House — finds herself in the hot seat as the reluctant local standard-bearer for women’s liberation.

She’s happy with husband Hans (Maximilian Simonischek) and two sons, but still yearns for some life outside their needs. When she proposes getting a part-time job, however, Hans not only opposes it, he notes that by law she can’t accept the post without his permission. This conflict escalates into a village-wide women’s “strike,” as meanwhile bra-burning feminists take to the streets in Zurich. The Divine Order (its name taken from claims that “equality of the sexes is a sin against nature”) is a somewhat formulaic crowdpleaser whose plot beats seldom surprise. But it is pleasing, with solid performances, direction, and a message that unfortunately needs to be heard just as much today as it did nearly half a century ago. Now playing in SF, Berkeley, and San Rafael.

PAN’S LABYRINTH AND THE DEVIL’S BACKBONE
A rare director able to straddle both pop mall-flick fantasies and serious adult-themed ones, Guillermo del Toro is said to have hit another career highpoint with The Shape of Water, which won the Golden Lion at Venice. It doesn’t open in SF for a couple weeks, but in the meantime you can refresh your knowledge of the Mexican auteur’s oeuvre with this double bill presented by Midnites for Maniacs. Both Spanish-language features will be shown in 35mm, and both are fantastical approaches to political indictment set in the early days of the oppressive Franco regime.

In 2001’s Backbone, a rural orphanage becomes a supernaturally-tinged battleground between Republican loyalists and fascists at the end of the Spanish Civil War. The 2006 Labyrinth finds a little girl escaping into a sometimes-perilous mythical world while her mother succumbs to illness, and her new stepfather does Franco’s dirty work as a ruthless military commander. Wed/29, Roxie Theater. More info here.

SCRITTI POLITTI
Other Cinema provides a sure-to-be-lively evening of “communal Trump piñata pounding” with a program highlighting global issues at a particularly dire moment for U.S. international relations. Directly laying siege to the orange-utan himself is Maxim Pozdorovkin’s (Pussy Riot: A Punk Prayer) archival-clip “biography” Our New President. Citizenfour director Laura Poitras’ Project Xexposes a secret NSA surveillance base smack in the middle of Manhattan, Elizabeth Lo’s Hotel 22 reveals the impoverished fiipside of Silicon Valley wealth, while works by Bochay Drum, Sky Hopinka and others spotlight inequities wrought by corrupt power throughout the Americas. Caitlin Manning will be present to introduce her Dispatches from Mexico, about the revolutionary leftist Zapatista Army of Liberation in Chiapas. Sat/25, Artists Television Access Gallery. More info here. 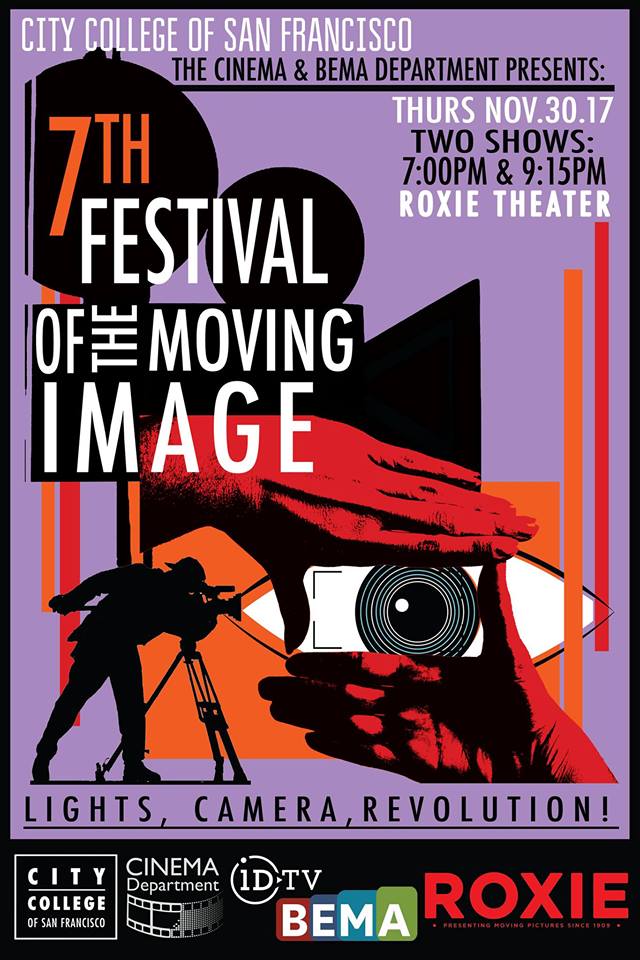 7TH ANNUAL FESTIVAL OF THE MOVING IMAGE
Wondering what them younguns with their video-cameras and whatnot are getting up to these days? Check out this showcase for work from City College of SF’s Cinema and Broadcast Electronic Media Arts department, whose two separate programs tonight feature a wide range of documentary, narrative and experimental shorts crafted by both students and faculty. Thurs/30, Roxie Theater. More info here.

BREWMASTER
What’s better than being able to drink beer at the movies? Drinking beer while watching a movie about beer-making, of course. This new documentary from Douglas Tirola (who made Drunk Stoned Brilliant Dead: The Story of the National Lampoon) focuses on the world of craft beer brewing, and one New York lawyer tempted to abandon his suit-and-tie day job for that rapidly growing industry. En route, he meets a number of its leading personalities. Some of their local representatives will be on hand for a Q and A and after-party during this one-night, over-21-only event at the duly alcohol-licensed Alamo Drafthouse. Wed/29, New Mission Alamo. More info here.