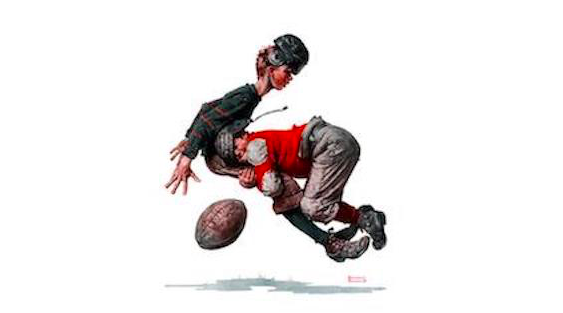 Three and 10? 3-10!??  With just three weeks to go in the run to the Moldy Carpet trophy, the worst our gridiron losers can offer is a possible 3-13 record. The Raiders and the 49ers both won yesterday, right after the local rag, the SF Chronicle, chronicled how their combined 4-20 record had a shot at being the worst of all time in the Bay Area.  It still does at 6-20, but they have to lose all their remaining games. Should they both win again, horrors, the worst the Doormat Division can get is 4-12, which hasn’t happened since 2003, when the Giants, the Cardinals and the Chargers all went 4-12.  Clearly, teams just aren’t bad enough this season. Where’s the tragedy, the pathos, the misery?

The Failcons just keep on losing, five straight now, climbing into a solid third place in the Doormat NFC with a complete game of non-competitiveness. Losing to the Packers takes some effort these days. You can’t just waltz out there and get creamed. Falcons five-game skid started with a loss to the Browns (28-16), the kind of loss that starts losing streaks- losing to what you think is the worst team in football. But guess what?  It’s YOU.

Packers win first game under new coach. Packers will now fire the head coach every week until they lose a game. Then, they’ll fire the GM.

Doormat Perfection: The Bags scored their first points on a safety (muffed punt by the Titans), took the ensuing punt-off and drove to the Titans 4-yard line, where they killed the motor, and left the pigskin on the 1 for the Titans.  On the next play, Titans RB Derrick Henry galloped 99 yards for a touchdown.

Break up the Giants!  Winners of two straight, the Giants, at 5-8 have a mathematical shot at the playoffs, however difficult that math may be.  The Skinnies, without Alex Smith, have Doormat Finish gleaming on their team bus.  Basement All-Star March Sanchez started at QB for Washbag, and guided the team to:  punt, punt, punt, pick-six, punt, punt, interception (resulted in TD in 3 plays), punt, punt, punt, somebody stop this.

QB Josh Johnson- remember him from Tampa Bay?- came in and ruined the shutout, bagging two TDs in the 4th quarter.  Redskinks (6-7), losers of four straight and a clear shot at 10 losses, have to contend with the plummeting Baguars next week.  Be there.

The Bills and Jets split their season series, keeping a cordial relationship going out on the Basement patio, burning a weenie, dumpster diving in the alley, and sharing the last stale can of Busch Light. Not that the Jets didn’t try to lose this one. After their halftime brainstorm (ow!) the Jets deftly fumbled the kickoff, planting the Bills firmly at the Jets 13-yard line. The Bills saw through that, and killed the ‘momentum’ and escaped with a FG, keeping the Jets within a TD (20-13). The Nyets countered with an interception, but the Bills refused to take the bait, and punted. The Jetskis couldn’t stop the downhill effect, and scored a TD, but promptly got the Bills downfield, only to be thwarted when the Bills shanked a field goal attempt. 20-20.  One more Jets three-and-out produced a grinder drive for the Bills and they got a 3-point boot hung on their necks. 23-20, Bills.  With the game clock dwindling down,the Jets then got guided masterfully down the field, with the golden play the 37-yard bomb by Jets QB Sam Darnold (darn old what?) to the Bills 4.  Bills burn a time out contesting the completion. It takes four tries, but the Bills get the Jets into the end zone ozone. Bills finish up with long bomb interception by Josh Allen.  Jet and Bills tied at 4-9 and still have a shot at winning the Moldy Carpet.

I don’t know…Broncos coach Vance Joseph just looks unhappy. Like he has no friends. He needs to work on his grouchy look. Just doesn’t look ‘coacherly.’

The Greg Kittle Show, brought to you buy a clueless defensive strategy and execution by the Bronco defense, came up four yards short of the all-time record for a TE receiving yards. ALL IN THE FIRST HALF. 49ers botch getting Kittle just one more five-yard reception.

Broncos off-sides specialist Von Miller stacked up THREE of them yesterday. Not to worry, the 49ers tackles practiced for it all week, complete with the ‘whoa there’ effect after the refs blow the whistle.

For 3-10, the Whiners looked like a defensive brick wall yesterday. With top Bronco receiver Emmanuel Sanders sidelined, the Whinos played man-to-man tight D, bumping the young Bronco receivers at the line of scrimmage on every play. It worked and nobody gets fired this week.

Holy Crap, the Raiders won a game. Pittsburgh QB Ben Rothlisberger had to leave the game with an owie, and that tilted the whole field.  Ben’s pretty hefty. Great game that brought back some memories of the incredible rivalry these two teams have had over the years.

STIFF OF THE WEEK: If they’d just lost at least one game to the 49ers, the Cards would be a shoo-in for the Moldy Carpet trophy.  As it is, they still look promising. Tied at 3-10 now with the Whiners, the Cards brought home the misery yesterday with a meagre field goal and a pick-six that decided the whole thing. Lions got a TD chipped in in the 4th quarter to round out the ‘scoring.’ Lions at 5-8 and teetering on respectability. They go to Buffalo next week, so watch out. Cards should lose all three remaining games: Falcons (no gimme), Rams and Seahags.

Pretty soon, we won’t have to write about the Brownies anymore. Winning yet again with some late heroics, the Blanks have thrown more footballs into the stands after a touchdown than any other team this season. Guys, I know it’s new to you, but it really is a regular part of football.

aaaAAAAAAnd That’s the View From the Basement!!!!!