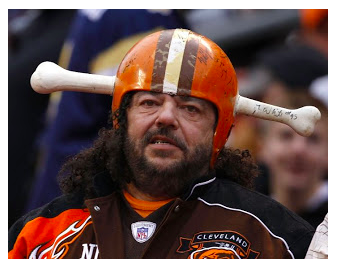 It was a hard-working day in the Dawg Pound yesterday at that place of 7-7-1, on Lou Groza Blvd, a place called First and Last Energy Stadium. The Bleveland Crowns pulled to .500 this late in the season for the first time since dog food was invented. More importantly, they swept the season series with Cincinnati for the first time since 2002. Until the first victory over the Bungles in week 12, they’d lost seven straight to that other orange team in Ohio. Now balanced precariously at 7-7-1, with their fans peeping up over the rim of the Valley of Perpetual Losing, the Blank Helmets have a shot at a winning season next week at the Ravens, the ex-Browns. Ravens will be playing for their playoff lives, so it should be the Game of the Week.

The worst they finish is 7-8-1, so the Brownies still exit the Basement (gotta go 7-9 to be on the Patio, and 6-10 minimum to spend the Winter in the Basement.  But let’s be real: A winning record has passed this way three times since 1989….29 years.  Our most consistent member of the Doormat Division has a shot at getting the hell out.

Almost everybody in the top five has 10 losses now.  The Cardinals and Raiders look like a lock, but the Raiders have to get by the Broncos tonight, and that’s no freebie.  The Jets inch past Jacksonville, who have lost focus here in the late stages, and are winning games. The 49ers keep close, but…the Cards aren’t going to give it away.  Don’t forget the Whiners have the tie-breaker- they’ve lost TWICE to the Cards.

What a game.  Titans QB Marcus Mariota gets a stinger (isn’t that a drink from the 60’s?), leaves the game, and Doormat All-Star Blaine Gabbert comes in and…wins?  Yes. First time in the seven times Mariota has left a game with an owie that the Titans have rallied and won. Gabbert gets a chance next week to fry up the Titans playoff hopes. Don’t put it past him. He’s got the cred.

On the other side of the ball, couch surfer Josh Johnson, in his third game back from oblivion, follows up his first NFL win with a late interception in Titans territory, and then, in a final gasp, throws a pick-six on the last play of the game.  Josh, if you need a couch, we got one for you.

Not feeling yourself?  Play the Cards.  The first place Cruds give up 461 yards, get only 15 first downs, hold onto the ball for a mere 22:56, scrape up 263 yards of offense, and just quietly play colorless ball. They’ve never been flashy. They just lose.

Hot on the Cardinals tail are the stylin’ Santa Clara 49ers, the team that tantalizes with exciting plays, and BONEHEAD FOREST decisions. The Whiners make as many self-inflicted mistakes as any other aspiring Doormat squad, especially one with this much potential for offense. This kind of output takes coaching, you know.  It’s the little things that add up.

Practice Squad QB Nick Mullens, who shows flashes of being a real starter, makes the premier bungle on the last second drive, throwing a hopeless out-of-bounds 4th down heave of a game killer instead of running for the first down with 1:14 left at the Chicago 45.  No guarantee they score, but just…why did you DO that?

Not feeling yourself? Play the Lions.  Did I already write this?  Matt Stafford needs a new team.  Preferably one not in Detroit. Lions hit 10 losses, and it’s like they never left.  Wait…did they leave?  Gonna take a lot of kitty litter to cover up this season.

Just when you thought they’d never win another game, the Bags get swamped in Miami, where the bar was so low, they just could NOT out-horrible the Floppers.  The Dolphins line:  Two turnovers, 11 first downs, 183 total yards, 6 punts, 10 penalties for 95 yards.  The Jags countered with 10 penalties for 97, 244 yards of offense, and allowed six sacks, but it wasn’t enough.  Dolphins beat the Patriots two weeks ago, and, haven’t played since.

Try as they might, the Pats just couldn’t get a loss here, with both teams battling the win like it was dengue fever. Keep away from me!

Leading only 7-0, the Pats fumble to the Bills, who counter with a missed FG, the Pats punt again, only to have Bills punt right back at them. Kind of like a rock fight. The Bills then made the “how not to tackle” YouTube video for a 27-yard rushing TD that the Pats had to swallow. Now 14-0, on the very next play from scrimmage the Bills counter with an snappy interception. Now just plain angry, the Pats respond with a drive-killer INT deep in Bills territory. Not to be outdone, the Bills ‘drive’ 45 yards and die on a 4th and 3 at the Pats 25 by throwing one into the end zone, because who can wait around for yet another tedious first down?

The Pats come out of the halftime locker room, primed from the brilliant adjustments, and open with a sharp interception on the first snap. Bills, completely caught off-guard, and pinned deep in the Pats territory, succumb to a field goal attempt, which splits the uprights. 14-3.  The Pats come right back with a 3 and out, punt, and the Bills, still on the slippery surface, end up with another FG. 14-6.

Encouraged, and down 21-6, the Bills promptly fumble back to the Pats, punt, punt, give up a field goal, punt, and thrown an interception. To keep face, the Pats offered a failed 4th down attempt in there.  Disaster expertly averted, the Bills wait until under two minutes are left to score a Futile TD.  The flow, the momentum, the darkness.

Pats end up mowing the Bills for 273 yards of rushing.  How’s that for “getting nothing done?”

With the season winding down, two teams on the underside of the league whip up just one more wild scoring melee, like the first half of the season featured.  Doormat Ball like an old AFL game!  910 yards of offense!  20 penalties for 258 yards!  Ahead 35-20 in the 4th quarter, the Jets get to inhale another Aaron Rodgers comeback, and keep their Moldy Carpet hopes alive.

One last note:  The Eagles, after attempting to torch their season, were informed that their second-string QB won a Super Bowl title last season (who knew?), and have been experimenting by letting him play, if he doesn’t screw up too much.

ONE WEEK TO GO, DOORMAT DENIZENS!!!!

aaaaAAAAAAnd THAT’S THE VIEW FROM THE BASEMENT!!!!