Free jazz trumpeter Jaimie Branch, and drummer Jason Nazary—longtime friends and collaborators—recorded over two years ago in a shipping container-turned-recording studio in Brooklyn. They pushed steadfast, brazenly into woozy latitudes of electronics that shake, vaporize, and blare. Tour Beats Vol 1, the beastly project by the duo who record collectively as Anteloper, is a four-song EP that reminds EDM producers “remember what you did before the money showed up.”

It was May 2018, a year or so before her screeching Fly or Die II: bird dogs of paradise record, a dark and timely salacious call out of President Orange 45 and his fascist, racist and xenophobic policies—one that would become a critically acclaimed record on all the lists you follow. Branch took up a month-long residency at Pioneer Works, an arts center down the street from her home in Red Hook, Brooklyn. At her behest, Nazary brought by his acoustic drums, electronic triggers, modular FX unit, synths, sequencers, and a myriad of processors. Branch engineered the sessions and matched the rig Olympics by dragging her trumpet, synths, delay/looper pedal, auxiliary percussion, and a Roland TR08 drum machine. Documented explorations ensued.

There is such spirit at work with this project: Branch and Nazary are not concerned with where the endpoint of experimentation lands. Forget just for one second, what the drop is, or even if things are supposed to make sense. “Bubble Under,” the first track in, a bounce dirge four-minute creation with alternating snares, jumps off-map into swampy rhythmic topography. Benefiting from smudgy frequencies and robot-like atmospherics, Branch leads, colors, and enhances psychedelic tellurium energy, by pogo-ing that horn between live and echoed passages until it converts into a ghost-like entity by songs end. 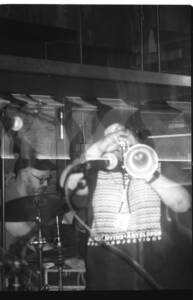 ‘Radar Radio,’ the third song, which does in fact begin with some type of terrestrial programming fed through a sound filter, comes within the closest proximity of sounding anything reminiscent of Miles Davis jazz-fusion creations. Set to a Caribbean rhythm, Nazary keeps the step and sway charismatic while Branch employs the most straightforward performance on the release. It bounces along, meeting the fluctuating bass tones, that change colors towards the end, with ingratiating warmth.

Anteloper as a whole takes the leap every time, maneuvering into weird compositions that feel bold, dare I say authentic. Electronic music did in fact once sound this valiant before six-figure DJ paydays defrauded the creative aspect, and top-tier promoters knew EXACTLY who Kevin Saunderson was.

Granted, Anteloper is not trying to make anybody dance. But they, along with their Chicago-based recording company International Anthem and its collection of bang-up 2020 releases, aren’t insulting folks’ intelligence either.

Trumpeter jaimie branch's horn screams over the kind of unpredictable rhythms with which we're all learning to live.
Read more
Under the Stars