By Tim Redmond
August 28, 2014
Share on FacebookShare on TwitterShare on LinkedInShare on RedditShare on Email 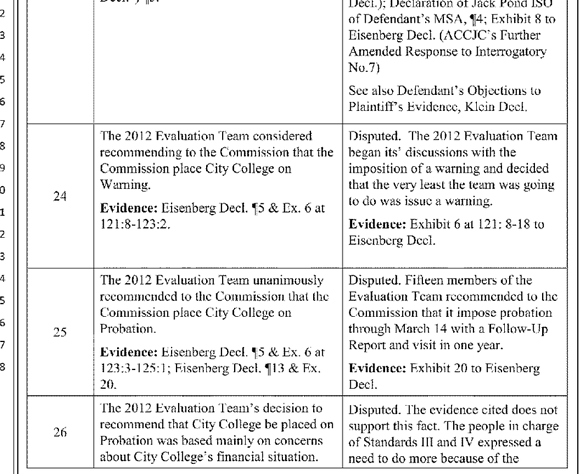 There are so many reasons to love the lawsuit that City Attorney Dennis Herrera has filed against the City College accreditors. It’s going to force this rogue group to show up in court and answer questions, it’s going to give a judge a chance to see just how rotten this whole deal was … and it’s going to bring a lot of new facts to light.

An LA Times reporter has been reading the documents that the ACCJC filed – and came on a stunning piece of information that everyone on every side of this issue needs to read and consider.

See, the ACCJC sent a team of experts to visit City College. It wasn’t a particularly balanced team – most of the members were administrators, only a small number were teachers. And many of its findings had to do with City College not having enough administrators.

But still: Even this biased team suggested that City College be put on probation and given time to fix its problems – NOT given “show cause” notice. The experts that the ACCJC appointed, the agency’s own team, didn’t want to move toward shutting down the school.

That means the ACCJC ignored the recommendations of its own hand-picked team and, all by itself, decided to hit City College with the worst possible sanction.

A lot of the documents in this lawsuit are still not public. The ACCJC has asked for internal stuff to remain confidential. But nobody redacted this gem of information; it’s part of the public court record.

You can read the entire brief here. A lot of it sounds like legalese, but read it carefully; there’s a lot there. The most interesting stuff starts around page 9.

Not only does the ACCJC admit that 15 members (an overwhelming majority) of the visiting team wanted only probation; the agency also admits that not one of the members of the team wanted “show cause” sanctions.

The agency also admits that many members of the visiting team were unaware that Peter Crabtree, who served on the visiting team, was married to ACCJC President Barbara Beno. Some members were “shocked” to learn about what many call a clear conflict of interest.

There’s also a fascinating snippet of a deposition of Tom Lane, who worked as administrative support for the ACCJC. It goes like this:

A: No, they’re inseparable.

Q: And why are they inseparable?

A: Because they are both the same. Dr. Beno is the president of the ACCJC; it’s one and the same.

That, I have to say, is not the sign of a healthy organization.

So we’re still a couple of months from trial and already enough information is coming out to show what a farce the ACCJC and its accreditation process has been. And there’s a lot more to come.