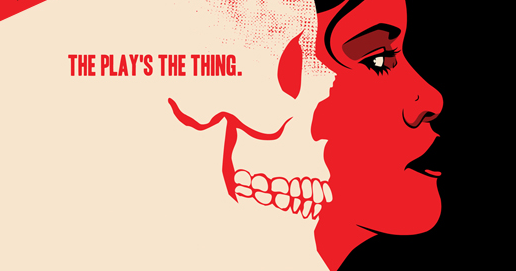 OK, OK, no one actually said that when it was announced that the part of Hamlet — chosen at random a few minutes between curtain time at the Shotgun Players’ latest production (through May 15 at the Ashby Stage), and revealed just after the audience had taken its seats — was being played opening night by David Sinaiko. Anyone who had seen Sinaiko in the Shotguns’ groundbreaking Antigonick last year, or knew Sinaiko from his work with Cutting Ball Theater, realized they were in for an electrifying treat.

But this, after all, was “Hamlet roulette,” an insane challenge the Players had set themselves: Could they memorize the entire play so well that they could play any character at random, with five minutes’ notice?

For the audience, this held a double titillation: With seven wildly diverse actors shuffled between roles, what sort of “Hamlet” would we see tonight? And, feeding a hunger for novelty that had been stoked ever since French legend Sarah Bernhardt stormed stages as Hamlet in 1899, would we witness a female Hamlet, a black Hamlet, a queer Hamlet, one outside the typical Prince of Denmark typecasting?

And then, of course: Would the two-and-a-half hour play be any good?

Well, I’m only able to speak on one of the 5040 possible permutations of this “Hamlet,” but it was absolutely terrific.

Director Mark Jackson took a huge risk here, and maybe the tightrope-like conceit added necessary excitement and unfamiliarity (not to mention a little panic, surely, in the actors). But the staging and clarity of this “Hamlet,” on the night I saw it, transcended any theatrical stunt and polished Shakespeare’s old yet ever-relevant chestnut anew.

And diversity did invest the night with novelty: Sinaiko, not the usual brooding young man type, brought impish energy packed into a silver-haired, Jon Lovitz-ish frame to the main role, giving the prince a willfully devious spin, tamping down any teen angst, and investing Hamlet with more scheming Iago than sophomoric emo. This approach tipped Hamlet’s more unhinged soliloquies into a bitter, comic irony, even as it somehow sapped the famous incestuous scene with his mother, Gertrude (Megan Trout, icily regal and unblemished by guilt), of its icky power.

That Sinaiko appeared to be more mature and experienced than his supposed elders definitely made “To be or not to be?” a much more mortal question — no melodramatic youth’s posturing here — and lit the graveyard “Alas, poor Yorick” scenes with soft poignancy. What does it mean to recall lost childhood friends in middle age, and what randoms acts from your life will survive to define you in the future, despite all your best efforts to control your own narrative?

El Beh was a strong and blustery Claudius (in her hands he seemed more self-absorbed than treacherous, and almost pitiable); Cathleen Riddley an obtuse yet well-meaning Polonius; Beth Wilmurt a dashing, emotionally wounded Laertes. I had come excited to see a friend, Kevin Clarke, and was at first disappointed when he drew the briefest roles as Hamlet’s father’s ghost (played as a bone-chilling enigma) and the gravedigger (a wry joker).

But it was a testament to Jackson’s direction that even the tiniest parts held weight: One great trick of the night was that, when not on the boards, those playing the small roles sat discreetly on the sidelines, reading along with the script in case another actor needed prompting. (Astonishingly this happened only twice.) So everyone had equal time before the audience, even if they were acting as a “net” for the acrobatic turns onstage.

The real revelation for me, however, was Nick Medina in the role of Ophelia. We all chuckled when his role was announced, and maybe settled in for some camp drag interpretation. But the broad-shouldered Medina dug deep into the lovestruck, doomed girl’s psyche. More than any Ophelia I’ve seen before, he made us identify with her before pulling us into her bewildered heartbreak. Instead of a gorgeous waif, here was a slightly big-boned, shy Ophelia who couldn’t believe someone like Hamlet would ever look at her, let alone write whole poems about her. The house fell into stunned silence when Hamlet cruelly attacked her out of nowhere, and I wept when she drifted to her fate beneath the willows.

A tight, modernized script and superb staging (plus effective set, harking cutely back to “A Chorus Line,” by Nina Ball, lighting by Heather Basarab, and striking and necessarily versatile costumes by Christine Crook) helped the two and a half hours fly by. I left eager to see the play again, with any of the other strong players taking a shot at the lead role — or twisting the bit parts to their own, unique ends.

“HAMLET”
Through May 15
Ashby Stage
www.shotgunplayers.org