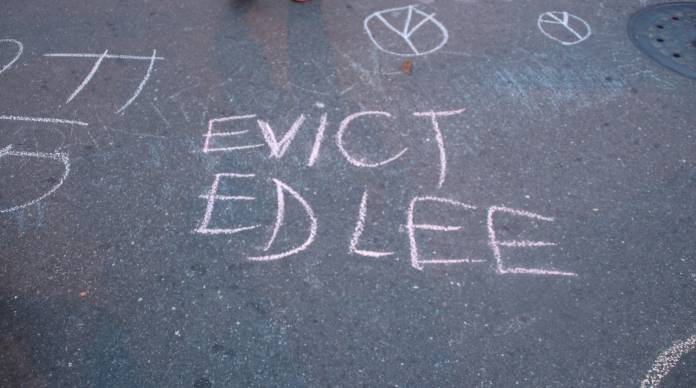 Live video posted by Edwin Lindo reveals protestors’ and hunger strikers’ concern regarding lack of media and protestors at the scene as Mayor Lee arrived.

One the twelfth day of the hunger strike, Mayor Edwin Lee arrived at the Mission Police Station, at Valencia and 17th, through the back entrance. Maria Cristina Gutierrez, 66, was the first to see him as she sits in the public space of the station. Media wasn’t allowed to enter the premises and the other hunger strikers remained outside. Lee’s visit came ahead of a rally planned for tomorrow, as hunger strikers and their supporters are scheduled to march to City Hall.

“I just got out of the toilet and I saw him and for a minute I couldn’t believe it,” said Gutierrez who is on the twelfth  day of her hunger strike. Gutierrez said that she first thought she may have been imagining it; Mayor Lee has a notorious reputation of remaining absent and or ignoring concerns from the community and in recent weeks has been largely invisible. “I didn’t allow him to say anything to me because I don’t want to speak to him until the five of us are together and we asked him for a meeting tomorrow, we asked him publicly. He tried to sneak up on us because he knows that at this time everybody is at work,” she said.

No media was allowed inside the premises of the station when Mayor Lee spoke to Gutierrez. She recalls the interaction: “He’s a coward, he’s a coward and he has no dignity. My god, I can’t believe it but he didn’t get away with it. He needs to talk to us with respect,” she said. “I told him I don’t have nothing to listen from him until all five of us are together because this is a movement and we have five people here. I told him that he should be ashamed of himself, he’s allowing for all sorts of racism to go on in the police force. I also told him that he’s hiding and protecting a murderer” she said.

Gutierrez noted that Lee was not very receptive of her comments and she felt he was shocked because of how bluntly she confronted him. “I told him, we will see you tomorrow and we will pray with you. I will pray for you that your heart softens and then we will see where you are at,” she said

Mayor Lee stayed inside the police station for around thirty minutes. Mayor aides stepped outside to speak to the rest of the hunger strikers outside “They said the Mayor would like to meet you” said Edwin Lindo, who is on thirteenth day of his hunger strike.

In an over the phone statement, Christine Falvey, a spokesperson for the mayor’s office, that Mayor Lee had known about the hunger strike since it began, was monitoring the progress and had come to the Police Station on Monday after hearing about their request for a meeting.

Hunger strikers have been asking for Mayor Lee to visit them from day one and had recently announced to march to City Hall to ‘knock on mayor’s door’ after not receiving a response from him.

Falvey said the Mayor had arranged his schedule accordingly just to meet them. “He really wanted to do this, so he could hear them out and tell them about police reform efforts”. The hunger strikers said they didn’t want to mete the Mayor as he arrived unannounced and want to go ahead with the community effort in shape of a rally tomorrow. However, Falvey says “There’s nothing scheduled that the mayor is meeting with the hunger strikers tomorrow.”

Outside the station, Sellassie Blackwell, one of the hunger strikers confronted police officers who stood outside the back entrance of the Police Station as Mayor Lee left. “You guys shoot us dead, you shoot us dead like animals. Why you gotta kill someone? Shoot them in the fucking knee or something,”  Blackwell said, as supporters also joined in. “We should be able to trust the San Francisco Police Department. Stand up, wake your union and do the right thing,” he said. As the officers walked back to the station, Ilyich sato, better known as Equipto made one last appeal: “You can help us fire Chief Suhr, please. Your words matter, your voice matters, man! Unless you condone racism like Suhr,” he said.

IIke Pinkston, one of the hunger strikers, wasn’t shocked at Mayor Lee’s arrival at the station. “I knew it, believe it or not, I always thought he was going to come. On day four of the hunger strike, I told someone I bet you he will either come here in person or he will send his entourage to pick us up,” send Pinkston

Edwin Lindo, said he thinks that Mayor Lee snuck up on them to avoid the public rally tomorrow. “I think he’s a bit scared right, he is nervous. The world is watching him right now. He wanted to pre-empt the power of  the community and he knows because he was a community organizer. We are playing chess not checkers and we will get a check-mate, Chief Suhr will resign and or be fired,” Lindo said. Lee’s aide came outside to speak to the rest of the hunger strikers. “They came outside and said the mayor would like to speak with you and we said no. our meeting with him is tomorrow. That’s when we will meet him.”

Equipto, along with the rest of the ‘Frisco 5,’ still feels that Mayor Lee’s arrival is a victory for the campaign. “He tried to sneak up on us, we know that tomorrow’s meeting he wouldn’t want the press to be there, but my mother told him she will pray for him that his heart softens. I swear to god the more pain he brings to my mother, the more I will make his life hell,” he said.

As the news spread protestors gathered to support the ‘Frisco 5.’ At the time of the filing of this report there’s no response from Mayor Lee’s office. However, supporters of the ‘Frisco 5’ feel that Mayor Lee’s unannounced visit ahead of tomorrow’s march has further angered the community. “You’re trying to tell me the mayor couldn’t walk past us into the police station, he had to sneak through?” asked Pinkston.