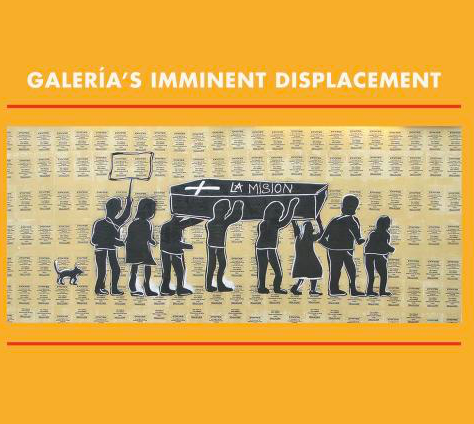 A  secretive landlord has handed Galeria de la Raza an eviction notice after talks with Sup. Hillary Ronen broke down last week as the property manager representing the owner walked out.

Ani Rivera, director of the gallery, which has been a community icon for more than 40 years, told me that the notice arrived one day after Ronen and community supporters held a press conference denouncing the landlord for refusing to negotiate in good faith.

The property is owned by the Lily Ng Trust. The trust is represented by GBA Realty.

Lily Ng is dead, and GBA has refused to give Galeria representatives the names of the people who currently control the trust.

Trusts are not typically public documents in California.

“We tried, we really tried to come to terms,” Rivera told me.

GBA’s representative told Rivera that the rent would be increased from $3,127 a month to $6,200 – an impossible increase for a small community-based nonprofit.

Worse, GBA said that Galeria would be responsible for bringing the entire space up to modern codes for handicap accessibility, which could cost close to $1 million. “And that’s just for a two-year lease,” Rivera said.

“We are upset at the fact that, as a community cultural institution, we are being pitted against the disability community, which we support,” she said.

Code upgrades are, by law, the responsibility of the property owner, not the tenants.

The three-day notice to pay or quit demands that Galeria write a check for the new, higher rent, which “isn’t possible at this time,” Rivera told me.

That means that the landlord could decide to start eviction proceedings – which would set off a huge furor in the Mission.

We will keep you posted as this develops.