SEPTEMBER 15, 2014 — Imagine you’re a college student. Classes are picked. Textbooks have been bought. Your boss finally accepted your schedule request and child care is arranged for the times you have class.

Then, bam, that class you needed is cancelled. It might be offered on a different day, at a different time—but can you make it work? Maybe there’s no alternative section offered.

It’s a reality that students, as well as faculty, have to deal with every semester at community colleges across the state as local administrators try to preen course offerings to a “prudent” level that aligns with the amount of state funding each college receives based on enrollment numbers.

It’s particularly challenging at City College, where the threats over accreditation have helped drive enrollment down – and 171 classes so far have been cut because too few students have signed up. But thanks to a special measure by state Sen. Mark Leno, City College is guaranteed stable funding during the accreditation process, leading some faculty and students to ask:

If we have the money, why the cuts?

It’s frustrating for Josh McPhail, a City College student who is trying to complete the course work to transfer to Texas A&M. “All four of my classes have low enrollment,” he told us at an August rally. If those classes are cancelled, and he can’t find other sections or similar credits, he won’t be able to transfer.

“Our argument has been that the money is there. It’s money that was designated from the state for us because they understand that we’re in crisis mode,” AFT Local 2121 President Tim Killikelly said. “We’ve already lost so many people in this accreditation crisis.”

That includes both students and teachers: Many faculty are part timers who aren’t paid if their classes are cancelled – and if they can’t make a living at City College, they may look for work somewhere else.

According to documents we’ve received from the City College administration, 45 classes were cut before the first week of instruction, including four classes that had at least ten students enrolled. By the second week of classes, 114 more were cancelled, and eight had at least ten students. Ten more were cut in the third week – after students had begun attending and faculty had begun teaching.

Administrators say that many of those classes had at least one, and sometimes multiple, alternative sections offered, although at different days and times.

“We have 3,200 fewer students than last fall. The accreditation crisis is part of it,” said Jeff Hamilton, director of external affairs for City College. “The stabilization funding is temporary and was not designed for us to do the same things we’ve always done. I don’t think cutting 171 sections is a catastrophic thing to do in our situation.”

Despite the college’s overall low enrollment, deans still have a lot of discretion over which class sections they cut. And there’s been some confusion about what the rules really are.

In theory, according to both administrators and the teachers’ union, classes with fewer than 20 students are subject to cancellation. In practice, nearly everyone at City College agrees, that’s a very fungible number, and in most years, many, many classes with between 10 and 20 people have been allowed to continue.

“We have not gone by 20,” Killikelly said at the August rally. “And we know that we have the funding to pay for classes.”

In fact, he argued, “the state Legislature understood that the crisis has been created by the ACCJC. The money has been allocated to stabilize the college.”

As faculty and students demanded answers at the energetic rally, Vice Chancellor Susan Lamb came out of her office to tell the crowd that most of the cancelled classes were severely under-enrolled.

“Many of these have only four students,” she said.

But just hours earlier, an email had arrived for department chairs with a very different message.

In that email, Dean Douglas Bish told his chairs that any classes that had fewer than 15 students might have to be cut.

“If the class has met once and the instructor hasn’t given out enough add codes to get it above 15, then we need to cancel it,” Bish wrote in the Aug. 24 email to department chairs in the School of Fine, Applied and Communication Arts.

“There’s a lack of clarity about what would be cut and why it would be cut in this process,” Killikelly said. “People are hearing stories and it’s leading to more uncertainty.

Hamilton acknowledged that communication systems are in the process of being improved and that the administration is doing everything it can to act transparently.

We’re really trying hard to be transparent,” Hamilton said, “because not having that info out leads to speculation and rumors.”

Certain types of classes are eligible for an exemption from minimum enrollment thresholds, according to the faculty union’s contract. 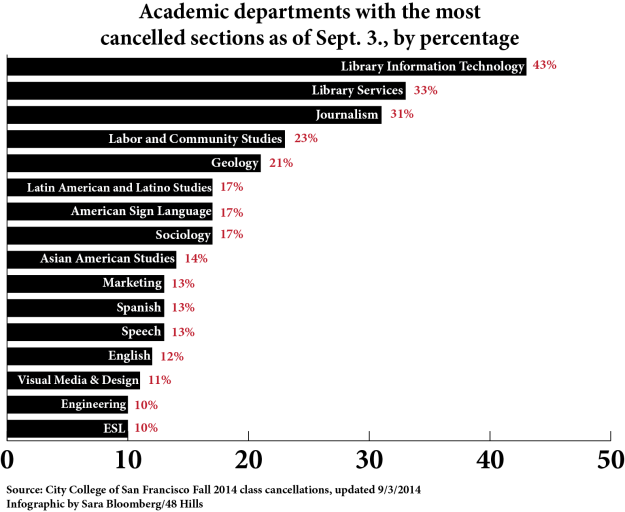 The exemptions classes include:

1. 3rd or 4th semester courses in transfer or vocational sequences;

2. Classes with approved capacities below 20 students;

3. Classes where considerations of safety require a lower minimum;

4. Courses for which enrolled students have no alternative enrollment option;

5. Courses for which smaller class size is deemed a valid educational

requirement, for example, basic skills and classes for the disabled.

Still, around a dozen of these potentially exempt classes were cancelled, Killikelly said, leaving some students with no alternatives.

“Chinese 1b was cancelled and students need it. It only had 12 enrolled,” Foreign Languages Chair Carol Reitan said. “The discussions with the dean went much better than previous semesters but I couldn’t save that one.”

A copy editing class was also cancelled. It had only three students enrolled but it’s a required class for the journalism degree that’s recommended in the third semester of study, according to the degree requirements posted on the journalism department website.

Journalism Department Chair Juan Gonzales still couldn’t save that class but is trying to bring it back as a late start course.

“We’re gonna reach out to [those students who were already enrolled],” Gonzales said, “but now they’re gonna have to come twice a week instead of once a week” because they’ll have to cover the same amount of material in less time.

Hamilton wouldn’t comment on specific cases, but insisted that the college is trying to be as prudent and efficient as possible while still meeting the needs of its students.

“It’s our job to design a schedule that meets the needs of our students. Where’s the demand? We need to focus on the curriculum and the classes that people are demanding,” Hamilton said.

But for students seeking special training or the classes needed to transfer, demand and popularity aren’t the most important elements. And while enrollments at community colleges all over the state are declining (which is typical when the economy is getting better), City College has been hit particularly hard – in part, the Legislature agrees, by elements outside of its immediate control.

And cutting classes, if it discourages students, will just make matters worse.

None of the deans responded to requests for comment.