San Francisco is descending into Reefer Madness. The supervisors are trying to pass regulations that would implement Prop. 64, which legalizes adult use of cannabis, by Jan. 1 – but a lot of the supes seem to be bending to the will of the anti-weed folks and loading up the bill with rules that will make it almost impossible for a successful retail industry to operate in the city. 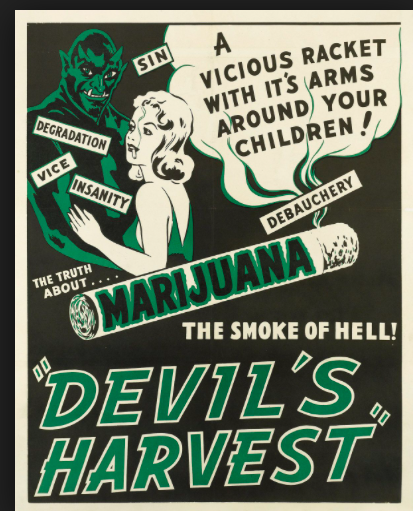 One of the big issues is this crazy, crazy thing about keeping cannabis outlets at least 1,000 feet (and some want 1,500 feet) from a school.

I have two kids. They walked or took the bus (one still does) to public schools. They passed by liquor stores and stores that sell cigarettes (including flavored tobacco products aimed at teens) and soda (including a “teen gulp,” 128 ounces of sugar-laden diabetes-syrup). The liquor stores and the soda stores advertise – big signs that say “come in her and buy booze or Coke. Hey, get a Teen Gulp for only $1!”

There are no rules that say a liquor store or a store that sells tobacco or the Teen Gulp needs to be 1,000 feet from a school. And frankly, those products are worse problems. Any kid can walk in the door.

The existing medical marijuana dispensaries have security guards who carefully check every person who tries to enter. They have no flashing neon lights urging you to buy buds. Most of the time, you can pass them by and not even notice they exist. I suspect the new adult-sales outlets will do the same (and the city could easily ban big signs and on-site ads).

The only thing the “1,000-foot-rule” does is concentrate the stores in a few neighborhoods, because much of San Francisco is within 1,000 feet of a school.

I can tell you from personal experience: Teenagers are no more or less likely to start smoking pot because there is a place where adults can buy it nearby. (They are, on the other hand, easily able to get alcohol by offering an adult who needs some extra money $5 to buy them a bottle, from any of the ubiquitous liquor stores near schools, and parks, and Muni stops, and everywhere else that teens hang out.) And with companies like Ease around, anyone with a card can get cannabis delivered, anywhere, including to a café near a school.

Again, I’m a parent: I’m not in favor of kids smoking pot, or drinking, or smoking tobacco, or drinking a Teen Gulp. We can educate them about personal health, and that works (to some degree). Prohibition never has and never will.

But there is no logic to the anti-cannabis approach. It’s is all a campaign orchestrated by a small but vocal group of people who still think marijuana is evil.

Meanwhile, the supes really could create an equity-based permit system, much as Oakland has done, that would set aside a significant number of the new permits for people who have been impacted by the War on Drugs.

But this whole idea that we can save the children from the Devil Weed by forcing the entire industry into a few parts of town (which isn’t fair anyway) is just silly. Cannabis is, by any rational standard, no worse than alcohol or tobacco, which can be sold in any neighborhood. We are still, apparently, reeling from almost a century of anti-pot propaganda, which started off as a racist message and evolved into the racist War on Drugs.

There are hundreds of liquor stores in San Francisco, hundreds of places that sell tobacco and Diabetes Juice … and fewer than 50 places that sell medical cannabis. The city might, maybe, approve another 50 for adult use. And the supes are scrambling to limit them, keep them out of their districts, treat them like a social problem …

Sorry, this is madness.

The current version of the legislation comes before the Land Use and Transportation Committee Mon/6 at 1:30pm. I can pretty much guarantee that the anti-cannabis folks will be out in force. But the vast majority of this city voted for Prop. 64. The supes need to stand up to this nonsense.

The robot sidewalk delivery issue is back. A measure that would require a permit for sending big, bulky machines rolling along the sidewalk is at the Public Safety and Neighborhood Services Committee Wed/8.

This is mild regulation. I could easily argue that the city should ban robot delivery vehicles until we can get a handle on how we should regulate them, and this falls short. But at least it would require permits and make some effort to determine whether putting robots on the sidewalks are a good idea.

The meeting starts at 10 am.