London Breed now leads by 1,580 votes, with about 25,000 votes to count – and it’s entirely possible that we won’t know the winner until the end of next week.

The final ballots that will be counted are 14,000 provisionals, some of them from people who registered on Election Day. The conventional wisdom is that those ballots will favor Mark Leno and Jane Kim.

But the trend toward Breed has been consistent with the late vote-by-mail ballots; she’s picked up votes every day since Election Day. And if that trend continues in the next two days, it’s going to be hard for Mark Leno to overtake her. 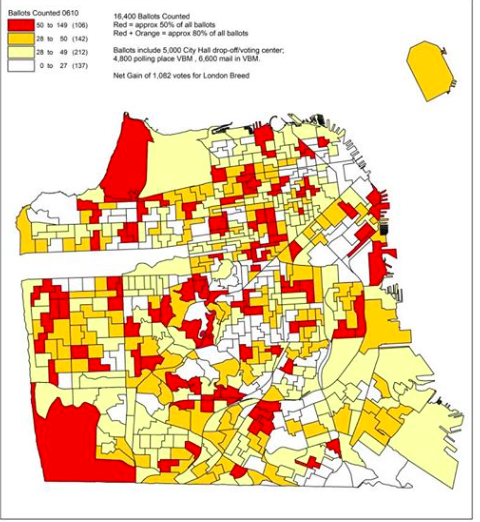 With a net gain of 1,082 votes for London Breed, this now means that Breed has achieved a margin of 2,726 votes out of 73,810 counted since election night. this is pretty identical to the absentees counted on Election Day — where she had a margin of 2,896 votes out of 78,223 cast. The notion that late VBM voters more closely resemble Election Day voters than early VBM voters doesn’t seem to hold up.

There appear to be approximately 25,500 ballots left to count, although the DOE has appeared to disqualify (for now at least) almost 4,000 of the 14,000 provisionals.

At this point, Breed is clearly the favorite. However, from DOE:

So if it remains close in the next day or two, we could be biting our collective nails until maybe next Friday.