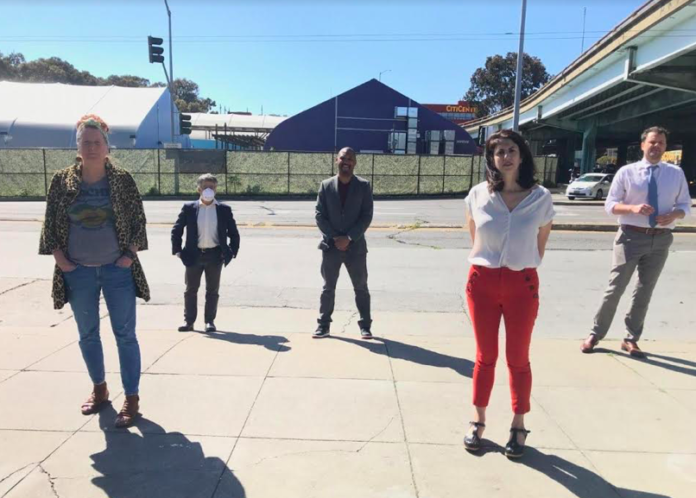 The first resident of a local homeless shelter tested positive for COVID today, and five supervisors upped their demand that the city move immediately to put unhoused residents in vacant hotel rooms.

“We have the hotel rooms, we have the money, and we have the staffing,” Sup. Hillary Ronen said. “Why aren’t we doing this?”

Ronen said that the Breed Administration has given “every reason in the world why it can’t happen. … why aren’t we doing what makes public health and common sense?”

Joined at a press conference by Sups. Matt Haney, Shamann Walton, and Aaron Peskin, Ronen vowed to introduce emergency legislation mandating that all unhoused people who are capable to taking care of themselves be given a private room where they can shelter in place.

Peskin pointed out that the city has 35,000 empty hotel rooms. Because of pressure from the supes, he said, the mayor has agreed to move out of the Division Circle Navigation Center, where the first case was found, anyone who had close contact with that person and anyone at high risk for health problems.

But that, the supervisors agreed, is nowhere near enough.

“We’re here to express the disgust we have with the Human Services Agency and the Department of Public Health,” Walton said. “We have been trying to work behind the scenes for four weeks to get people out of congregate settings.”

Peskin said that “history will judge us on how we deal with this population in this period.

Haney said that it’s “very sad” the first case has been reported in a shelter, “but this was preventable. We should not have hundreds of people in congregate environments. … the mayor could do this right now.”

Jennifer Freidenbach, director of the Coalition on Homelessness, said that “people on the streets feel like the city is leaving them here to die. We are really afraid.”

In medical terms, she said, people who live on the streets present as 25 years older than their chronological age. That means vast numbers of unhoused people are at high risk.

“For weeks those hotel rooms have been unoccupied,” she said.

And yet, the Breed Administration has maintained that this was not a priority.

As Peskin noted, the virus is circulating and will circulate fast in the homeless community – and the city is running out of time.