'Everybody needs grace,' says Draper, whose latest is a fusion of lyrical California soul and verses like modern-day hymns.

There are times when I hate the Bay Area. On everything I love.

According to the Public Policy Institute of California, “the highest rate of property crime [is] in the San Francisco Bay Area, which had 2,608 property incidents per 100,000 residents”—more than Los Angeles, San Diego, Stockton, or any other metro area in our populous state in 2021. The Bay Area also leads the entire nation with the highest rate of car break-ins, aka “bipping,” and has developed a notorious reputation for other forms of thievery like “scamming” and “boosting.”

You can’t walk around here without seeing a smashed car window and its lifeless glass shimmering in a parking lot, or worse, an actual robbery happening in front of you in daylight—something I have personally witnessed multiple times. Sadly, no one is safe from the unpredictability of this regional crime wave—not even a beloved East Bay rapper, who has spent the past decade making music and being a pillar for other creatives in the scene.

In December 2021, Mani Draper—a lyricist, podcaster, producer and member of Grand Nationxl—happened to be in the wrong place at the wrong time.

“They caught me slipping,” he tells me during our conversation at Bardo Lounge in Oakland. “There’s no other way to put it.”

His car was broken into in a parking lot. It was daytime, and he had stepped away for a moment. A vehicle pulled up, did a smash and grab, and took off. He lost his equipment, including a laptop and flash drive with all of his recording projects at the time. He was near-finished with another studio album, but without his software, he never saw those songs again. 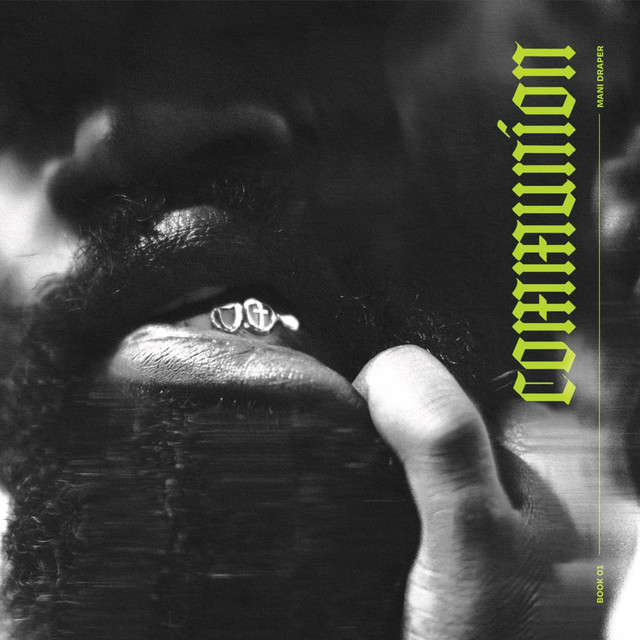 To be clear, Draper is a linebacker-sized Bay Area dude. He knows these things happen, and when he parked his car, he wasn’t far and was still alert. All of these factors weren’t enough to prevent the flash robbery. But throughout it, Draper maintains a calm centeredness that only growing up in Richmond can bestow on those who know about struggle.

“Being from the Bay, we’re trying not to live on edge or live in fear,” he told me. “Let’s give folks grace. But sure as shit, it’s what was happening.”

It wasn’t easy, yet after losing his “life’s work,” the emcee went back to work. Suddenly confronted with a choice to give up or start over, Draper reached deep from his meditative foundation and within a week—with the support of his friends and family—generated one of his most profound solo projects to date: Communion.

“I read all the definitions of communion,” he says. “It’s the sharing and gathering of intimate thoughts, especially on a spiritual level.”

The concept was partially inspired after his experience with losing it all, while simultaneously attending classes at 510 Media—a space for entrepreneurs and innovators to “get our shit together and explore ourselves beyond surface-level meanings.”

The result is serendipitous and undeniably cathartic. Communion is a six-track project that navigates loss, street life, introspection, truth, and humility. The subjects and inspirations range from the death of Memphis rapper Young Dolph (whose government name is Adolph Thornton, who Draper honors in a track titled “A.T.’s Gospel”); to late night dice games in Tulum, México; to underground lessons on “White Label NFTs”; to wearing ‘98 Girbauds and summoning Juvenile’s 400 Degreez while consuming “strawberry Fanta, jalapeños, and a two piece.”

It’s an organic project, and one that emerged from the independent rapper’s desire to create—rather than destroy—when confronted with a potentially life-altering scenario.

“I lost it all and had to build it back,” says Draper. “Creativity is about growth. We’re all slowly healing from trauma. I’m not the only one going through it. We all need to win.”

His determination and sense of reverent wholeness is evident in his collaborative approach, which features a healthy mix of classy production from Kevin Allen and Rex Life Raj, as well as vocals and guest verses from SoLauren, Brookfield Duece, Passwurdz, and Allen.

For those who know Draper and what he has been through, the album has taken on a renewed life. After its release on March 11, Tweets and Instagram stories shared a collective respect and appreciation for the achievement; local comedian King LangBang put it eloquently when he said, “[The album] shows the result of common unity meeting neo-trap music straight out of Richmond, CA.”

The tracks are a fusion of lyrical California soul, modern day scriptures, and hymns as rap verses—akin to a biblical retelling of life in the modern Bay Area—with all the “scamming and bipping.” It’s a style Draper has dubbed as “neo-mobb music,” which is a reference to the 90s East Bay era of dark, synth-heavy sound that was popularized by Vallejo rappers like E-40 and Celly Cel, but with an added neo twist. It’s defined by the sinning and singing, the praying and preying, and everything complicated that happens in between those extremes.

“Everybody needs grace,” says Draper. “The sinners, hustlers, pimps, killers. We’re all living in scarcity. We all need grace and gratitude.”

That constant tension between the sharp edges around us and the soft moments inside us is what Draper’s music highlights. Rather than focusing on trendy topics or formulating a gimmicky superficial image, he remains true to himself and offers a communal look into what it means to “ascend together” in an unfiltered, selfless way—especially if it involves honesty and reflection.

“Freak put up the bread for my album, don’t he know that I can’t do this without him/ Them n***** stole my life’s work, why I ain’t do shit about it/ It’s killing Kev and I don’t wanna let him down/ I ain’t slept in a month, I know how crazy that shit sounds,” he raps on the opening song, “Communion.” He continues his confession with, “A mogul off a pound I wish Ted can see us now/ In the VA texting May by June-July I’ll be back straight/ When promises take too long, are you sure you can bear the weight?”

His bars both acknowledge the loss he experienced while simultaneously thanking the people who helped him get back on his feet with financial and moral support.

After recently returning from a trip to Amsterdam—where he connected with Dutch artists The New Originals, and learned about “the value that exists beyond the Bay” in ways that “encourage the threshold of creativity”—he’s back on his soil, finding ways to stay rooted and connect with others to build a “collective pool of equity” despite the bullshit.

Last week, he performed at the season opening home game for the Puma-backed Oakland Roots, something he said was a lifelong dream for him as a soccer fan. It was a fitting homecoming for Draper after being overseas—to be back among his folks, among his community, among his literal and figurative roots.

Through it all, he’s remained a beacon of positivity and inspiration for those around him, and he feels equally indebted to his creative unit.

“My value is unlocked when I’m with my best people. This project is what it sounds like, feels like, looks like. If someone around me that I trust tells me I can get better, then I can get better. Nothing is more valuable than community,” he declares.

You’ll experience that feeling of cathartic communion in Communion: Book 01. He hints at future “books” to be shared with listeners soon, a testament that no matter life’s circumstances, Draper will have something genuine to grace his fans with.

How Bay Area graffiti led me to a life of writing