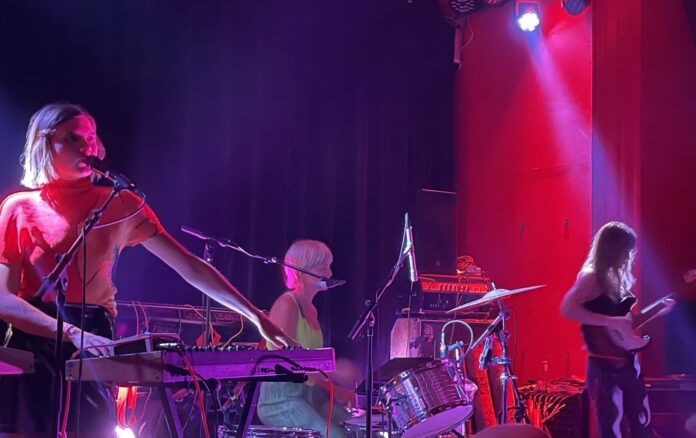 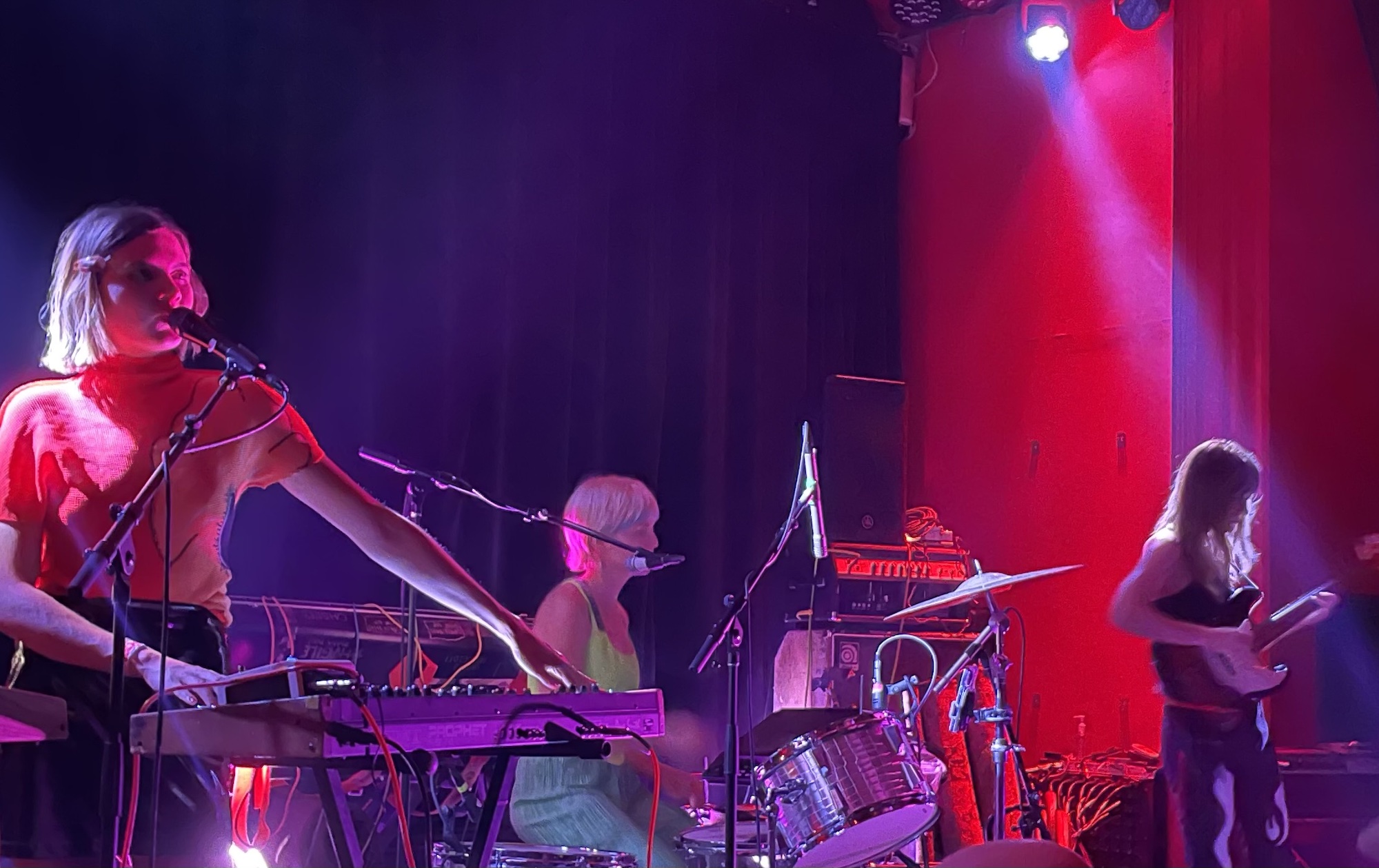 The power grid in California was at dangerously high levels, according to my text alerts. It was freaking hot.

The extreme heat was causing The Chapel’s ceiling to perspire. Intermittent drops of condensation kept missing my very tasty Moscow Mule. But it was a different kind of hot mess on stage that September 5—Labor Day, for those keeping score.

Izzy Glaudini, lead vocalist and synth player for Los Angeles-based post-punk band Automatic, is having trouble finding a working patch cord. The connection between those keyboards and the amps appears to be faulty. The heat in the venue continues to rise as she and the stagehands work tirelessly to solve the problem. Set times are at least an hour behind schedule. Glaudini exchanges irritated looks with drummer Lola Dompé, but it’s all for naught up in this piece.

It’s the first of three sold-out nights for the former San Francisco garage rock band Osees, who are now based in LA and have brought out mostly 400 sweaty, grizzled, unshaven, stinky AF white dudes. Support acts Bronze and Automatic are also on the bill.

These festivities mark the start of a three-month celebration of The Chapel’s 10-year run of booking talent, relying on instinct, taking chances, and remaining an independent venue. That night, a packed house politely waited for Automatic to sort out the technical difficulties and go on.

I was not fooled—the bros were there for the Osees (and a precious few for local underground favorites Bronze). The group’s frontman, the Mission’s favorite adopted-of-sorts son Jon Dwyer, explained to me in 2015 that moving to LA about 15 years ago afforded him the luxury of buying a home. It was something that he would not have been able to do staying here. At one point, we both lived in the same apartment building on 17th Street, in the Mish, he on the first floor and I on the fourth. After a night of drinking, those living room jam sessions emanating from his apartment let me know I was on the right street, no matter how twisted it appeared.

But that night, Automatic was taking everyone on a trip. The group has put out two bold albums in three years, with songs that owe a lot to a specific type of post-punk, with B-52s-style vocals, ESG jitters, knotty-harmonized motorik work residing somewhere between Suicide and NEU! This band has propelled its mood forward. Closing your eyes, one could see the ghost of Ian Curtis, enraptured in some new wave fervor and wearing that iconic raincoat.

Automatic uses Kraftwerk robotization and visuals that hit like Saturday morning sci-fi flicks spoke to the heaviness that runs through society. On their debut Signal, the group discusses isolationism through our electronic devices (years before the Great Reset—because that’s what we’re calling now, right?) Late-stage capitalism having no problem makingobnoxious profit while society burns to the ground figures on the recently-released Excess. Isn’t this the kind of stuff made for dancing? They are, after all, on the Stones Throw label. That’s Peanut Butter Wolf’s imprint, with just enough onions to release compelling music from all corners of the genre multiverse—from Madlib to Mndsgn, Benny Sings to Maylee Todd.

Dompé sets a crisp half-time disco cadence for Halle Saxon-Gaines to cut those deep plundering bass notes over and over as Glaudini fires up the magical time-trip frequencies on her trusted Moog Subsequent 25. With “Skyscraper,” that chewy shape-shifter aura wafts from that Moog, and the crowd lifted their phones, took photos, recorded snippets of the undeniable groove, and sung the doom-so-good hook: “Change/If you want to (If you want to)/Or stay the same/In the end, there is no difference/Shame/You have to (you have to)/Play the game/Every dollar gets you off.”

We took in those siren alarms blaring at the top; they were the ghost of Gary Numan for old heads, and all the shit Kanye sampled before succumbing to mental health issues for new jacks.

Automatic, providing the proper access, was hitting us all in that good place.

Peep the coolly-detached “Venus Hour,” with wood-block accents and bongo samples: It was Bow Wow Wow no-wave showcasing post-punk at its most rudimentary state. An Automatic touch the hands of their foremothers in “NRG,” delivered in a cathartic frenzy, offering the best homage imaginable to the Go-Go’s—quite appropriate, given Automatic named itself after a song by the new wave legends.

“New Beginnings,” with its cold-wave attitude, Devo-automated lyrical delivery, jarring snares, and handclaps. This trio and their 50-minute set mesmerized the crowd like a blast of air conditioning, serving up clarity. Driven by the beat machine that is Dompé—daughter of Bauhaus’ Kevin Haskins—with that right shoulder working double time, attacking with precise meter.

Lockdown was horrible. We should be thankful to be experiencing live music in a venue. Together. While the crowd moved with that post-punk sway, and gave that bruh head-nod in acknowledgment, Glaudini had a shit-eating grin square on her mug. This trio of women danced folks out of they damn shoes.

Gigs and gems galore as we fete "The Gathering" at The New Parish, Elvis Costello at GAMH, Joan Jett Fest, and more.
Read more
Music