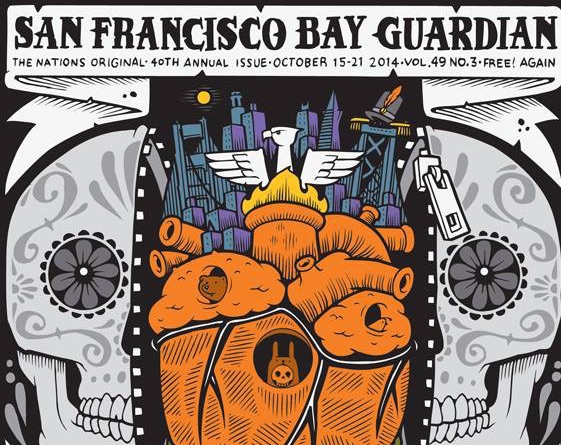 Progressive news source will relaunch with Best of the Bay, election endorsements

In an newsletter announcement today, the team behind the “Bring Back the Bay Guardian” campaign announced that it had raised enough funds to secure its 50-year archives and begin relaunching major features. The Bay Guardian ceased operations in October 2014, when corporate owner Black Press deemed it financially unfeasible.

The progressive news source’s two-month Indiegogo campaign, launched by former Bay Guardian editors and publishers (including this writer and 48 Hills editor Tim Redmond), raised $28,386 from 253 individual donors. When combined with outside and matching donations, the team determined there was enough money to secure the archives and relaunch major Guardian features like Best of the Bay, the Clean Slate election endorsement guide, and the annual GOLDIES arts awards.

For now the Guardian will be an online entity, although the team hopes to print and distribute some major features. The Guardian is operated by the 501(c)(4) non-profit San Francisco Center for Newspaper Preservation. More information on the campaign and the relaunch can be found here. The full newsletter text is below:

WE DID IT! Thanks to our generous IndieGogo campaign supporters and matching donors, we raised enough to BRING BACK THE BAY GUARDIAN! Thank you to everyone who is helping keep Bay Area journalism local, independent, alternative, and lively!

Our next steps: Build out a new Bay Guardian website, secure a better storage space for our 50-year archive, and launch voting for the one-and-only Bay Guardian BEST OF THE BAY. We’ll also be working on opinion pieces, election endorsements, and in-depth reporting, along with our allies at 48 Hills.

You can still contribute by mail!

THANK YOU AGAIN. We’re very excited to enter this next chapter of Bay Guardian history.