A rally/march is being organized Saturday, January 4, at noon, at Powell and Market Streets in downtown San Francisco. It’s part of coordinated protest actions across the US in response to the situation in Iraq—this from the Facebook event page: 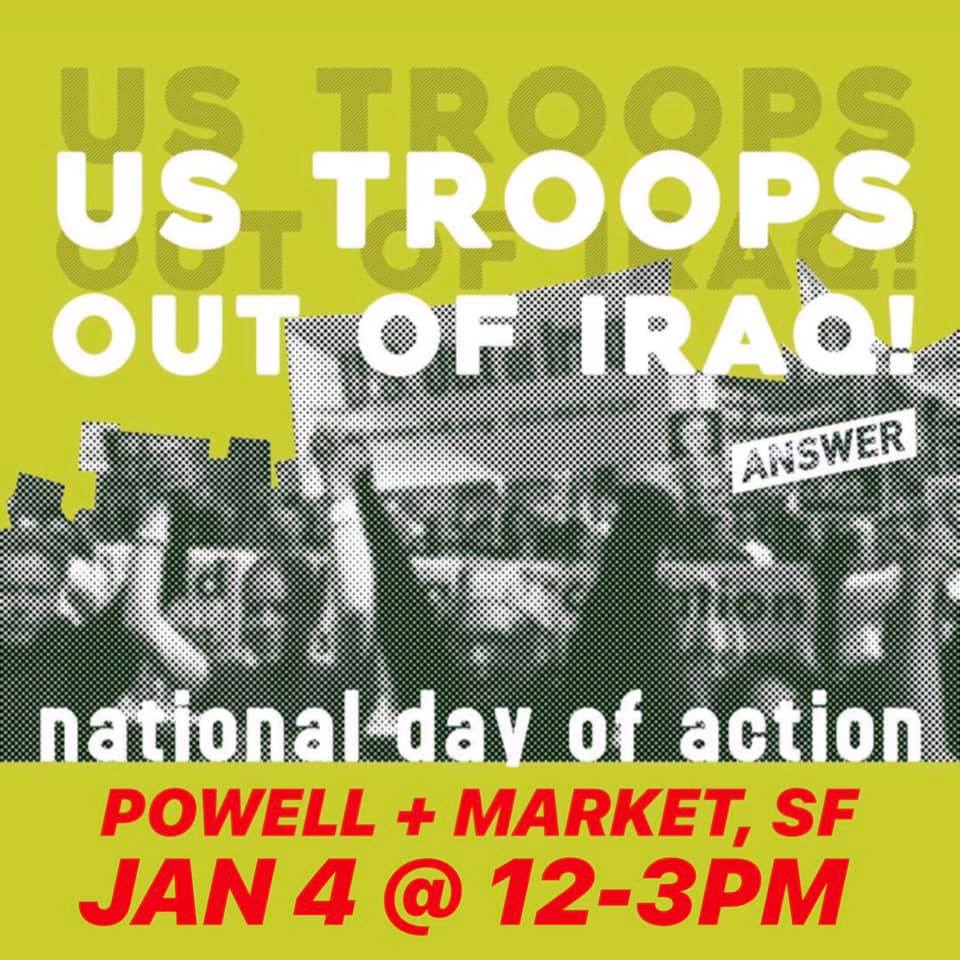 On Saturday, January 4 join us in San Francisco at Powell + Market as part of coordinated demonstrations across the country to demand: NO MORE U.S. TROOPS TO IRAQ OR THE MIDDLE EAST! U.S. OUT OF IRAQ NOW! and NO WAR/NO SANCTIONS ON IRAN!

In response to the massive protests in Iraq following the latest U.S. aerial assault that killed scores of Iraqis, Donald Trump has ordered 750 more U.S. troops to the Middle East and potentially 3,000 more. This is in addition to the 5,200 U.S. troops already stationed in Iraq in order to push a hostile U.S. agenda against Iran. Every U.S. president over the last 28 years has ordered the bombing of Iraq. The decision by Donald Trump and the Pentagon to launch new air assaults against Iraqis in the past week ignited nationwide resistance by Iraqis who want to reclaim their full sovereignty and do not want Iraq to be used in a U.S. war on Iran.

More than a million Iraqis have died during the past 28 years as a consequence of U.S. occupation, bombings and sanctions. Tens of thousands of U.S. troops have either been killed or suffered life-changing wounds. The U.S. government has spent more than $3 trillion dollars in the on-going occupation and bombing of this oil-rich country. Instead of taking the United States out of this endless war, Trump is building up U.S. forces in the region and threatening a war with Iran.

Join us Sat, Jan 4 @ 12pm at Powell + Market in San Francisco to demand: NO MORE U.S. TROOPS TO IRAQ OR THE MIDDLE EAST! U.S. OUT OF IRAQ NOW! and NO WAR/NO SANCTIONS ON IRAN!