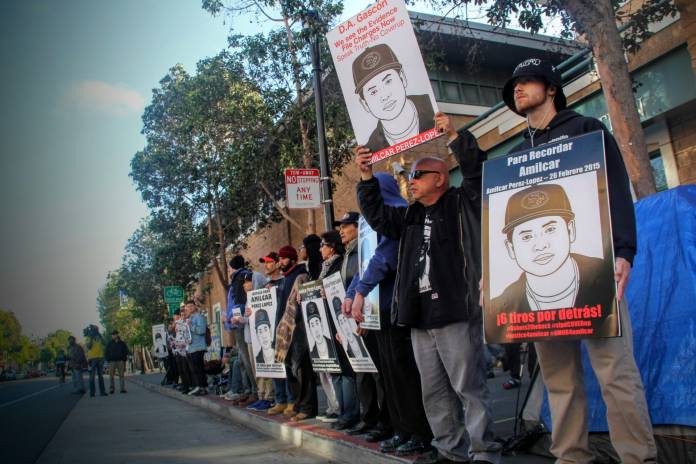 San Francisco District Attorney George Gascon is conducting an in-depth investigation of the shooting of Amilcar Perez Lopez and is expected to announce within the next week or two if he is going to file charges against the officers involved, we are told.

Father Richard Smith, an Episcopal priest and vicar at St. John the Evangelist Church in the Mission, told a group of reporters last week that he had been in touch with Gascon and the DA’s investigators and they told him they are close to a decision on the case.

If the DA actually filed charges against the cops who shot Amilcar, it would be a dramatic and highly unusual statement: District attorneys almost never charge police officers in shootings.

That’s in part because DAs have to work closely with police departments, and don’t want to screw up those relationships –but it’s also because, unless there is clear video evidence, it’s hard to convince a jury that police officers lie.

And yet, in this case, there are at least two credible witnesses who have told DA investigators, and attorneys in a civil case against the city, that Amilcar never attacked the officers, never charged at them, and was shot in the back while running away.

Smith, who has been active in the Justice for Amilcar Lopez case, told me that “their interviews of the two eyewitnesses opened up further avenues of investigation, and they went on to interview 40 neighbors in that area. Those latter interviews also seemed to go well.”

I called Gascon’s press office today, and got no response.

“We have let [Gascon] know that we are watching, if he decides to go forward, we will thank him from the bottom of our hearts,” Smith said. And if the DA decides not to bring charges, there will be a lot of community unrest.

If, on the other hand, Gascon actually charges police officers not just with misconduct but with criminal action, it would send a resounding message through the city and the department and would be a sign that there’s at least some chance that officers can’t keep killing people with impunity.

This is one of a series of cases involving SF police shooting and killing young men of color, and unlike the Mario Woods case, there is no clear video of the incident. But there are photos that seem to contradict the police version of events: One shot by a neighbor shows Amilcar on the ground in the street, suggesting he wasn’t charging the cops on the sidewalk.

You can read our detailed coverage of the case here. And you can read an extensive story by the UK Guardian, which also includes exclusive witness interviews, here.

The police account of the shooting goes like this: Perez Lopez was trying to steal a bicycle from another man, and was armed with a knife. Two officers, who were not in uniform, responded to a 911 call, and when Amilcar charged them with the knife, they shot him, in self-defense.

That, an autopsy shows, is not only lacking in credibility, it’s pretty much impossible: Perez Lopez was shot in the back, and the back of the head. He couldn’t have been charging at the officers.

And a critical element of the case, particularly in today’s climate of a rash of police shootings in SF, is the claim that the two officers who fired the rounds, Craig Tiffe and Eric Reboli, have a history of alleged brutality. According to the complaint, which you can read here, the two officers were sued in 2009 by a man named David Magana, who claimed that Tiffe and Reboli beat him repeatedly in the head with a baton. The case was later dismissed.

The police brass, the suit argues, were aware of the records of the two officers.

The witnesses say that one of the officers grabbed Amilcar from behind. The Spanish-speaking man likely wasn’t aware that the person, who was not wearing a police uniform, was a cop, and so got away and started running.

Amilcar Perez Lopez was walking to his apartment when he was confronted by a man, who began following and taunting him. An altercation ensued between the man and Amilcar. The altercation subsided and Amilcar began walking northbound on the east sidewalk of Folsom St. As he walked home, officer Tiffe and Officer Riboli surreptitiously rushed at Amilcar from behind. One of the officers … secured a bear hug around Amilcar’s petite upper body. … Amilcar was not able to determine that the men were police officers. Amilcar broke free by wriggling out from the officers hold. Amilcar fled toward the street between two vehicles.

As he fled from them, Officers Tiffe and Riboli pointed their firearms … one of the officers fired fired five bullets into Amilcar’s back and the other fired one bullet into the back of Amilcar’s head.

From a witness who spoke with the Guardian:

“He didn’t realize they were police. When they tried to grab him, he got away. They told him to drop the weapon. He dropped the weapon on the sidewalk. After that, they shot at him.”

Two people present at the time of the audio recording have verified its authenticity to the Guardian. The eyewitness is now in counselling, multiple neighbours and community advocates said.

There are, as far as I can tell, zero eyewitnesses other than police officers who back up what the cops and Chief Suhr are saying. And we all know the drill with police officers and shootings: If the officers shot someone and didn’t follow the rules, they risk their lives and careers (and possibly their freedom). No cop in that situation tells the truth.

We have a photo of Amilcar’s body in the street (supporting the idea that he was running away). We have witnesses who have spoken to the DA and, according to the Guardian and what we’ve been told, have said the police story is fiction.

How much more evidence does the DA need? Everyone is standing by. Because if these officers broke the law, so did the cops in the Woods case, and maybe many others.