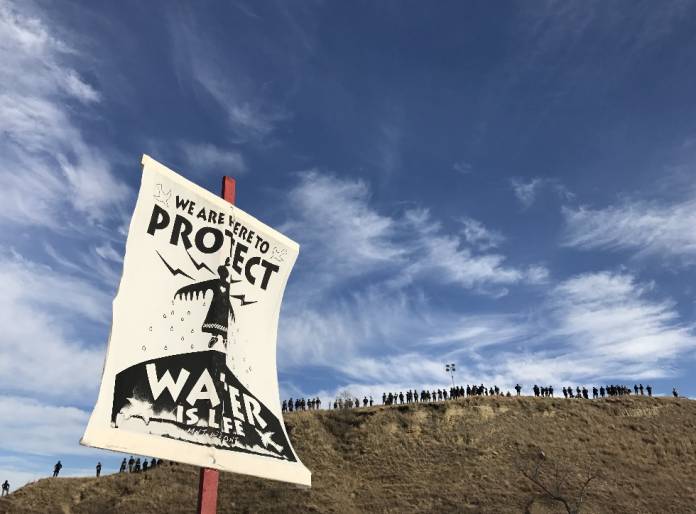 From 2002-2007, I was a primary care physician for US veterans in my training at UCSF. I was able to meet many young men returning from war who were clearly damaged by the things that they had experienced, and our conversations affected my own development as a social thinker.

What struck me was watching these young men wake up to the fact that their service was service for oil, for corporate interest and that they were trained to kill, to damage, and to stand in harm’s way for oil and corporate interest.

These oil wars have come home–in North Dakota and Iowa right now–where ordinary people are pushing back against the fossil fuel industry and the state violence that is used to push that industry down our throats. If we want democracy, we must have the courage to demand it. It will not be given to us. It does not exist right now.

The woke veterans know this.

I abhor violence and I hold myself to Gandhi’s principles of direct nonviolent civil disobedience to advance the case for justice. And I recognize what is happening in North Dakota is war–with one side being overly stocked with weaponry and using it and the other side being totally unarmed and powerful with prayer, righteousness and ancestry as well as the vision for the future we need, where we honor water instead of polluting it.

I can imagine for these veterans who are traveling to Standing Rock to be there when the Army Corps of Engineers attempts to evict 15,000 people from the camp that taking this stand for democracy, for the freedom of people’s right to say NO to corporate domination, I can imagine that this is a massive healing moment for this group of people, especially those who woke up around oil wars and see the connection between what is happening in Iraq, in Afghanistan, in Syria with what is happening in North Dakota.

I am heading out there on December 3rd to stand with the people and to assist medically.

I am reading the Bhagavad Gita, the Hindu text my father read every day of his life, which details a historic war and the dialogue around the necessity to rise to fight, because it is our duty. I am a nonviolent warrior. I come from a very long line of warriors. My ancestry traces directly from the Hindu figure, Krishna. I feel my own awakening in this work, on such a deep level, such an ownership of my own ancestral ties beyond patriarchal violence, deep into the heart of South Asia.

I am honored to use all of my faculties to stand with the Lakota Dakota people who are opposing the pipeline going through their source of drinking water. I am honored to work to stand against 500 years of environmental racism. I am honored to be a healer-warrior. This is what I came here for.