PARTY RADAR Festival season is coming hard upon us, even if that means May—pre-sale tickets are already available for the magickal, mystickal, musick-loaded, 19th annual How Weird Street Faire, happening May 6 (and yes, it’s no longer free: $20 at the door, $15 presale to keep it all going). And if you are queer and woodsy you will definitely want to dance for a full, wiggy weekend at the Gays Hate Techno Spring Gathering, May 3-6.

Welp, as if that weekend weren’t packed enough, along comes a local installment of one of the best and most adventurous “big name” electronic music festivals, MUTEK. The 18-year-old Montreal phenomenon usually serves, for techno jet-setters, as a perfect experimental and ambient comedown from the massive Detroit Movement Festival every May/June. Now the brand is expanding to the West Coast with recently announced MUTEK San Francisco, May 3-6. (Mutek has already expanded to Mexico City, still crying I couldn’t be there, and Japan.)

Now, you know me, I would usually go off about franchises coming in to take over the local scene, especially with such direct competition. But MUTEK.SF has gone out of its way to ground its programming in local players—in the first wave lineup announcement, I count almost a dozen, mixed in with international favorites like Derrick May, Tim Hecker, and Telefon Tel Aviv. So far a little light on women and queer folk; let’s see what’s coming. Early Bird Passport tickets are on sale now. 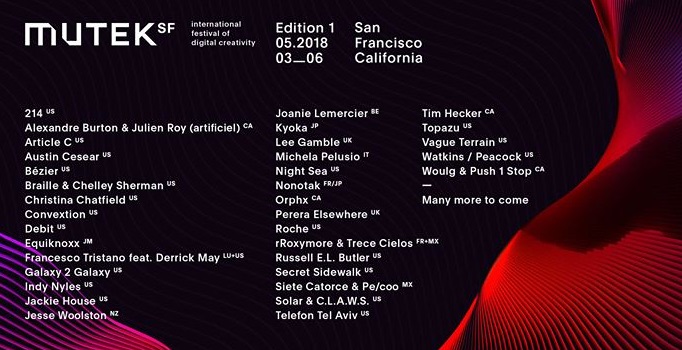 About electronic music festivals: We already have the great San Francisco Electronic Music Festival, usually in September, which is as experimental and full of the unexpected as Mutek was in its thrilling infancy. Last year, the As You Like It crew put on the Unabridged festival, which spanned both sides of the bay. RIP to the great Love Parade, which started out as a franchise here in, oh, 2004? And then went through a few LoveFest iterations with diminishing returns before petering out in 2009. Oh hey, and anyone remember the Summer Music Conference?

But mostly our dance festivals have been street fairs like How Weird (which has single-handedly kept our classic drum ‘n bass, funky techno, and Lower Haight rare groove scenes in mind) and Folsom Street Fair, which for a golden moment was a powerhouse of live acts and DJs, although it seems to have backed off of that with new management. And then of course there’s Burning Man, which long ago became a music festival.

MUTEK.SF will fill the current night-time gap of “danceable and interesting” agglomerations, bringing together names and NAMES, for a weekend that already looks pretty major.

THU/8 PUFF It’s a marijuana drag party for queers and others who work and love the cannabis field – plus a raffle with amazing prizes. Tons of performers! 7pm-9pm, $5-$10. The Stud, SF. More info here.

FRI/9 DEEPBASS Deep (duh), hypnotic techno that will tickle the tympanum of anyone into classic Berlin sounds from this Barcelonan. 9pm-4am, $12-$15. F8, SF. More info here.

FRI/9 KASSEM MOSSE & TIN MAN The As You Like It and Parameter parties join forces to bring in two of my faves:German Kassem Mosse makes deep-thinking, deep-moving techno, while the Finnish Tin Man kills it in the acid zone. Both are doing live sets woo-weeee. 9:30pm-4am, $15-$20. Public Works, SF. More info here.

SAT/10 MARCH TO REMEMBER AND RECLAIM QUEER SPACES We just lost the Gangway (although there’s a plan to bring it back!) Join drag goddess Juanita More, Mark Leno, and the GLBT Historical Society on this walkabout through formerly super-queer Polk Gulch, “laying black wreaths at the sites of former queer spaces in the historic LGBT district.” 4pm-6pm, meet at the site of the Gangway, SF. More info here.

SAT/10 A GUY CALLED GERALD The early British techno master who created the times “Voodoo Ray” and Black Secret Technology gets his acid house on at the Midway all night. Yazzzzzzid! 10pm-3:30am, $17. The Midway, SF. More info here.

SAT/10 NON STOP BHANGRA One of our best and most diverse monthly parties brings in bhangra biggie Jassi Sidhu from the UK to dazzle. All the whirling colors! 9pm-2am, $20. Public Works, SF. More info here.

SAT/10 STUDIO 5’4″ This is a hot dance party for short gay guys and the people who adore them. With DJ Suppositori Spelling. 10pm-2am, $5. Lone Star Saloon, SF. More info here.

SAT/10 DANNY TENAGLIA Househeads everywhere explode! One of the giants of the progressive scene, doing this for like 40 years now, comes in from NYC. 10pm-4am, $15-$25. Halcyon, SF. More info here.

SAT/10 PURIM CARNALVAL 5778 It’s the Jewish festival of Purim, so of course the Stud is throwing a live queer klezmer bash, with Ghost Note Ensemble and a bunch of witches. 10pm-4am, $10-$20 (NOTAFLOF), The Stud, SF. More info here.

SUN/11 DRAG SIDE OF THE MOON I am so down for this: “4 Queens take acid and trip through a psychedelic classic played front-to-back! Watch these queens perform to Pink Floyd’s Dark Side Of The Moon in its entirety, as they embark on a surreal journey through the depths of the human mind.” Gaymazing. 7pm-9pm, $10. The Stud, SF.

The pandemic is far from over -- particularly for workers in vulnerable occupations.
The Agenda

Legislation by Sup. Rafael Mandelman aims to get people off the streets -- but homeless advocates are not supporting it. That's The Agenda for April 18-25
Culture

X-Men to X-acto: The otherworldly analog collages of Michael Tunk

Screen Grabs: Films for a fragile planet, from Puerto Rico to Mars

The Jacksons' mid-career landmark, Anz's morphing UK bass, Kumail's pastel boogie, more to get you on your feet
Read more