The mayor’s race got even tighter with today’s results, and now Mark Leno is only ahead by 114 votes in the ranked-choice tally.

The vast majority of Kim’s second-place votes are still going to Leno.

From the Department of Elections:

The Department continues to review approximately 64,900 ballots for processing.  This total includes approximately 51,000 vote-by-mail ballots and an estimated 14,000 provisional ballots.

Overall, so far, the late VBM ballots have broken somewhere between the early VBMs – which had Breed in the lead – and the Election Day vote, which left Leno ahead by more than 1,200 votes.

I got some interesting data from Corey Cook, former USF political science professor who now runs a program in Boise. He’s been following the race from there, and sent me the following (based on yesterday’s numbers, but you get the point):

While the Chron continues to attack RCV and say that Leno could be elected with only 25 percent of the vote, look at the actual ballots and you see a very different pattern.

Leno is actually on top in terms of the number of people who listed him as one of their three choices – he’s got 65 percent. Breed is on 62 percent of the ballots, and Kim on 57 percent.

You can also see that far more Kim voters put Leno Number Two than Leno voters did for Kim. Which means that if the numbers change and Kim winds up in second place, Breed will win easily.

Here’s a map from Jim Stearns that shows where the remaining VBM votes are. The darker areas are places where there are more VBM votes. You will note that a lot of them are in the center of the city, which tends to be more progressive. 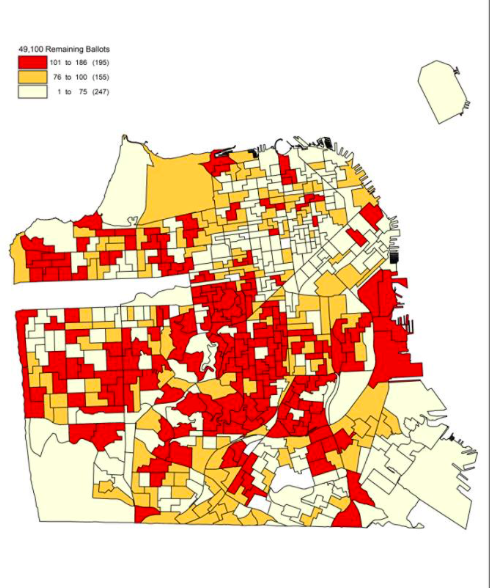 If anyone can read these numbers and predict who the next mayor will be, you are smarter than me.