Mark Leno’s lead dropped to 255 votes with the latest count, but a closer analysis of the numbers suggests that the ballots that were counted today were largely from the more conservative areas in town.

But on the Ranked-Choice-Voting tally, Leno was still ahead, narrowly, as the second-place Kim votes continued to break overwhelmingly for Leno.

The Examiner reports that all of these were vote-by-mail ballots, 3,000 of them ballots that the Post Office delivered on Election Day and the rest ballots that were dropped off at polling places.

Gabriel Markoff, who is active in the local chapter of Democratic Socialists of America, went a bit farther. From his Facebook post:

I compared the detailed neighborhood reports for today’s drop of about 8,000 new votes in the mayor’s race, which narrowed Leno’s lead to 255. It gives a good picture of why they skewed so conservative.

Aside from reportedly being all vote-by-mail and thus generally more conservative, of the ~8,000 counted in the mayor’s race, about 1,000 were from West of Twin peaks, 1,000 from Sunset (excluding Inner Sunset), 1,200 from Excelsior, 600 from Ingleside, and 600 from Marina/Pac Heights. By comparison, there were only 1,630 new votes from Chinatown, the Castro, Haight-Ashbury, Inner Sunset, the Mission, Noe Valley, North Bernal, South Bernal, and the Richmond COMBINED.

This was a weird, disproportionately conservative batch, and we’re almost done with VBM. There’s only a couple thousand VBM left, and then about 47k drop-off ballots and 14k provisional ballots left.

The early VBM was very favorable to Breed, and when those votes were counted she was well ahead. When the Election Day results came in, Kim picked up more votes than Leno, but not enough to pass him for second-place. And most of her Number Two’s went to Leno.

Ballots that are dropped off on Election Day typically break similar to the Election Day vote, but not always.

Here’s a map provided by progressive consultant Jim Stearns that shows where Leno and Kim did well: 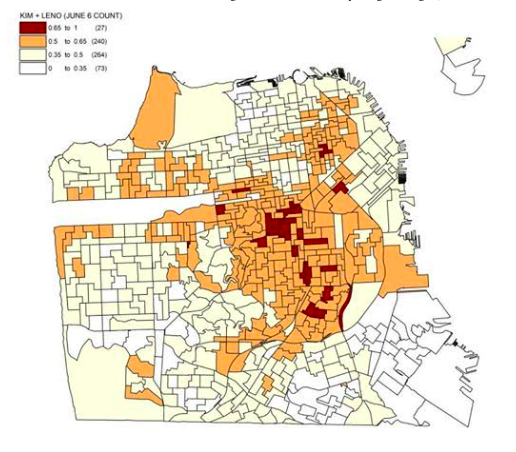 Only 25 percent of the votes counted today came from the orange and red areas. Stearns:

The DOE data also shows that remaining ballots skew much younger in age (55% under the age of 50, vs 34% under age 50 for ballots already counted).

The provisionals are another story. A fair number of those will be people who went to City Hall and registered to vote on Election Day – the place was packed. I suspect that those are mostly Breed and Kim votes; most of Leno’s supporters were likely registered already. How many Breed and how many Kim? Nobody knows.

Nor do we know how many outstanding ballots come from which neighborhoods.

So: It’s still all up in the air. The Department of Elections says there are 84,000 more votes to count.

Meanwhile, the Chron continues its attack on RCV with an editorial that says the race “puts ranked-choice voting in harsh spotlight.”

As San Franciscans are discovering, the system sometimes called “instant runoff” is an oxymoron … The ranked-choice system means the next mayor of San Francisco could be the first choice of as few as 1 in 4 voters.

Let’s take a step back here.

The reason that we don’t have “instant” results has nothing to do with RCV. The prevalence of vote-by-mail means that most of the ballots are not cast on Election Day in a precinct with a voting machine, which can immediately tabulate the results and the DOE can post them as soon as they are downloaded from a memory card.

Most people now fill out a ballot at home, and either mail it in or deliver it to a polling place on Election Day. Every one of those has to be checked to be sure the signature on the ballot matches the one on file and then every one has to be fed into a voting machine at City Hall. That takes a lot of time.

So it’s VBM that delays the results; RCV has nothing to do with it. The DOE can run that computer program in a matter of minutes.

And the idea that a mayor could be elected with fewer than half the voters picking them as their first choice? That has nothing to do with RCV, either.

Years ago, the system would have worked like this: If no candidate on Election Day wound up with 50 percent plus one, the top two candidates would have faced each other in another election, a direct run-off, three weeks later.

In the old days, the people who supported everyone other than Breed or Leno would have to decide: Since my first choice didn’t win, should I support one of the remaining candidates – or should I stay at home and not bother? In high-profile races – say, Newsom-Gonzalez – the turnout in the runoff was higher than in the general election. In others, it dropped off a bit.

Under the current system, you make that same decision – on Election Day. If the candidate I like the best doesn’t win, which of the others would I prefer?

That’s not, as the Chron has said in the past, “gaming the system.” That’s how the system is supposed to work.

We can argue – and we will, after this is all over – about whether runoffs for the Mayor’s Office are a better way to elect the city’s chief executive. But the idea that a candidate favored by a minority of the voters on the first round will eventually be mayor is nothing new at all. It’s very common.

It’s also true in other national and statewide races. When there are multiple candidates in, say, a Democratic or Republican primary, the first round often goes to someone who is the first choice of only 30 percent of so of the voters. Then in the general election, people decide which of the remaining candidates is better than the other.

And as long as we have nonpartisan local elections, when multiple candidates can run for office, the system the Chron decries will continue – whether it’s a runoff or RCV.