Travel back with me to a distant time when the economy had collapsed, the country was visibly divided, protesters took over the streets, a border wall was being built, immigrants were being scapegoated … Well OK, 2011 sounds a lot like 2020, even with a Black Democrat as president and LMFAO at the top of charts.

Back then a prescient, “liberal comedy” tour called “Laughter Against the Machine” was touring the country, delivering searing political quips onstage while its trio of supercomics—Nato Green, W. Kamau Bell, and Janine Brito—visited sites of persecution and upheaval, including the militarized Arizona border, the Ninth Ward of New Orleans, Occupy protests in Oakland, the Arab community in Dearborn, MI, and more.

“Laughter Against the Machine” was filmed along the way, and has now been released as a smartly edited, seven-episode series on Means TV, an online network funded purely by subscriptions that touts itself as “the world’s first worker-owned, post-capitalist streaming service, making entertainment for the 99%.”

But the show’s no mere nostalgia trip. The episodes of “Laughter” average a totally digestible 12-minutes, each a small window in time that often feels like a mirror.

“In San Francisco, we’re so far up our own butts in every possible way, I feel like we probably have something to learn about the rest of the country,” Green says in the first episode. That stereotype may be a little less true now that tens of thousands of former residents have been forced to move out into that world due to tech foolishness, but we still have several bubbles left to pop, and “Laughter” shows how much of what we’re experiencing today is rooted in the recent past.

It’s also very funny! The trio are splendid companions with lovely rapport (they went on to work together on Kamau’s groundbreaking “Totally Biased with W. Kamau Bell”) and still-scalding insights into the workings and not-workings of the country. Their field trips to political hotspots are rife with poignant interviews and overviews and their delivery onstage doesn’t disappoint.

I spoke with Green about the origins and journey of the show, and what it means to be releasing it now.

48 HILLS It must be a real trip to revisit something you did almost a decade ago, but that still remains so relevant. What are some of the things that stick with you from doing the show that you find still apply right now? I’m thinking especially of how you were traveling the country as the Occupy movement was fomenting, and also your visit to the Arizona border wall …

NATO GREEN The most profound lesson I learned from doing that tour is that you never know what’s going to happen next. The idea began in the wake of the shooting of Gabby Giffords in Arizona. The Tea Party had swept the mid-terms, and the hope around Obama had collapsed. We wanted to go out and inspire America but America inspired us. When we started, we couldn’t see that Occupy was right around the corner, about to bring inequality crashing into the public consciousness in an amazing way.

The original tour was split in two chunks. The first chunk was September 14-17, 2011. Then we were supposed to go out again in November. The 17th, we were in Madison. There’s a moment where the three of us are sitting on stage in Madison, joking around about how we had our sets for the rest of the tour. There would be no more news to talk about it.

What we didn’t know was that very day was the day that Occupy took Zuccotti Park. Suddenly we were rushing to catch up and had to change the entire plan for the tour. This is when I really learned why there can always be hope. Just because it’s not in the headlines doesn’t mean that people have given up. Humanity will always look for a way to burst through. It may be growing beneath the surface like a rhizome, but it’s still there.

A lot of what we found is still relevant, but also those people won. We met Carlos Garcia with the Puente Movement in Arizona, organizing against Sheriff Arpaio. Now, Arpaio was indicted, pardoned by Trump, voted out, and Carlos is on the City Council. We were in Madison for the kickoff of the recall campaign against Governor Scott Walker. That failed but he was later voted out. We’re still talking about the 1%. Who are still dicks.

48H What was the origin of the show? It seems so pioneering in terms of a comedy roadshow that also directly took on political themes, presaging shows by other famous comics … and which also works really well on the web.

NG “Laughter Against the Machine” started out as a live show, initially Kamau, Hari Kondabolu, and me. During the Bush years, there was a boom in liberal political comedy. When Obama was elected, it all went away. Not for me though. I was in the Chronicle the day after the election in 2008, sharpening my knives to go after Obama.

In 2009, we started doing “Laughter Against the Machine” around the Bay. We toured to other progressive bubbles—Santa Cruz, Portland, Seattle.

Then in 2011 the tour idea came together, and we raised over $20,000 on Kickstarter, with notable support from people like Margaret Cho and Marc Maron. We had no idea what we were doing. Like, we didn’t know not to check Twitter while we were filming. So it turned out we’d raised enough money to fund the tour and the filming but not the post-production, which is why it took so long to get done. 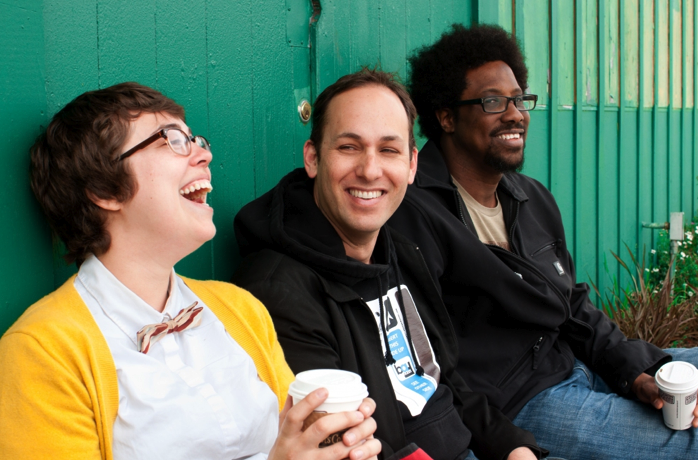 48H I pretty much died when Kamau said “‘Laughter Against the Machine’ is advertised as a liberal comedy show. But often liberals show up and they don’t actually want to hear comedy, they want us to say bad things about the right so they can clap.” And you follow up onstage with, “Liberals will fact-check you with Wikipedia while you’re on stage.” That totally nails the recent discourse in the comedy world about “clapter,” while jabbing comfortable liberals at a time when that wasn’t very common. How else would you say the show took on some of the sacred cows of the time? And how would someone watching today, especially a young Leftist or progressive, relate to that?

NG When we started “Laughter Against the Machine,” we had some guiding principles that shaped our approach—take risks, only talk ontage about things you genuinely care about, don’t hide your point of view.

There’s such a mode of wry detachment in comedy, but doing comedy is so fucking hard. If I’m going to bother to leave my family night after night, it had better be to talk about something I care about. The real thing is more compelling and funny than the fake thing. It was also critical to make fun of our own team. Anyone can make fun of the other side. But if they’re so dumb, why do we keep losing? Because we believed that we’re all screwed up by this corrupt society, it’s in all of us, we can’t be too strident. We’re implicated in our own jokes.

When we started doing the show, we played slides beforehand to set the mood. There was a slide of quote from Mort Sahl: “A political satirist’s job is to draw blood. I’m not so much interested in politics as I am in overthrowing the government.”

48H This is the first I’ve heard of Means TV, which is cooperatively run and directly benefits artists. How did you form a relationship with them? And in the absence of live comedy shows, how do you see programs like this as essential for working artists like yourself?

NG The people behind Means did some of AOC’s campaign videos, and turned that into a new media venture. The list of comedians who are actual card-carrying communists is pretty short, so we heard about each other right away and it was a no-brainer to work together. They got what I was trying to do and saw the potential in the raw footage I’d been lugging around for 8 years on 2011-era gigantic hard drives.

For me as a comedian, it’s clear that no one in Hollywood is sitting around thinking, “What we need is a middle-aged left-wing intellectual union organizer dad comedian from San Francisco raising twins one of whom is nonbinary with his anthropologist/nurse practitioner wife.” I realize that sounds like a sitcom pitch to you, but capitalist entertainment doesn’t see it that way. My audience is people into MeansTV, not people into Big Bang Theory or whatever.

When it comes to comedy, progressives love to be outraged by people they’re offended by but not support the kind of comedy they want. We generate an enormous amount of free content: podcasts, tweets, etc. Pay for comedy.

48H Are we going to see a “Laughter Against the Machine” reboot? (In masks, of course!)

NG We’re not likely to get the original band back together anytime soon, what with *waves hands* everything. But there are people doing heroic work now to save democracy and the planet and those people deserve a laugh. I’m always down to do a show for them.

You can watch episodes of ‘Laughter Against the Machine’ here.

How Haight Ashbury countercultural ideals were distorted by a tech "co-living" experiment, and a trans performance community was displaced.
Read more
Arts Forecast

Plus: Whiskies of the World, The Bad Plus, Public Works' 10-Year, "Bacchae Before," more upcoming events.
Read more