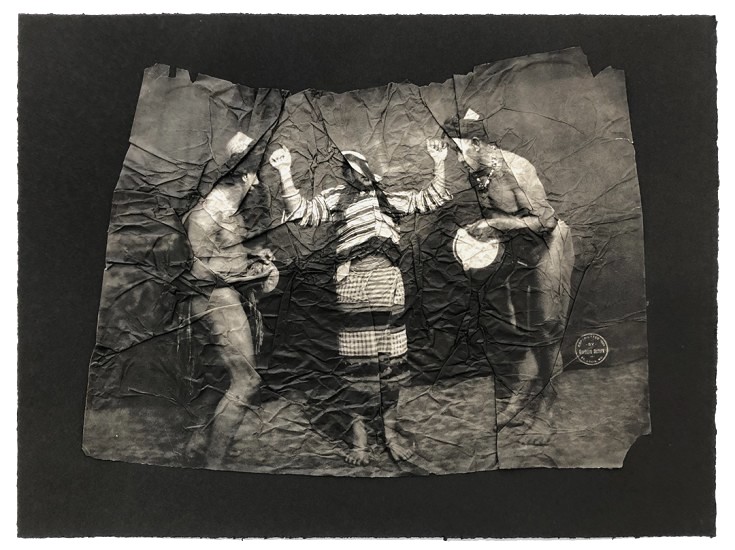 In Stephanie Syjuco’s “Native Resolution” at Catharine Clark (through April 10), the Oakland artist’s exhibition title refers to the amount of information in an original image, commonly referred to as the number of pixels. In imaging, native resolution determines the degree to which a picture can be enlarged or zoomed-in before the fuzziness and gridded pattern of pixelation becomes evident. Featuring images culled from Syjuco’s Smithsonian Artist Research Fellowship, the artist cunningly expands the idea of native resolution to include the anthropological gaze, wherein the Philippines and Filipinos constitute the “natives.” Sharply, Syjuco’s work probes how omissions and errors within the inherently fragmented archive impede our ability to enlarge, closely analyze, or make sense of our histories.

In Syjuco’s “Pileup” (2021) series she presents three major collages of documents and photographs. The color charts and rulers that pepper the collages remind viewers that while anthropology attempts to systematize scale and color, they remain relative terms embedded within systems built by institutions and businesses—like Kodak, whose Shirley cards demonstrate the exclusionary way in which the company did not calibrate its film for darker skin tones for many years. Moreover, Syjuco’s overlapping, clustered images conceal information, highlighting the ways in which documents and photographs are fragments to be interpreted and not objective facts in a fixed narrative. While anthropology exhibits photographs, documents, and specimens in the study of humanity, Syjuco renders the archive bare to reverse the power of display.

Anthropology as a science is dedicated to fastidious identification, cataloguing, and taxonomical orders. The catalogue entries in Syjuco’s collages reveal the archive’s colonialist narrative by individually naming the collectors, institutional owners, and archivists. In contrast to this naming specificity, the photographs featuring Filipino men, women, and children are largely anonymous, or as “Pileup (Eastman)” (2021) demonstrates, vaguely captioned as “Portrait of Man 1900,” on which someone has scrawled “Philippines?” on the edge. The omission and vagueness in naming the individuals photographed indicate the archive’s prioritization of the scholarship and ownership of Western collectors and archivists and how it has historically treated the “native” as an object of study, like any other specimen.

In 1904 Edward Curtis produced “The Vanishing Race,” a series of staged and deeply problematic photographs of Indigenous American; that same year St. Louis hosted the World’s Fair that featured the “Philippine Reservation.” In Syjuco’s video “Block Out the Sun” (2021) she sequences images from the World’s Fair in which Filipinos were brought to the United States and displayed in a mock-up village as a “human zoo.” Syjuco intervenes on America’s colonialist fascination with “the noble savage” by covering the individuals’ faces to shield them from the dehumanizing anthropological gaze. In contrast to the anonymous, clinical white archivist gloves that appear in her collages, in her video, Syjuco’s bare hands mark the tangibility and specificity of her as part of the Filipino diaspora.

In this richly layered exhibition, Syjuco’s sly use of native resolution could also extend to interpolation, a mathematical model used to calculate the data between pixels when enlarging an image. “Native Resolution” is perhaps a call for BIPOC individuals to make a resolute commitment to interpolate our fragmented histories, creating new data points within the silent spaces that claim, and respectfully rewrite, the histories of the people and places that preceded us.

Genevieve Quick
Genevieve Quick is an interdisciplinary artist and arts writer. Her writing has appeared in Artforum, cmagazine, and Art Practical.

In ‘Do Not Fold, Spindle, or Mutilate,’ rule-breaking becomes the rule