ALL EARS “I’m on a very real and urgent level working on staying in SF as a musician, and creating as much action and work as possible toward that goal,” Marc Capelle — bandleader, pianist, and all around supercool dude — told me via email. No doubt about that: He’s the piano man and musical director for the essential monthly Porchlight reading series. He’s a staple of the indie scene, playing on the new Vetiver album out next week.

Capelle curates music for the Contemporary Jewish Museum‘s Thursday music series in the Yud room, and the SFO airport’s “You Are Hear” music series. And he also “gives as many music lessons to kids as possible.” 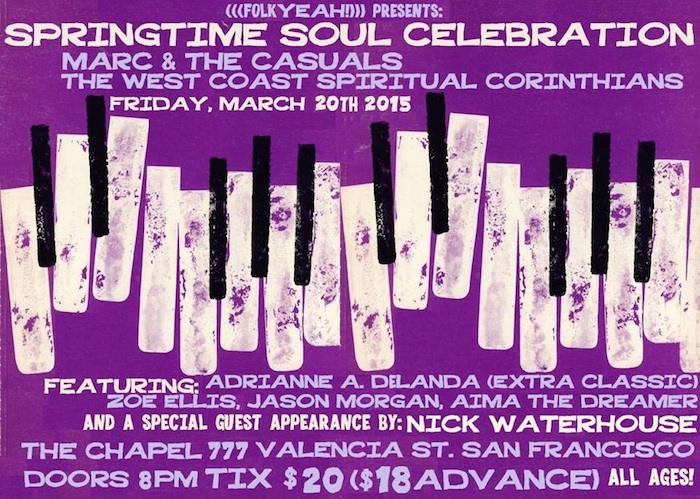 But his real musical light shines when he’s on stage with his swingin’ soul revue, Marc & The Casuals, driving the group’s big, old school sound with his funky keyboards. And, welp, spring’s about to be busting out all over, starting the night of Fri/20 at the Chapel, with Marc & the Casuals’ Springtime Soul Celebration.

“We have been doing quarterly shows at the Chapel for the last year and a half,” Capelle told me about the star studded show, which piles musical people onto the stage for a full-on soul rave-up. “All of them have been big revues and musical family reunions. Our hope in the shows is to be a live mixtape of great soul, pop, and dance music that brings together the crowd and the band.”

“That they had the first day of spring available when we were booking the year was an immediate ‘Yes.’ We’re always happy to throw a bash to celebrate making past the Ides of March.”

This time around, the festivities include some pretty great local names, including Nick Waterhouse, Aima the Dreamer, Adrianne A. Delanda, Zoe Ellis, and Jason Morgan.  But perhaps the most special treat will be classic gospel-soul act The West Coast Corinthians.

“Everyone involved in the Springtime Soul Celebration shares common bands and scenes in their past,” Capelle said. “The West Coast Corinthians, who are opening the show, have been together since 1957, and I have played with them since 1987.  The group is led by the 83-year-old founder Melvin Booker, who is a hero to all of us and a great teacher.

“That my 13-year-old son is in both bands on percussion makes a nice wide demographic of players,” he added.

“Melvin Booker’s approach to music is, if you can bring it musically to a show then you are in the show — now you just have to bring it.  With the Casuals, we take the same approach that is why it has grown from a four-piece group to the soul orchestra it has become.”

Sticking together to kick out the jams is certainly one sound strategy for musical survival in SF — as is joining in the celebration.

All Ears is Marke B.’s music column for 48 Hills.