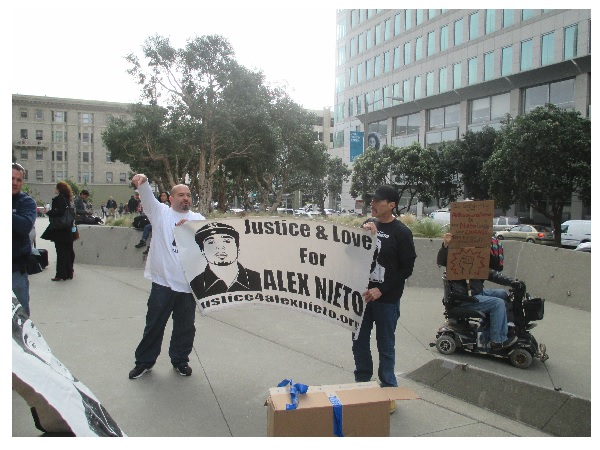 The officer who first opened fire on Alex Nieto testified today that he emptied an entire magazine, reloaded, and shot again, fearing that Nieto was shooting at him – although he saw no muzzle flashes, heard no bullets hitting the car he was crouched behind, saw no barrel smoke, and witnessed no recoil from the Taser Nieto was carrying.

Officer Richard Schiff, who was a rookie at the time, said he pulled the trigger on his .40 caliber handgun 13 times, ejected his empty magazine, put in a new one and fired ten more times, continuing to shoot because he thought Nieto remained a threat.

Under questioning from Adante Pointer, attorney for the Nieto family, Schiff acknowledged that he had been trained to re-assess a situation like this one constantly, and to stop firing if it was no longer justified. “Every time you pull the trigger, you have to justify the use of deadly force, correct?” Pointer asked. “Yes,” said Schiff.

The question is critical to the case: The plaintiffs in the case argue that the killing was unjustified, and the cops say that they were simply following the rules and their training in dealing with a man they thought was armed with a handgun.

The trial will continue into next week. Today we heard the testimony of two of the officers on the scene – Schiff and his training sergeant, Jason Sawyer, who has since been promoted to lieutenant.

On several occasions, the officers seemed to offer contradictory testimony — and the evidence we saw today raises some serious questions about the city’s official version of the case.

Schiff, who was still in his training period and had been out of the police academy less than three months, testified that he and Sawyer were responding to a call from dispatch saying that a Latino man in a red jacket had been seen in Bernal Heights Park with a gun on his hip.

That, both officers agreed, was unusual: It’s rare for anyone other than an off-duty law-enforcement officer to carry a gun in a hip holster.

The two tried to approach the park from the top of the hill, but were unable to get past a barrier. So they went around to the park entrance on the northeast side, drove up on a curb, and proceeded onto the paved path that curves around the hill.

Schiff did not put on the lights on top of his cruiser, he said, because he didn’t want to alert a potentially dangerous suspect of the police presence.

Instead, the car drove up the hill. A Latino man in a brown jacked passed by them, he said, and since he didn’t match the description they’d heard on the radio, they ignored him. That man, it appeared, wasn’t agitated, didn’t warn them that another man had a gun … just walked calmly by.

Then they saw Nieto, who was, the officer said, “purposefully” striding toward the car. It was never clear exactly what that term meant; Nieto wasn’t running at the car, wasn’t marching forward … he was walking. Maybe a bit faster than a casual stroller.

He was also, according to the testimony, eating chips or sunflower seeds out of a bag.

Nothing he had done – the “purposeful” walk, the chips – was illegal or in any way menacing, both cops admitted. In fact, they said, if it weren’t for the allegation that Nieto had a gun, nothing he had done would have merited a police response.

It gets a bit hazy at this point.

Schiff said that he and his sergeant got out of the car, standing behind open doors, and ordered Nieto to “show your hands.” But Pointer was able to elicit admissions from both that Nieto’s hands were already in plain view – he was holding a bag of chips or sunflower seeds and eating them. He was making no attempt to flee or hide anything.

Interestingly, the officers didn’t initially identify themselves as police, the testimony suggests; they shouted “show us your hands” but didn’t use the speaker in the car or turn on the lights. Nieto might not have known that he was under suspicion of anything.

The two officers said that Nieto refused to raise his hands high, instead said “you show my your hands” and then pulled out his Taser.

The two officers didn’t agree on how that happened; Schiff said that Nieto had reached down with both hands and assumed a shooting stance; Sawyer said that Nieto pulled up his jacket with his left hand and took the Taser out of the holster with his right.

Either way, both said that they immediately recognized the laser beam that the stun gun emitted and decided that it was an aiming device and that they were being targeted with a deadly weapon.

Schiff said he opened fire almost instantly, as soon as he could get his gun into position, and kept firing because – somehow, “inexplicably” as the city attorney argued yesterday – Nieto didn’t fall to the ground.

When he did drop, the officer said, he “jumped” to the ground in a prone position with the Taser still pointed at them.

This is one of the points that’s going to be critical to the case: Is it really possible that a man who had been hit repeatedly, at least 14 times, with .40-caliber slugs (designed for their “stopping power”) was able to keep a Taser aimed at the officers, intentionally dive to the pavement while still aiming the weapon, assume a prone firing position, and continue to be a threat requiring lethal force?

There is no video of this shooting. The only witnesses are the officers – who would not be on the stand if they had ever admitted even remotely doing anything wrong in this case, and who almost by definition have to argue that they perceived a deadly threat – and one man who saw it from the side of the hill, who has a very different story.

Schiff’s recollections of what happened are clearly not perfect or completely accurate, the testimony shows. The young officer said several times that he had made eye contact with Nieto, who was perhaps 90 feet away, and that Nieto’s forehead was wrinkled in an expression of hostility, agitation, or anger.

But as Pointer noted, Nieto was wearing sunglasses and a hat at the time of the shooting. The hat even wound up with bullet holes in it. “A hat covers the forehead, right?” he asked the officer. “That depends how you wear it,” Schiff replied.

The city attorney’s office, defending the officers, contends that the Taser was discharged at some point during the shooting incident. That’s going to be a big forensic issue, as the two sides discuss what the timing chip on that weapon actually shows and when it was fired.

But Schiff said he never saw anything – darts, confetti, or a muzzle flash – coming out of the Taser, which is really the point: It doesn’t matter if Nieto fired a weapon with an effective range of 15 feet – barely a quarter of the distance between him and the officers – if the cops didn’t see that or have any reason to believe that they were under attack with a firearm.

And if there believed Nieto had a gun, they both testified that during the shooting, they saw no additional evidence of that – the weapon in Nieto’s hands didn’t behave at all the way a firearm would have behaved.

Sawyer, who is a trained expert in firearms, agreed that there were no flashes or the sounds of gunshots coming from Nieto.

Rebecca Bers, a deputy city attorney, did the cross-examination of Schiff and focused on why the officer became a cop. His father’s also on the force. In discussing the incident with her, Schiff said that he and Sawyer discussed the possibility that the suspect with the gun might be a gang member because he was wearing red.

She took the officer through the same narrative, not adding much to the story except that he said he believed at every moment that his life and the life of his partner was in danger – almost entirely because he saw the laser beam and assumed it was attached to a firearm.

Pointer got a final word in, and it may be the heart of his case: As a young officer with a father on the force, “would you be ashamed if you killed a person without the justification for the use of lethal force?

“Does that not give you the motivation to concoct a story” that justified the shooting?

The testimony of Sawyer added some new elements to what happened that night. The sergeant, now lieutenant, testified that he was part of an elite group of officers who carried long rifles and was trained to be part of a special team that would set up a containment perimeter in the case of critical incidents.

But he didn’t use that rifle, which would have been effective from a much longer range than his handgun, in this situation, and didn’t attempt to set up a containment perimeter. It wasn’t, he said, a “critical incident.”

Sawyer said that he ordered Nieto to show his hands, and then said “drop it, police, drop it.” That’s the first time in the entire episode that anyone discussed identifying themselves as police officers.

“There is no other witness who heard those commands,” Pointer said. Bres objected to that statement, and the judge agreed that the jury shouldn’t consider it.

Sawyer also said that he continued firing at Nieto after the young man was on the ground.

Then came this exchange:

Q: Did Mr. Nieto have a firearm?

Q: Did you ever see darts come out of it?

Q: Did you ever see this gun shoot confetti [which happens when a Taser is discharged]?

Q: So you never saw this gun fire anything, and you were watching it the entire time?

Then Pointer bought up an entirely new issue: He asked Sawyer if there was any point in the incident when all of the firing stopped, a pause with no gunfire before the shooting began again. “I don’t remember that happening,” Sawyer said.

We have, however, been given evidence that there was indeed a pause, a moment when the shooting stopped and the officers could possibly have been deciding if Nieto was still a threat. I’ve reported on this; 48hills received what was described to us as an audiotape from a person living nearby whose home-security system recorded at least part of the incident.

The 58 shots that were fired aren’t all on the audio (unless a lot of them happened at once, and the low-res tape doesn’t capture it all). But there’s a distinct pause after the first couple of shots.

Which tells us, as the trial has so far, that the story the officers are telling—two years later – is not always consistent, and that the city’s official story seems to have at least some serious problems.