Puff: Ode to a bong

Nothing beats a classic glass puffer—but silicone bongs are on their way to help with breakage. 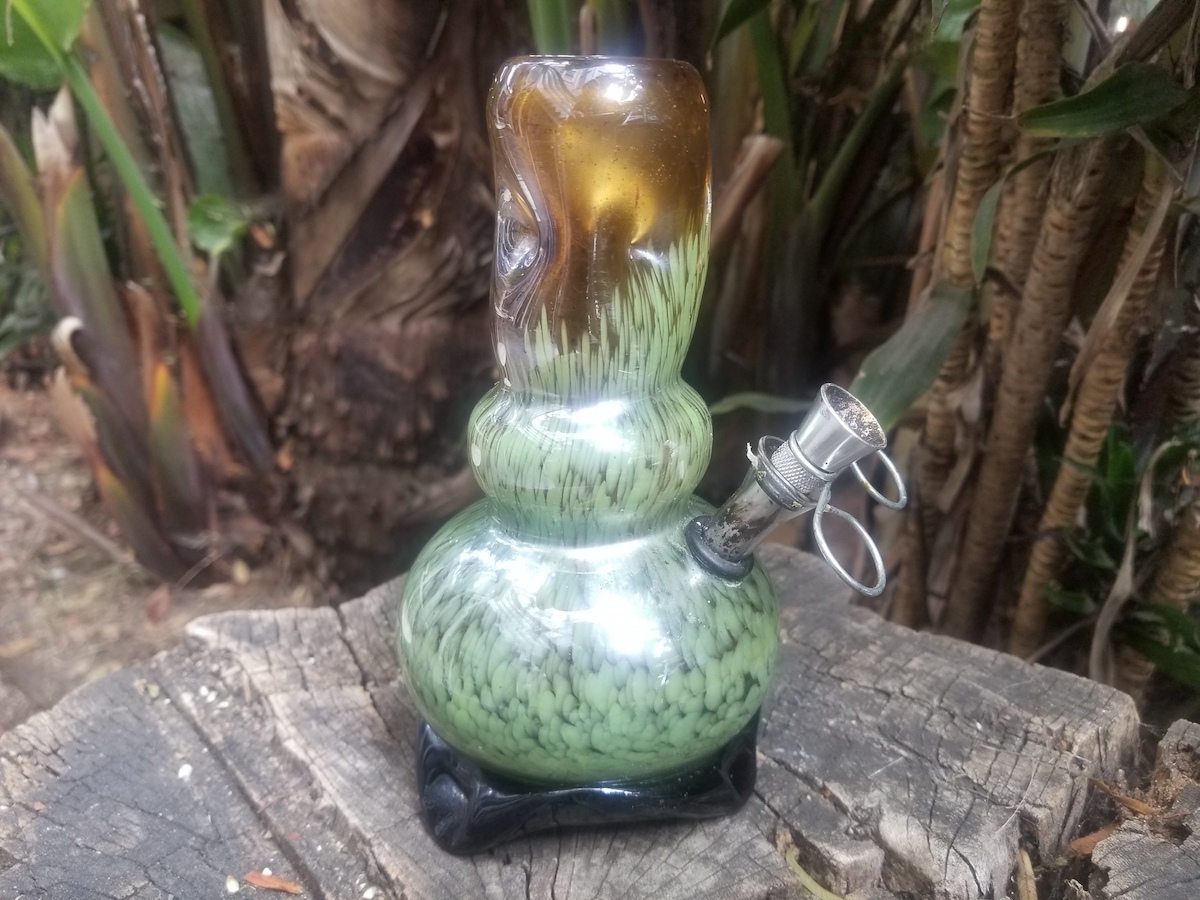 PUFF Recently a dear friend gifted me his glass bong. It is a beautiful green piece, heavy and sturdy. My first reaction was, “Don’t give that to me! I will break it!” His response, “Well if you do, you do, but enjoy it until then.”

The bong has always been my preferred method of smoking flower. As a beginning stoner, I surmised that you save the most smoke for your lungs with a bong. You can keep unused smoke trapped inside until you take the next hit.

You light a joint and it just starts burning with good smoke just floating away… lost for use. Of course this is also probably the most social way of smoking cannabis, handing it over, hand to hand, sharing. The preroll is nice especially if it is infused with hash or shatter. At that point, it doesn’t matter if smoke escapes because an infused preroll will probably fuck you up no matter how much smoke floats into the ether.

Like every good Bay Area resident, I have my pipe, which I dutifully stand with outside of bars, businesses and movie theaters and pack to pass around to friends. It works. Pipes are cute. They can get a little ashy and clogged up, and every once in awhile you get that bitter, acidic hit that chars the back of your throat.

In the end, give me a nice big bong. The water cools and filters the smoke as it enters your lungs. You can always add ice to the water for an even smoother hit.

It turns out the term bong is an adaption of a Thai word “baung,” a cylindrical, wooden tube cut from bamboo. It is a cousin of the hookah and is also known as a water pipe, billy, bing or moof. Bongs have been used in Laos, Thailand and all over Africa for centuries. ​One of the earliest recorded uses of the word in the West is in the McFarland Thai-English Dictionary, published in 1944, which describes one of the meanings of ​bong​ in the Thai language as, “a bamboo water pipe for smoking kancha, tree, hashish, or the hemp-plant.”

There are two kinds of bong etiquette. You have the solo smoker where each person is given a bowl of weed to smoke all on their own, and then you have the group pass and smoke, where everyone takes a hit off a giant bowl and passes it around the room. If this is the case, always clear your bowl. Do not pass a bong that still has your smoke left in it!

I have a preference for glass bongs. Other common choices are plastic and ceramic. Of course, my main problem is breakage. I am a major breaker of bongs! My favorite head shop in San Francisco is Jeet Big Times on Polk near California. Years ago, I told the owner, “If you give me a good deal on a glass bong, I promise you that when it breaks, I will return and buy another one from you.” After the fifth or sixth time this happened, the owner would chuckle and walk to the water pipe section of the store as I entered. I did not lie, it was a good deal for him in the end.

One way to combat this senseless breakage is silicone. I discovered the Roll-Uh-Bowl, a portable, folding, silicone bong that is unbreakable! It comes in many colors (including glow-in-the-dark!) and a couple of sizes. You can even adapt it as a dab rig. It runs from $35 to $60, and you can just stick it in your bag for travel, pull it out and smoke it anywhere, and then just rinse it out and tuck it away for the next time.

I did have a close call. I moved a giant CD tower out of my living room. Yes, I still have CDs. I had to go get something in the other room, and as I left I brushed against the tower. Well it decided to go all Towering Inferno on me and fell forward crashing into my side table sending CDs spilling across the room. A favorite pipe took a direct hit and was crushed. The new bong was hit as well! I inspected it. It wasn’t leaking or cracked, but I couldn’t get a hit off it. The inner glass stem had shattered. A quick $8 visit to Jeet who was obviously a little disappointed I didn’t buy a new bong, and bingo, the Birdie bong was like new again!

I think the lesson learned was a cheap glass bong will always easily break, but a nice heavy glass piece is worth the investment and will endure. In the end, of course, it will break someday too. So goes life. Just enjoy it until then.