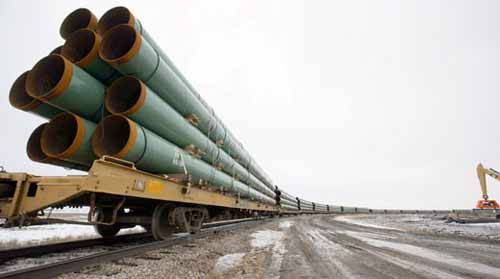 APRIL 22, 2014 — By delaying a final decision on the Keystone XL pipeline until Nebraska devises a legally valid route across the state, the Obama administration may have pushed the question off for months—most likely until after the November mid-term elections. That lets the president ride out the hotly contested campaign for control of Congress without having to decide whether the controversial pipeline is in the national interest.

But the most important effects of the postponement might not be about politics at all. Rather, the passage of time may well highlight two substantive issues for all to see that will factor significantly into the national interest determination: the pipeline’s significance for America’s oil supply and demand and for the world’s climate conundrum.

As rapid changes in the oil markets continue, and as developments occur in urgent international climate change negotiations, they could significantly influence President Barack Obama’s ultimate decision on the project. The Keystone would carry diluted bitumen, or dilbit, from the tar sands of Canada toward refineries on the Gulf Coast.

Already a lot has changed during the years of contentious debate since pipeline builder TransCanada first filed the application for the project in 2008. For one thing, the risks of spilling dilbit have become better understood. Congress also has proven itself unwilling to enact major climate legislation, making presidential decisions on major energy infrastructure projects all the more important in addressing climate change. And a growing public protest has made rubber-stamping projects like this one a thing of the past. Meanwhile, the pipeline’s southern leg has already been built and is in service.

Even before the latest delay in the five-year-old Keystone review was announced on Friday, TransCanada was unlikely to have been able to start construction on the northern part of the line this summer, or to finish it next year, as the company once hoped. Its path through Nebraska was nullified earlier this year when a state judge in Nebraska ruled that the route’s approval was based on an unconstitutional 2012 state law. With no legal route through Nebraska, the whole pipeline was put in limbo, and the State Department said it had no choice but to suspend Washington’s final inter-agency review until Nebraska could clear matters up.

It will take TransCanada two summers to complete construction, so it seems that the earliest the pipeline can enter service will be late 2016. It might even be later, if Nebraska’s solution to the current impasse means a new route has to be restudied.

And in the months and years ahead, more changes are likely to arise.

The oil markets and climate negotiations are two examples:

Oil markets. Production of oil within the United States is very likely to continue surging. With every passing month, the need for Canadian oil supplies to the United States becomes less urgent. Certainly, the refineries on the Gulf Coast would like to have more plentiful and inexpensive supplies of tar sands oil, a particularly dirty fuel for which they are ideally configured; they would use it to make diesel fuel for export to Latin America and other overseas markets. But in the few months since TransCanada opened up the new southern leg of the Keystone system from Oklahoma to Texas, inventories of oil in the Gulf region have exploded. And domestic supplies of lighter, lower-carbon crude oil from the Bakken and Eagle Ford deposits are also flooding onto the market. The increase in U.S. oil output during 2013 and 2014 alone is significantly greater than the 830,000 barrels of oil that the Keystone system is expected to carry. And the amount of oil available to drillers is growing all the time: Newly released data shows domestic reserves grew another 15 percent in 2012, an upward trend that shows no sign of abating.

When Obama makes his decision, he will know that America has plenty of oil for the time being, with our without the Keystone, and with or without growing supplies of Canadian tar sands crude.

Climate change talks. If Obama reaches a decision point at the end of this year, by then the United States and the rest of the world’s nations will be just 12 months away from a pressing international deadline to reach agreement on a new United Nations climate treaty, with negotiations scheduled to culminate in Paris in December 2015. That treaty is meant to put the world on a path toward steep reductions in emissions of carbon dioxide over the decades between 2020 and 2050.

During the past year, a series of three reports from the International Panel on Climate Change (IPCC), which represents the consensus of the world’s climate scientists and economists, have made clear the urgency of the task. The first report declared with almost complete certainty that climate change is occurring, that man-made emissions are largely the cause of the warming so far and that further warming is already locked in. To keep it within safe bounds, it found, the world must stay within a fixed limit for further emissions of carbon dioxide, a carbon budget that must not be exceeded and that is already about half spent. The second report presented in exhaustive detail the evidence of the changes that are already being felt and the reasons for believing that much more devastating changes may lie ahead—notably a decline in agricultural productivity just as the world’s demand for food is increasing. The third report explained in detail that the costs of mitigating these risks and adapting to the changes that do occur will become ever more expensive if nations do not take significant actions quickly to rein in emissions.

This is the crucial year for moving these talks ahead. Nations are supposed to spell out as early as possible what pledges they are willing to make toward reducing emissions. A gathering of world leaders at the UN in the fall is supposed to keep the momentum going, and by December, a conference of negotiators in Lima has to set forth the outlines of an agreement that might be concluded twelve months later in Paris. The Keystone decision, which Obama has declared will depend heavily on its implications for climate change, will come just when attention on the global talks is peaking, and when the United States is trying to cement its role as a climate leader.

Secretary of State John Kerry, along with Obama, is the key figure in making the decision on the Keystone XL permit. He has declared that his top priority is dealing with climate change and reaching a strong new treaty in Paris next year. But at the same time, the State Department’s final environmental impact statement on the Keystone, issued in January, based its conclusion that the project would not significantly affect Canada’s tar sands production, which cause significant greenhouse gas emissions, on the premise that U.S. and global demand for oil would remain high with or without the Keystone line.

Kerry is going to have to decide whether to listen to this business-as-usual, pro-pipeline rationale, or to accept the advice of the IPCC to leave most fossil fuels in the ground. And once the fall elections have come and gone, whatever their outcome, the climate negotiations may begin to outweigh domestic politics on his balancing scale.

Politicians will never shy away from the Keystone debate, and the Senate may even try to force the project through despite the Nebraska problem. Environmentalists who oppose the project also will continue to keep the pressure on, especially on Earth Day and the week that follows, when they plan to hold major demonstrations in Washington. The latest delay does not mean an easing of the political tug of war. But in the months ahead, especially after the elections have come and gone, the contest could well be about to shift onto new terrain.

Share
Facebook
Twitter
WhatsApp
Linkedin
ReddIt
Email
Print
Previous articleCity Beat: Dissecting the mayor’s interview on KQED. Plus: Ammiano Clean Energy bill moves forward — and why does SF spend so much on homeless programs?
Next articlePolitics on Tuesday: The Warriors, The Mayor, and Airbnb