Holder has a compelling case in the Brown killing 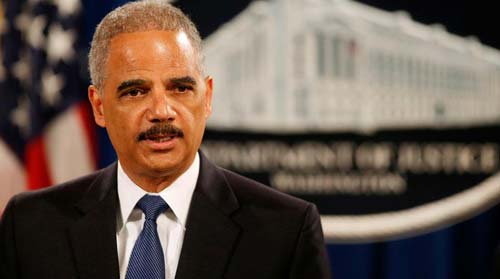 He’s certainly taken almost unprecedented lightning-fast first steps in that direction. He’s got a phalanx of FBI agents assigned to the case. He’s authorized an autopsy by a crack medical examiner from the military. He personally travelled to the city to review procedures with Civil Rights Division attorneys and investigators. None of this would have been done without the personal approval of President Obama, who already has made more statements on the Ferguson furor and the Brown killing than he has on any other racially charged flashpoint issue during his White House tenure.

There are several factors within federal law that Holder has to look at to make the final decision whether to go forward with a prosecution. There has to be a “compelling interest” that the defendant’s conduct could constitute a federal offense and that there is sufficient evidence against the defendant that the government can obtain a conviction.

There are clear elements of each of these hard federal prosecution requirements in the Brown killing.

The compelling interest is probably the easiest of the requisites to satisfy. Wilson did not charge Brown with a crime; the 18-year-old was stopped by all accounts for jaywalking. The allegations that Brown was a suspect in a convenience store heist, and that he smoked marijuana, and even that he may have actually had some physical altercation with Warren came way after the fact. Multiple eyewitnesses have been absolutely clear on this crucial point. He was shot on the ground with his hands up. An independent autopsy has confirmed that Brown could not have been shot during a scuffle as Wilson, police, and an anonymous eyewitness claim.

The key point is that he was on a public thoroughfare when he was killed. The right to freedom of movement without the danger of undue harm is a fundamental right that’s enshrined in constitutional law and public policy. It’s inviolate. The courts have repeatedly upheld a citizen’s right to freedom of access and movement in public places.

Though there was no apparent racial motive in Wilson confronting Brown, his action clearly violated Brown’s right to exercise his freedom of movement. This directly impacts on an individual’s right to life and liberty. This civil right was violated the moment Wilson presumed that a young black man walking in a public thoroughfare had committed a crime. The safeguard of that right must be a fundamental concern of federal prosecutors.

The Brown case also strongly points to systemic issues of excessive force by police. The obvious excessive force that was used was the slaying of Brown. This strikes to the heart of another basic right of citizens, namely the right to life and liberty, and again the freedom from undue harm. His killing once more raised deeply troubling questions about the power of the law to protect citizens from their unimpeded right to life and safety. Federal prosecutors play a major role in insuring that where there’s the suspicion that an individual’s rights might have been violated solely because of their race and gender that the power of federal law is brought to bear to insure that right is protected.

Wilson was a police officer and the charge that he abused his power in killing Brown under the color of law is the linchpin of federal prosecutions of local police officers. This was the rationale that federal prosecutors used in the Rodney King beating case to bring civil rights charges against the four LAPD officers that beat King. The crucial legal point was that they acted in an official capacity when they violated King’s rights.

The Justice Department scrupulously goes to great lengths to shield itself from the charge that it’s bowing to media or public pressure to prosecute. This is why the percentage of civil rights prosecutions it authorizes is infinitesimally low, especially against police officers. Yet in the Brown slaying there are crucial federal interests in insuring the rights of individuals to be free from undue harm because of their color, age, and being in a public area merely because someone perceives they shouldn’t be in and then acts on that perception with no cause other than that belief or perception.

Earl Ofari Hutchinson is an author and political analyst. He is a frequent MSNBC contributor. He is an associate editor of New America Media. He is a weekly co-host of the Al Sharpton Show on American Urban Radio Network. He is the host of the weekly Hutchinson Report on KTYM 1460 AM Radio Los Angeles and KPFK-Radio and the Pacifica Network. Follow Earl Ofari Hutchinson on Twitter: http://twitter.com/earlhutchinson