That ballot measure gathering signatures for “clean power” is actually an attack on CleanPowerSF, sponsored by PG&E allies JUNE 29, 2105 – There were people on the streets gathering signatures for two ballot measure this weekend – and some confusion. Apparently the same company that was hired to put the Mission Moratorium on the ballot is also working for PG&E’s union in its efforts to screw up CleanPowerSF.

So the person I ran into in the Mission asked me to sign both for “affordable housing” and “clean energy.”

One is true. The other is a scam.

The Mission Moratorium is sponsored by community leaders concerned about the lack of affordable housing and the massive displacement that’s happening in the community.

The “clean energy” measure is sponsored by the IBEW Local 1245 and signed by IBEW leader Hunter Stern.  It sounds fine – it says that the city would be required to disclose how much of its CleanPowerSF energy is from truly renewable sources.

But according the city attorney, the measure also:

would also prohibit the City from engaging in any form of advertising or marketing, or from making any public statement, that the electricity it is supplying or will supply in a CCA program is “clean,” “green,” or any similar term, unless the electricity is “renewable, greenhouse gas-free electricity” under the measure.

It’s impossible to start a clean energy public-power program with 100 percent greenhouse-gas free electricity. That’s why PG&E’s allies (and IBEW 1245 has always, always sided with the utility against public power) are doing this. It’s a clear attack on public power.

Remember: PG&E claims to be starting up a clean-power option, but at least 20 percent of the utility’s power comes from a nuclear plant at Diablo Canyon. Is that “greenhouse gas-free?” Some people might argue that. Is it “green?” Not by any standard.

It’s too bad that the measures are together – and that PG&E’s allies are using the term “clean power” to prevent the city from moving forward with clean power.

Just be warned: One ballot measure is a real grassroots effort. The other is a PG&E scam. 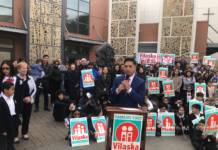 Review: A dash of variety and joy in SF Ballet’s ‘Classical (Re)Vision’