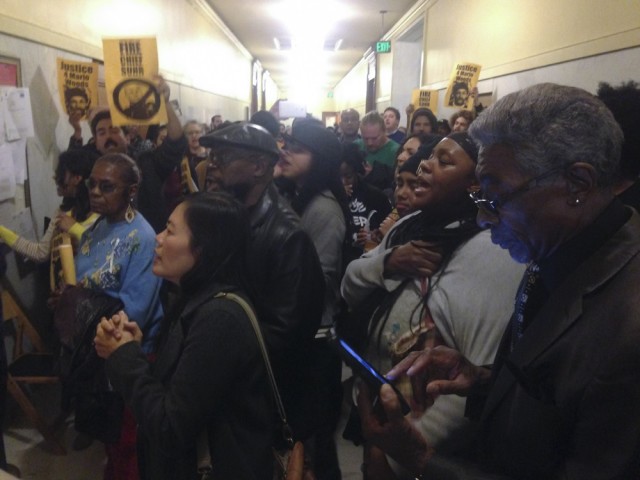 In a closed session this week the San Francisco Police Commission will be deliberating settlements in three legal cases filed against the Police Department.

Settlements are sent to Police Commission for sign off, and once the ordinance authorising the settlement is returned it’s sent to Board of Supervisors for approval.

One of the cases is startling.

A civil lawsuit filed in June 2015 alleged that an SFPD officer tried to tip a quadriplegic out of his wheelchair. The incident was caught on video. The plaintiff Devaughn Frierson claimed that officer — who is identified only by his last name, Carrasco — grabbed his wheelchair and tried to dump him face first into a concrete sidewalk.

The incident took place on Jan. 18 2015 near the corner of Sunnydale Avenue and Hahn Street. The lawsuit details that Frierson approached officers when he saw them physically restraining his cousin and began to inquire what they were doing — and in response, the officer grabbed his wheelchair and turned it around.

The suit says Frierson began complying with officers’ orders to back up but Carrasco “tried to dump plaintiff out of the wheelchair while saying words to the effect of ‘take your punk ass home,’” the complaint states. Frierson, it says, was dangling in mid-air and avoided hitting the pavement only because he had a seat belt on.

At one point, the complaint states, another officer forcefully grabbed Frierson around the neck “in a Vulcan death grip type hold.”

Officer Carrasco said that Frierson had run over his feet.

In a joint status report filed on 6th of April 2017, SFPD and Frierson’s representatives John Burris Law told the court that a settlement has been reached between the two parties. The settlement amount has not yet been disclosed.

A personal injury suit filed in state Superior Court alleges that plaintiffs were injured when hit by and SFPD car. The incident happened in April 2015; plaintiff Jason Douglas and Carol Grindley alleged that an SFPD car made a sudden 90-degree left turn and struck them.

Another lawsuit settlement to be discussed is regarding an incident that happened in September 2014. The lawsuit alleged that SFPD Officer Sam Yeun arrested plaintiff Raymond Choy, a 66-year old San Francisco resident, without probable cause. The lawsuit demanded that the city pay damages of up to $113,774 including hospital bills and attorney fees.

The Police Department has been under intense scrutiny and the actions taken by the new police chief are being watched closely by community members. Frierson’s case in particular caused a lot of uproar as video of the incident was released. Damages in the case haven’t yet been made public.

But the fact that it’s settling indicates that the city is going to be on the hook for a bunch of money. That comes out of the General Fund, not the SFPD budget. So all of us are paying for it.