When we discuss anti-rape activism in the year since the #MeToo hashtag went viral, it is crucial to acknowledge the decades of work by anti-violence activists, leaders, and organizations that brings us to this moment.

It was Tarana Burke who actually started the Me Too Movement more than ten years ago and its resurgence last year ignited this unprecedented attention to sexual violence. On a national scale, women of color have been outspoken leaders in anti-rape work, calling out racism that exists within the movement while also calling for an awareness of classism. Locally, community-based organizations like Community United Against Violence, San Francisco Women Against Rape, Asian Women’s Shelter, and W.O.M.A.N., Inc., have been providing such leadership through direct services to survivors of sexual violence since the 70s and 80s. 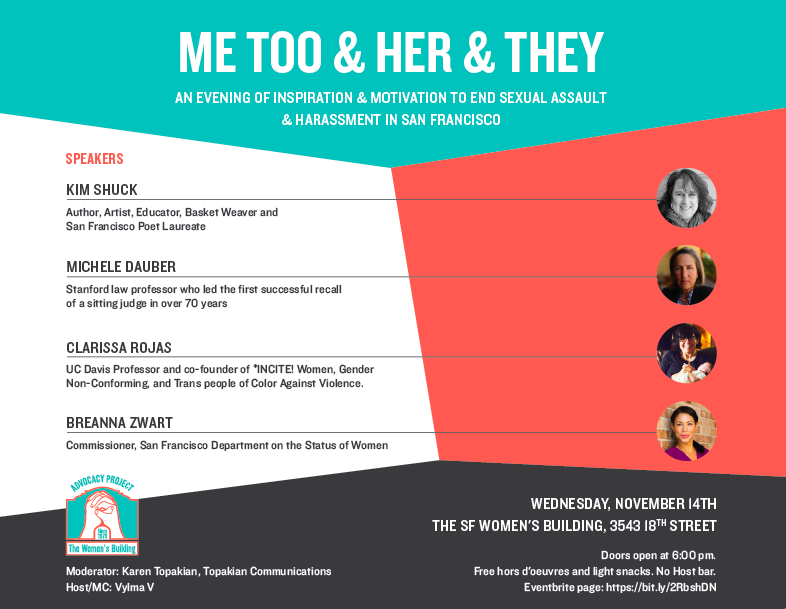 Radical anti-rape activism, led by women of color like Burke, is not new; however, people thinking, talking, and sharing stories about sexual violence on such a massive scale, is.

The reality remains: local leaders and organizations must build on this heightened public consciousness to create an impact in San Francisco that can outlive and outgrow the #MeToo hashtag. Addressing a crowd of 1,800 anti-rape leaders from across the country at the 2018 National Sexual Assault Conference, Burke emphasized that, “…while we have the spotlight, we have to run with it…we have a unique opportunity to advance our work in ways that many of us could not envision before last year.”

How do we do this? In the San Francisco Bay Area specifically, what changes can we make – or create the groundwork for – that are sustainable even when the conversation inevitably pivots away from sexual violence?

The Women’s Building, a staple of activism on behalf of women and girls located in the Mission, is working to do just that; to capitalize on this attention and concretize lasting advancements in the local anti-rape movement. In the spring of this year, The Women’s Building established an advocacy program called the Sexual Assault and Harassment Prevention Project led by Vylma Ortiz. With the feedback and input of the community, Ortiz highlights that The Women’s Building sought to be more intentional with their advocacy work, leading them to create a program that specifically addresses sexual assault. Ortiz explains that The Women’s Building, “…went around and did all these interviews. They talked to women about what they thought was a good area to go into and what kept coming up was violence against women…” In particular, Ortiz argues that there is not enough intentional, focused, and targeted advocacy to help women that are specifically victims of sexual assault, both locally and nationally, and this program seeks to address that gap.

The immediate priority of the Sexual Assault and Harassment Prevention Project is to support the current movement against sexual assault in San Francisco. Ortiz stresses that their goal is, “…to help coalesce, to help convene people, [and] to help to be a focal point to support survivors and movements.” In addition, she says she hopes that her program amplifies the voices of organizations who are providing direct services to survivors of sexual assault in the city, like San Francisco Women Against Rape (SFWAR). Ortiz illustrates that in this way, the Sexual Assault and Harassment Prevention Project can support rape crisis service organizations on a macro-level. This systems advocacy will be done in order to get service organizations more resources at the local and state level as well as to push their ideas for policy reform to the forefront.

Recently, in fact, San Francisco passed a law establishing the Office of Sexual Harassment and Assault Response and Prevention (SHARP).  While this Office will be charged with receiving and resolving survivors’ complaints regarding how city agencies responded to their assault, there is also a policy reform component. While noting that her program is in its early stages, Ortiz says, “we do want to support the establishment of the SHARP office and keep an eye on that it actually delivers what it is supposed to…It’s kind of like when Obama was elected President, you can’t just elect Obama then go home.” With the creation of SHARP, Ortiz’s budding advocacy program has a significant opportunity to affect local policy responses to sexual assault.

By continuing to promote awareness through a film series and hosting events, Ortiz aims to achieve their goal of convening the community around the issue of sexual violence. One such event coming up on November 14th, Me Too & Her & They, will highlight women activists working for social justice. This panel of activists will include Stanford Professor Michele Dauber, Commissioner on the Status of Women Vice-President Breanna Zwart, and UC Davis Professor Clarissa Rojas. Not only do these kinds of events raise consciousness surrounding sexual assault, but as Ortiz contends, “…it brings up feeling and emotion…It’s a way to get people to move from an awareness to taking action and we do that in community.”

Ortiz raises an important point here: we must effectively use the pain and anger that the #MeToo Movement has brought up and turn it into collective action.

While The Women’s Building is focusing more on a community-based approach to address sexual assault, one of the panelists for the November 14thevent, Professor Dauber, is using an electoral strategy. Dauber explains that her work is geared toward turning, “…the legitimate anger of women from the Me Too Movement and translat[ing] it into actionable electoral victory…” Dauber, the woman who led the charge on Judge Persky’s recall campaign, which saw a landslide victory this past June, argues that violence against women can be transformed into an issue for voters. Her organization, a collaboration between women’s rights organizations including Women’s March Sister Network and the Feminist Majority created a new Political Action Committee called the Enough is Enough Voter Project. Their goal is to share information with voters about specific candidates and elected officials who have a history of violence against women – whether that be accusations of sexual violence, misogynistic comments that show they do not take this issue seriously, or they have a voting record that indicates such.

Dauber explains that their plan is to target these candidates. She says,  “…we are going to publicize their record and we are going to do everything in our power to spend money against them and try to see that they are voted out of office.” With this strategy, she said she believes tangible progress can be made on the issue of violence against women. Ortiz says that the panelists for the Me Too & Her & They event, like Professor Dauber, have really pushed the needle forward on this issue which her program intends to do as well. “…The genie is out of the bottle,” Ortiz claims, “…in terms of what women are willing to tolerate in the work place, on campuses, [and] in the street…”

The “genie” is out of the bottle in a sense – this a moment where a once “invisible” epidemic is now taking shape in public discourse. This means that we need to etch change in stone so it cannot be undone when the moment has passed.

The work of generations of radical women, and especially women of color, has brought us here and it is our job to not only protect their legacy but to boldly and bravely move it forward.

If you want to support the Enough is Enough Voter Project, you can go to their website to find volunteer opportunities.