The Camp Fire has wiped out an entire town. It’s horrible: Paradise no longer exists. At least 48 people are dead; 8,800 homes have burned. The air quality in San Francisco is bad, and that’s impacted a lot of our lives, but our problems are nothing compared to the devastation to the north. 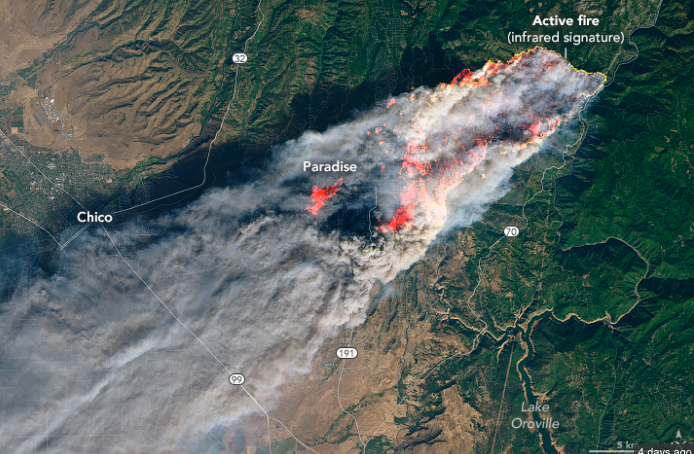 The Santa Rosa fires were an unimaginable disaster. But when it was all over, Santa Rosa still existed; there were schools and City Hall and water and sewer service and buses and the possibility of rebuilding … but there is no Paradise any more. Almost nothing left.

How did this happen? Well, there’s some pretty good evidence that PG&E was involved in the Camp Fire, which is the deadliest in the history of the state. Already, the private utility has been sued by some of the victims:

“Rather than spend the money it obtains from customers for infrastructure maintenance and safety, PG&E funnels this funding to boost its own corporate profits and compensation,” the suit says. “This pattern and practice of favoring profits over having a solid and well-maintained infrastructure that would be safe and dependable for years to come left PG&E vulnerable to an increased risk of a catastrophic event such as the Camp Fire.”

Today, the company’s stock is plummeting as Wall Street is looking at massive liabilities that might exceed the company’s ability to pay.

This is a company that blew up an entire neighborhood, helped spark fires that killed 44 and caused $9 billion in damages last year … and now, this.

Apologies, fines, and changes in management aren’t enough any more. PG&E as it currently exists needs to go.

Instead, given past practice, the company is going to ask the state to bail it out – either by sticking the ratepayers with the cost of corporate failures or by asking the taxpayers to pick up the tab.

But there’s another option.

When Washington decided to bail out Wall Street banks in the financial crisis of 2008, a few radical thinkers (including me) suggested that in exchange for $700 billion in taxpayer money, the government ought to move toward nationalizing the banks. Even the slightest move in that direction was difficult; there is little history in this country of public ownership of major financial institutions (except for the Bank of North Dakota.) There is no history of the government taking over a private bank and running it in the public interest.

The situation is very different when it comes to electricity.

Sixty percent of the electric utilities in this country are publicly run. There are more than 2,000 public-power agencies that provide energy to 49 million Americans. The vast majority operate without any serious problems. Fifty cities and districts in California have public power, including Los Angeles and Sacramento. In nearly every case, electricity provided by public-power agencies is cheaper than PG&E’s, and public power is leading the way in reducing greenhouse gas emissions.

In some cases, those agencies were formed when communities took over PG&E’s local infrastructure.

In San Francisco, the battle over public power has been going on for more than 100 years.

So it’s worth raising the question: If the state is going to once again have to bail out PG&E to keep the private company solvent and keep the lights on, why not just take it over entirely?

The state – that is, you and me – is already going to be paying for PG&E’s long history of diverting revenue away from public safety to fund executive bonuses. So why not get the company in return for a bailout?

Why not let PG&E stock collapse, the company head for bankruptcy – and then buy it for pennies on the dollar and turn it into a state public-power agency?

Selling electricity is lucrative; PG&E collected $406 million in just one quarter in 2017. Every public-power agency in California, and almost every one in the country, makes money (in Hayfork Valley, the public utility was able to save a county hospital that was going to close). If the state had to sell bonds to cover the price of buying out the carcass of PG&E, the revenue from operating the utility would quickly cover the costs.

And instead of turning that $1 billion or more a year in profit into corporate bonuses and stock buybacks, the state could use the money to upgrade the grid, trim trees near power lines, repair outdated infrastructure and prevent the next Camp Fire.

And once that’s done, years down the road, the extra money in the state coffers could be used for all kinds of things – including paying for distributed solar on roofs, energy efficiency, and other improvements to reduce carbon emissions.

Meanwhile, the top execs who earn millions while their greed kills people will be out of job — as they should be.

I keep hearing people say that government doesn’t run things well – but the long history of public power is an example to the contrary. Government does a great job of running electric utilities – a better job, clearly, than PG&E.

So why once again bail out a criminal enterprise that has destroyed an entire city – when there’s a much better alternative? What’s Governor Newsom going to say about that?