The Trump Administration is going forward with plans for massive deportation raids this weekend – but the message I am getting from immigration lawyers is: Don’t panic. Know your rights. 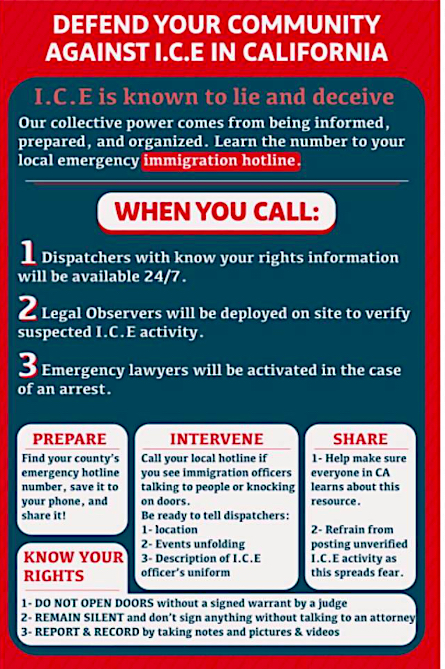 Trump wants to spread fear. The raids are a terror tactic. As my friend Brian Edwards-Tiekert, KPFA Up Front host, pointed out on Facebook:

Although the raids planned for this weekend nominally target ~2,000 immigrants with outstanding deportation orders, the NYT says ICE will be detaining for deportation other undocumented immigrants they encounter on those raids. (People who registered addresses with immigration courts will probably not be at those addresses when the raids start, so this could be the bulk of the deportations.) This has the effect of putting a much larger population on edge.

The terror is the point.

The US government doesn’t have the capacity to round up and deport a meaningful fraction of the ~10 million undocumented immigrants here — so these raids are meant to inflict fear, make life harder, get people to risk their jobs by no-showing at work, self-deport, etc. The panic they inspire impacts far more people than the raids themselves.

Breathless re-posting of rumors and hearsay helps spread the terror. If you’re just re-posting unverified reports of raids, you’re helping keep a community panicked, and dispersing efforts to effectively respond. IF YOU WITNESS SOMETHING, it is much more important to get that information to one of the rapid-response hotlines that have been set up by immigrants’ rights groups — they confirm facts, dispatch witnesses and legal support, alert the press, etc. 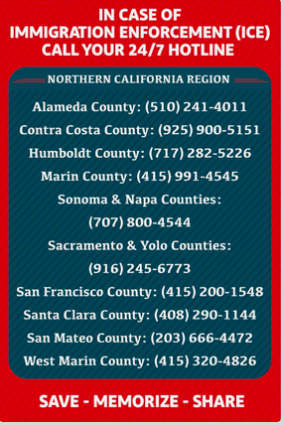 Cisco Ugarte, who runs the Immigration Unit at the SF Public Defender’s Office, told me that the people should “not report raids unless they are verified.” Please don’t spread rumors.

He urged the community not to be frightened by Trump: “We have one of the most vibrant legal services networks in the country,” Ugarte told me. “There will be lawyers available to you, and we know how to win these cases. You can beat a raid and you can win a deportation case.”