A new study from a group of forensic experts says that the late Public Defender Jeff Adachi could not have died from cocaine and alcohol use. It directly challenges the report put out by the city medical examiner and reported without question or challenge by the news media.

The study, by a group that includes a prominent cardiac pathologist and an expert in toxicology, concluded that Adachi died of natural causes – a sudden heart attack.

According to the study, the amounts of alcohol and cocaine metabolites present in his blood were so low that they were irrelevant to any consideration of the cause of death.

The blood alcohol level was 0.01 percent – so low, forensic toxicologist Nikolas Lemos notes, that it’s not even worth noting:

Ethanol at a concentration of 0.01% (w/v). This is a barely reportable concentration of ethanol which in most jurisdictions (including the City and County of San Francisco until recently) is considered too miniscule to report in death investigations. Kurt M. Dubowski, PhD, terms this concentration as “Subclinical” because, even if real, there are no apparent or obvious effects and the behavior of a living person with this BAC is nearly normal (Dubowski, 2006).

Miniscule ethanol concentrations such as the ones allegedly measured in Mr. Adachi’s postmortem specimens may, however, not even be real as there have been reports in the scientific literature for decades showing that these can be postmortem artefacts due to natural processes that take place after death. Any board-certified forensic toxicologist or board-certified forensic pathologist should be aware of this phenomenon commonly- occurring in medico-legal death investigations. This analytical finding is toxicologically insignificant.

As for the cocaine?

No toxicology-related inference may be safely drawn from the presence of the small concentration of this inactive metabolite in the peripheral blood of this decedent. The presence of benzoylecgonine in the Peripheral Blood of this decedent without the presence of any cocaine, cocaethylene or other cocaine-consumption-related compounds in this specimen could be the result of diffusion, contamination, or other unverifiable processes that would render this nothing more than a guessing exercise. This finding is toxicologically insignificant, and any board-certified forensic toxicologist or board-certified forensic pathologist should be aware of the insignificance of such an isolated finding in medico-legal death investigations.

In other words: Adachi wasn’t drunk and hadn’t used any significant amount of cocaine at any time in the immediate period before his death.

Dr. Dylan Miller, a cardiovascular pathologist, said the results of the autopsy show that Adachi almost certainly died of a sudden massive heart attack – brought on by high blood pressure and blocked arteries, not by any drug or alcohol use.

According to these experts, the city’s pathologist drew blood from near Adachi’s heart – and the state of the art for autopsies is not to use that type of blood. After death, the body itself can create small amounts of alcohol near the heart, they said; drawing blood from the arms or legs is more accurate. 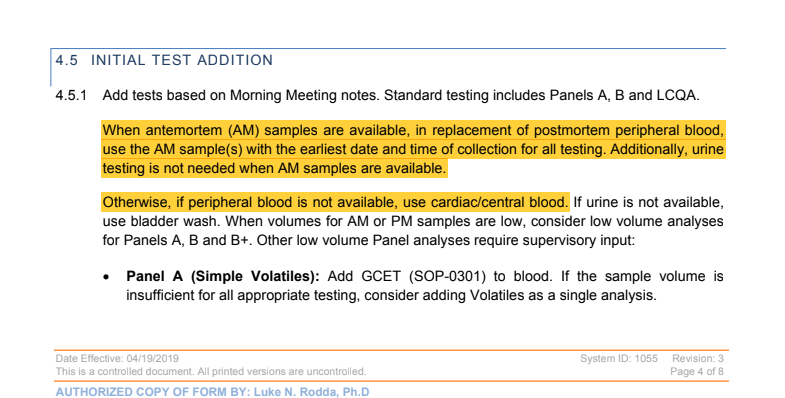 The traces of cocaine found in Adachi’s urine only indicated that he may have been exposed to the drug sometime in the past week or more. It’s also possible, Lemos noted, that the test for cocaine could be a false positive, especially given the very low concentration.

Lemos is out of the country and I couldn’t reach him. I asked Robert Chan, the attorney for Adachi’s family who arranged the private analysis, to explain the science to me in simple terms (the way he might do in a courtroom). He said:

It’s standard practice for a pathologist to examine the heart and identify any conditions that could be a serious medical condition.  Evidence of chronic cocaine use certainly falls within that category.  Dr. Miller, not being at the autopsy, can only rely on the detailed descriptions provided by the ME’s pathologist.  Given that they went out of the way to link Jeff’s death to cocaine, Dr. Miller is confident that any tell-tale signs of chronic cocaine use would have been documented and incorporated into the autopsy report somewhere.  Since they only referenced an “acute” exposure, and there is no mention of “chronic” use anywhere or any description of tell tale signs of such use, and not even a listing of it as a contributing factor, per standard protocol, it’s safe to assume it’s not there.

I’m not going to speculate as to why the professionals in the Medical Examiner’s Office may have gotten this wrong and put out a misleading statement suggesting that Adachi was drinking and on drugs when he died. But it’s curious:

Many SF cops disliked Adachi, and their union despised him. That’s because Adachi exposed misconduct at SFPD that led to felony charges and officers going to jail. Somehow, the cops leaked a report that made Adachi look bad, and the news media all went with it.

Adachi had a similar relationship with the Medical Examiner’s Office. According to a press statement from the Public Defender’s Office:

Some who are disturbed by the autopsy are pointing to a conflict of interest between Mr. Adachi and the OCME’s Director of Operations, Christopher Wirowek. In December 2018, just two months before Jeff Adachi died, he had submitted a formal complaint to the City Administrator accusing Mr. Wirowek of lying about the OCME’s accreditation and failing to correct those false statements. Adachi called for an investigation, in which he suggested if Mr. Wirowek was found to have lied, “He should be terminated.”

The Medical Examiner’s Office hasn’t responded to my emails, but they did put out a statement to the Chron:

“The Office of the Chief Medical Examiner routinely conducts autopsies to investigate deaths. Forensic pathologists sign off on the cause and manner of death, and their reports speak for themselves.”

Chan said, “Losing Jeff was a terrible tragedy, and his family has suffered so much. The family is heartened to know that nothing in Jeff’s autopsy revealed any indication of chronic drug use. It provides peace of mind that we did know Jeff better than the circumstances of his death have suggested.”