OPINION: How I brought back the Bay’s favorite dog mag

San Francisco is a dog town. You hear it said casually all the time—“there are more dogs than children”—but those numbers are actually true. So launching Bay Woof, a newspaper for dog lovers, seemed relatively easy the first time around.

This was 2007 and the work came straight from my heart, combining my practical skills with my favorite subject: canines. Like any new start-up, there were challenges, but together with colleague and editor Mindy Toomay, we made it through those early years, producing a fresh print edition of Bay Woof, along with its companion website, every month without fail.

Heartbreak hit in 2011 when Mindy’s beloved husband Tad Toomay (a.k.a. Bay Woof columnist “Herb Canine”) died, prompting Mindy’s retirement. While no one could replace her, both Deb Hirsch and Kate Lorch did great work at the editor’s desk over the next few years. But behind the scenes, Bay Woof had begun to struggle. After some trouble with the books, compounded when our largest advertiser moved its marketing dollars to other cities, we finally hit a wall. In April 2016, with the heaviest of hearts, I made the decision to sell Bay Woof to East Bay publisher Steve Buel and Judy Gallman of Telegraph Media.

If 2016 was a hard year for me, it would prove even harder for our country. While I found work as a designer for a global retail conglomerate, an orange Mussolini took up residence in the people’s house, tearing out the foundation and painting it Russian red. It was the beginning of innumerable horrors: families at the border being torn apart, National Parks sold for mineral rights, lobbyists moving into cabinet positions, a cat column debuting in Bay Woof. OK, maybe that last item wasn’t quite at the same level, but the world was looking pretty darned dark.

While I was glad to see Bay Woof still on the stands each month, it felt like giving up a beloved pet for adoption, trusting the new owners to feed, walk and love her, to keep her growing and thriving. Sadly, the decline of print media had already begun by then and publications everywhere were starting to fail. My favorite alt papers were no exception, Bay Woof included.

By early 2020—while the inept were dictating our country’s state-by-state response to a global pandemic—Telegraph Media decided to close its doors. That’s when I got the call asking if I wanted Bay Woof back. Even though I had no idea how I’d make it work, I said yes.

For a short time, I pondered not doing anything, just holding it close like a long lost pup. The last print edition had been in March, but by early spring, as the world shut down, I put out some surveys to see if anyone cared whether Bay Woof lived or died. The hundreds of positive responses I got were like a sudden ray of sunshine. Maybe love of the dog could save the world. Or at least make it feel better.

For obvious reasons, dogs themselves had done fairly well in the pandemic (the humans are home!). But so many dog-related businesses were hurting—brick and mortar stores closing, contractors without work, dog walkers on permanent vacation since owners could now do the walking themselves. Meanwhile, vets and caregivers were scrambling to rebuild their business models, dog trainers were becoming Zoom experts, and new dog adoptions were at an all-time high. As the economy continued to shift, there were now even more dogs than children in San Francisco. And that meant more humans who needed news and information about how to live with their furry companions.

As the chaos in our country spun out of control, I had to do something besides let anxiety blow my circuits. What better project than to resurrect Bay Woof? With the help of my old Austin Chronicle family, I started a nonprofit organization, the Bay Woof Foundation, to open up more funding and tax-deduction possibilities (future Foundation plans include programming to serve at-risk youth and dogs, as well as other community service projects). We built a bare-bones business plan incorporating low cost advertising to better share the platform with more dog-related businesses. During this time, I also reconnected with former contributors, letting them in on my plans for a re-launch.

After months laboring over a hot keyboard—fixing and clicking far into too many late nights—the reborn Bay Woof was finally ready to meet the world. And so, on the early morning of September 4th, I took a deep breath and went live with Bay Woof’s brand new e-magazine and website. The response was immediate, wonderful, heartening:  Bay Woof was back and our readers loved it. Then I slept for 14 hours.

Today, it seems the whole world is on fire. Cries for social justice ring in the streets and our own California is literally burning up. We’ve face-covered and sheltered for more than six months with no clear end in sight. But we can always depend on the love of a dog.

Learning to see the world through their eyes exercises our hearts and imaginations: to live with only love as a goal, grateful for what appears in our bowl, putting one paw in front of the other until it’s time to rest.

Dogs may not be able to read, but our world will be better if we follow their lead. Let’s keep the pack together and continue to feed our hearts and souls to strengthen us for the fights ahead.  We can do it together as long as we have love and dogs in our hearts.

M Rocket is the publisher of Bay Woof. 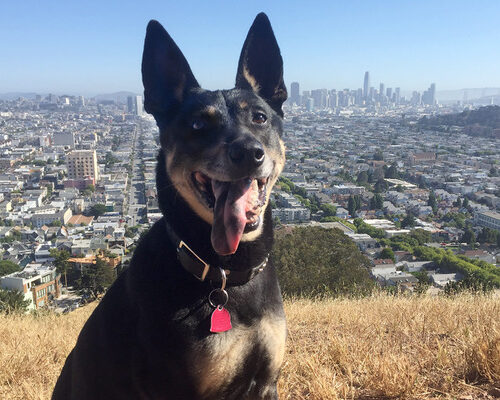 M Rocket
M Rocket is the publisher of Bay Woof