In mailer, local party head says incumbent “agrees with us on 67 percent of races” and that Peskin votes against the GOP 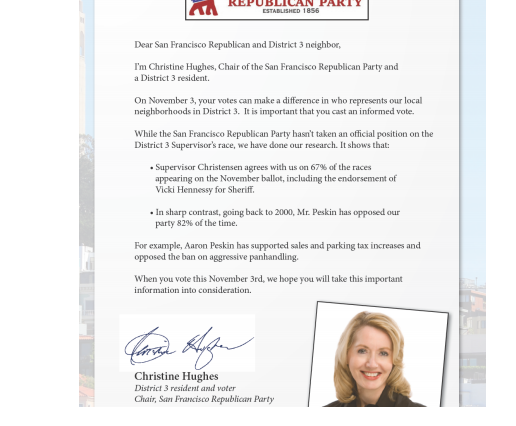 NOVEMBER 2, 2015 – A new mailer going out to District Three residents carries a message from the chair of the Republican Party: Sup. Julie Christensen is good on GOP issues.

Christensen, who has been touting her endorsement by the Sf Democratic Party, also apparently appeals to Republicans. The letter from GOP Chair Christen Hughes notes:

“While the Republican Party hasn’t taken an official position on the District Three supervisors race, we have done our research,” a letter from the chair of the GOP states. “Supervisor Christensen agrees with us on 67 percent of the races appearing on the November ballot … In sharp contrast, Mr. Peskin has opposed our party 82 percent of the time.”

A Democrat, opposing Republican policies? Imagine that. (Peskin also served as chair of the Democratic County Central Committee, back in the days before the local party was taken over by real-estate interests.)

What’s more remarkable is that the official candidate of the Democratic Party so often agrees with Republicans on the key local issues (short-term rentals and housing in the Mission, for example) that the chair of the local GOP feels it important to send out a personal appeal for her election.

Christensen hasn’t been responding to my calls and texts, but I got Peskin on the phone. “I think that message speaks for itself,” he said.

It’s also something of a remarkable statement about the state of the San Francisco Democratic Party that on the key issues, the Democrats and Republicans seem to be on the same page.

That’s what happens when the chief lobbyist for the Board of Realtors becomes chair of the local party.