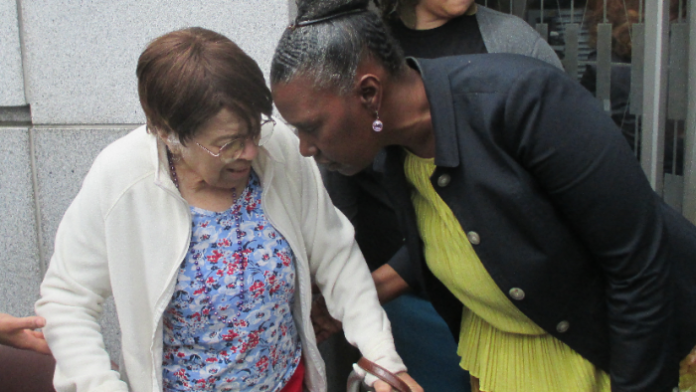 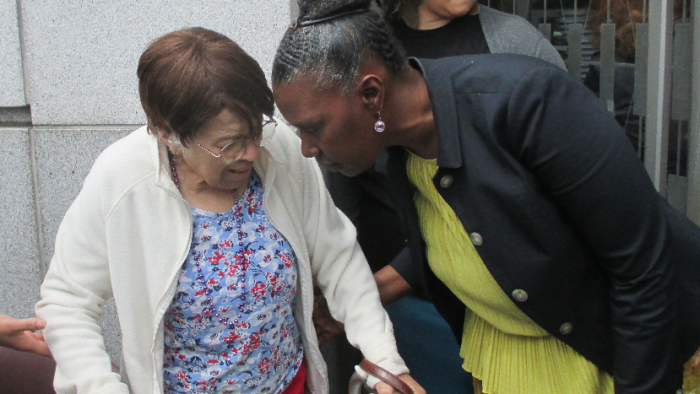 It might sound bizarre but it's true: a 100-year-old Iris Canada may be evicted from her home at 670 Page today.

It might sound bizarre but it’s true: a 100-year-old Iris Canada may be evicted from her home at 670 Page today, after a court order issued in August. Canada was hospitalized last night due to stress, family says she fell ill after receiving the eviction notice.

In April, a judge ordered that Canada could stay in her home if she paid her opponent’s legal fees; $160,000. Canada has lived in her Page street home for more then 40 years was given two options: pay the legal fee or sign documents for condo conversion.

In 2002, Carolyn Radisch and Stephen Owens  bought the six-unit building, renovated five units and sold them as tenancies in common (TICs).

According to court papers, in 2005 the owners –Peter Owens, Carolyn Radisch, and Steven Owens, a married couple and a pair of brothers– sought to evict Canada under the Ellis Act, but she fought back. As part of a settlement in that case, her then attorney, Steven Collier, said in a declaration, that the owners agreed to allow Canada to purchase a lifetime lease for $250,000, payable at $700 a month. Terms also stated that she couldn’t have anyone live with her, including caregivers, or even live elsewhere for extended periods of time. She was 89 at that time.

The arrangement fell apart when Canada declined to get on board with plans to convert the building into condos. Since then Canada has been fighting to stay in her home. Canada lives on social welfare and can not afford to pay the amount requested by her opponent.

In August, Owens attorney Mark Chernev went to court seeking an eviction because Canada was unable to pay the legal fee as ordered by the court.

Canada’s niece, Iris Merriouns, who has been handling the case and legal proceedings says she was shocked to hear about the eviction notice “We assumed that we were in some type of settlement negotiations with the Owens family, Peter Owens, and to our surprise we received a notice from one of the government agencies that she had exactly 48-hours(..) my aunt called Peter Owen he didn’t take the call. She absolutely begged him to stop. After the call she became very very ill, she started screaming and shaking and crying and vomiting”

Owens attorney Mark Chernev has disputed claims made by Merriouns in the past ” What you see here is the exploitation of Ms. Canada by her family. My client Mr. Owens has been more then helpful to Ms. Canada. From making sure her food from meals on wheels is delivered to her to ensuring that she’s comfortable. We’ve done everything we can,”

In a heated argument between Chernev and Canada’s attorney Dennis Zaragoza in the corridors of the courtroom in August, Chernev accused Merriouns of exploiting Canada: “My client has told you he’s ready to give you anything in writing, anything you want you can have it all he wants is for your client to sign the conversion papers. Instead her niece (Merriouns) wants to buy the condo at a discount price. Tell me how a 100-year old woman on social welfare is going to buy the apartment?,”  he said, Chernev told 48hills that his client is willing to let Canada stay for the rest of her life is she signs the condo conversion papers.

Canada’s attorney Zargoza doesn’t believe the offers are sincere: “Signing off the conversion papers means she would lose her right to stay, what is to stop them from using another excuse to try and evict her afterwards,” he said.

Responding to Poor Magazine’s Lisa Tiny Gray Garcia Zargoza spoke about why Canada would like to own her apartment: “The fact is that I have been willing to pin them (the Owens) on certain issues as to whether or not they would be willing to actually give Iris Canada certain things as a result of the settlement. The reason why she would like to own her unit is because of actions like this, she has been harassed for years and one time I understand she had a stroke as a result of the harassment that she was getting from other tenants (..) when you have such a situation when you can’t live in your unit, because first you are just a tenant and everyone else is an owner something is wrong. Something needs to be done so she can live out her years in peace, so she can have a care taker, so she would know essentially that everything will be okay,” Zargosa said after a court hearing in August.

In the past, building owners Carolyn Radisch and Stephen Owens have claimed that Canada violated the terms of her life estate and has actually moved out of the building since 2012. This makes her life time leese in valid. Canada insists that her absences are due to hospital stays and visits to relatives

According to the deadline on the eviction notice, Canada is to be evicted today while she’s in the hospital. At the time of writing this story the Sheriff’s department hadn’t responded to our query on whether the eviction would be put on hold given the recent development.

UPDATE: Canada’s attorney was able to get a stay on her eviction for a week

This is a developing story and we will be updating it.

Previous articleChildcare celebration or campaign event?
Next articleFor the love of Claude