“This is the Black Panthers vision, and its being evicted,” said Aunti Frances Moore, revolutionary founder of the Self-Help Hunger Program and poverty skola/teacher with POOR Magazine. She was speaking on the impending eviction from her North Oakland home — and the base of her deep rooted revolutionary community work with the Self-Help Hunger Program at Driver plaza, a small pocket park at 61st and Adeline, a block away from her apartment. 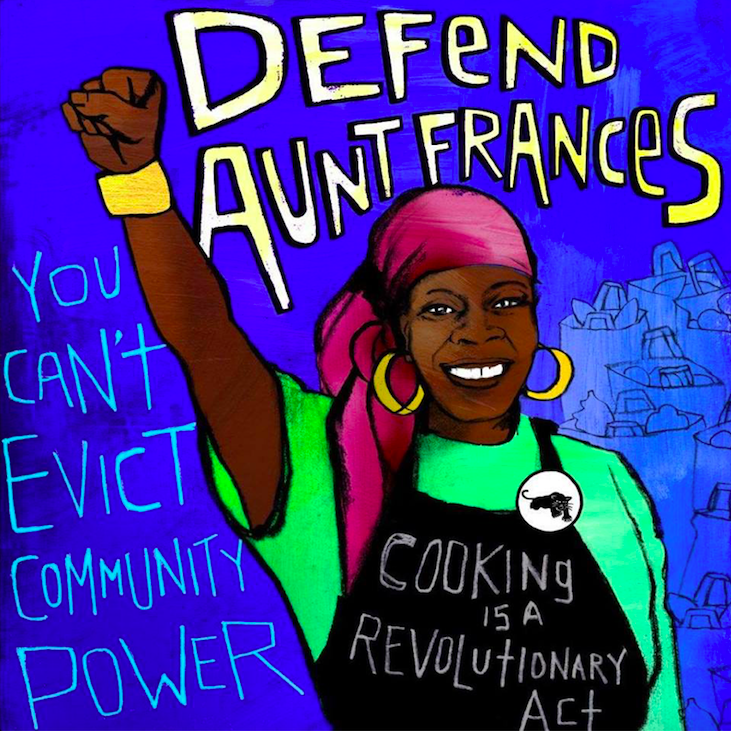 The devastation of eviction is something that destroys the spirit of anyone it touches, but for elders and children, as documented and presented to SF District Attorney George Gascon by POOR Magazine in 2014, it’s elder and child abuse. In the case of Frances Moore, this is abuse of an elder, of community love, power and liberation.

The triplex that houses former Black Panther Aunti Frances was sold to Natalia Morphy and her parents James and Alexandra Morphy in 2016. Oakland’s rent control laws limit how much landlords can raise the rent on existing tenants, and that applies even when the building is sold.

Median rents have skyrocketed in this gentrifying city, and can only be raised to market rates when tenants move out. So even though Aunti Frances has been an excellent tenant paying her rent on time, the Morphys want her out. Aunti Frances was served eviction papers on November 19th.

This is the Morphys’ third attempt to push her out. Rent control should make this impossible, but there are gaps in the legislation. If the eviction is successful, it is unlikely that Aunti Frances will be able to find other housing. She’ll either be forced out of the city, or into the streets.

“I am just tired Tiny, so tired of fighting for everything and then fighting just to live.” Frances and I speak all the time because she is integral part of our Elephant Council at POOR Magazine, our teaching staff at our liberation school, Deecolonize Academy, and our revolutionary building project us poor people have created called Homefulness — a poor people’s solution to homelessness. Frances is co-leader of the Stolen Land/Hoarded Resources Tours across Turtle Island, a theatre of the POOR teacher, radio producer and published author of the POOR Press publication called “The Making of Aunti.”

“We need to build Homefulness in North Oakland too,” she said at a recent POOR Magazine DegentriFUKation Tour held at Homefulness, East Oakland. Aunti Frances and the Self-Help Hunger program embodies everything we land liberators and community revolutionaries claim to be and do and she is a very important leader in the Oakland community who carries all of her spirit, her poverty scholarship, and her love into all she touches. But this eviction has truly dealt her another blow, pulling her into the depression, fear and loss that plagues all of us houseless and formerly houseless folks.

“Thank god for Aunti Frances and this community, otherwise I wouldn’t eat,” said Sam B, Black elder, life-long Oakland resident and POOR Magazine reporter who became houseless when his family home was stolen with the fake paper trail of an unpaid tax bill, only to be predated on by one of the many salivating gentrifiers that predate on all of us poor people every day.

The work and struggle of the long-time Black residents of North Oakland who are participants of the Self-Help Hunger program that feeds, clothes, supports, and offers love at Driver Plaza every week, and this eviction threat of Aunti Frances, is in so many ways a metaphor of the hypocrisy of the supposedly Black Panther-admiring Oakland. The Black community that built the spirit of Oakland, those who walked liberation and Afro-centric deep structure, are the very people who have lost their homes, economies, and lives to the lie of settler colonizers.

Elders and leaders like Sam B and Aunit Frances shouldn’t even be fighting to stay here. Matter of fact, the Oakland gentrifiers and the City of Oakland should be paying reparations to the people who made Oakland, Oakland.