Oakland's self-proclaimed 'Phil Donahue of the Internet Age' works the room like a hilarious punk-rock savant. 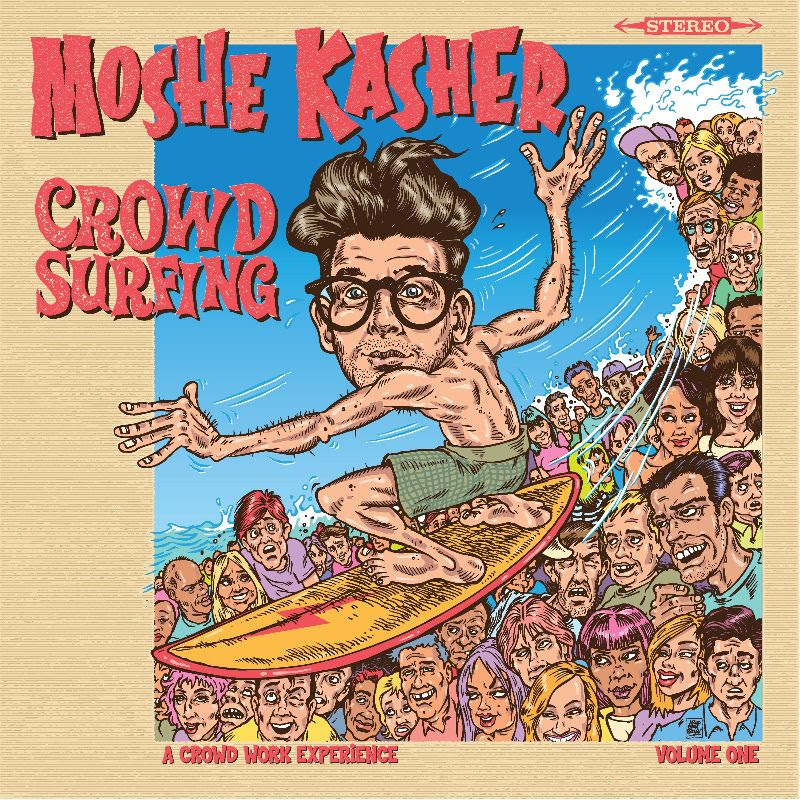 Packing 10 tales of embarrassing scenarios involving everyday people caught in tawdry situations, Crowd Surfing, the new comedy album from Oakland native Moshe Kasher sees the self-proclaimed “Phil Donahue of the Internet Age”—some of you may need to google that reference—extract mortifying tales from an eager crowd in Washington DC. (Kasher performs Fri/24 at Sketchfest, the day the album is released.)

His verbose, digital comedic speed in this fully crowd-driven project propels the record to operate like a semi-concept album. Kasher tosses out the antiquated “Who are you and what do you do for a living” line of tomfoolery. Shit immediately gets weird.

Kasher is multitasking, like a Boss. Working blue, picking out freaks, keeping the crowd engaged and the stories bizarre. His penchant for coming across relatable, a hat-tip to idols—Patrice OʻNeal, Paula Poundstone and Don Rickles—nets the risqué boudoir experiences. It’s a major flex.

Forever upholding the multi-hyphenate moniker, Kasher is an acclaimed author, host of several podcasts and stoker of alt-right ire with his now-defunct Comedy Central series “Problematic with Moshe Kasher.” Heʻs written and produced for the television shows Another Period, Wet Hot American Summer, Little America, and the upcoming Betty on HBO, and appeared as an actor on Portlandia, The League, and Brooklyn Nine-Nine.

But this project right here reverses the idea that crowd-work should be regarded as a sub-par skill, or a move executed to kill time during a set. Rather it should be an essential tool in every stand-upʻs repertoire.

Kasher learned from artists who raised this interplay to transcendent solo standards. Sometimes it’s the only thing that can right the ship if all other aspects of the set keep hitting the toilet. New bits need constant work to hit right and stand-by bits often hit their expiration dates quicker than expected.

You don’t want to get caught out there.

When its cooking, similar to a baseball game, everything important is happening inside this portal. Exterior measurements of time donʻt count. Kasher, who grew up in North Oakland’s Temescal and Piedmont Avenue neighborhoods and started his stand-up career at the Luggage Store in San Francisco, walks side by side with his audience for the entire hour here. Showing his vulnerability, in the most comedic way, along with the storytellers.

Akin to seeing Black Thought of The Roots do a 10-minute freestyle, crowd-work can be jazz too.
Kasher, however, delivers us erupting punk-rock. The material is perfection, just sometimes, Moshe, who is a funny professional podcaster and comedian, needs to shut the eff up and let the people tell the story before he goes in for the satiric dissection.

Chicken before the egg, Dawg.