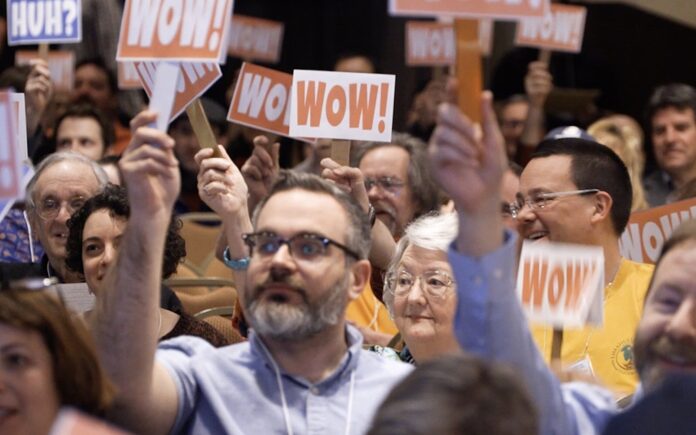 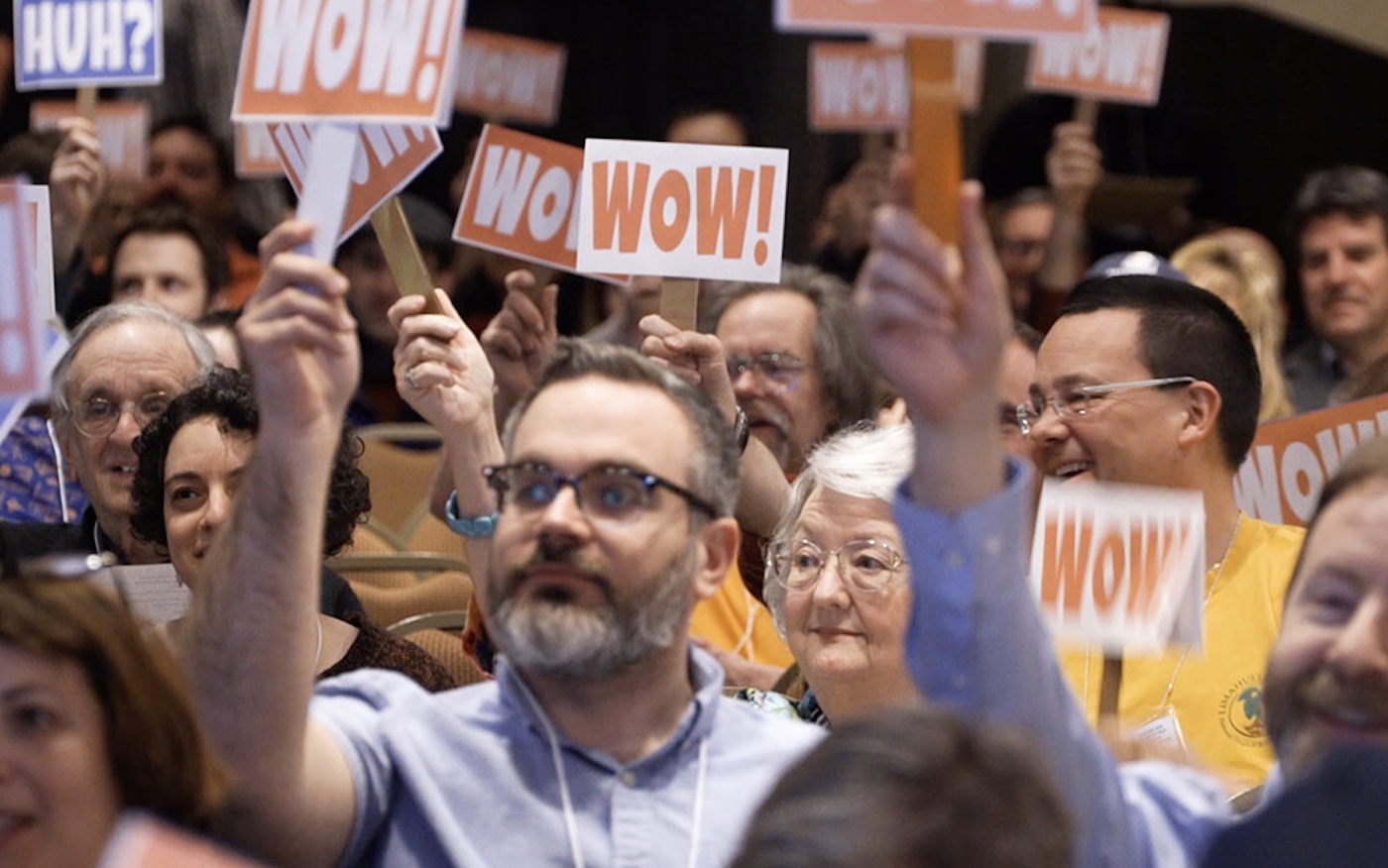 A man, a plan, a documentary: ‘The Palindromists’

Featured at DocFest, Vince Clemente's film follows competitors at the World Palindrome Championships. So many dynamos!

Palindromes read the same forward and back. We learn that in grade school. “Madam, I’m Adam.” “A man. A plan. A canal. Panama.” “Was it a cat I saw?”

San Francisco artist and writer Jon Agee has even written books dedicated to them: “Palindromania!,” “Go Hang a Salami! I’m a Lasagna Hog!,” “Sit on a Potato, Otis!” and “So Many Dynamos!”

Agee is among those for whom wordplay remains a lifetime passion. He is also one of the subjects of The Palindromists, streaming Sept. 3-20 as part of SF DocFest. (See our lively Docfest preview here.) Vince Clemente’s documentary examines the world of those for whom composing lines that are identical in either direction is as natural as breathing.

Clemente is a documentary filmmaker who also runs the Tetris World Championship that pits video gamers against one another. He was in Portland for the event in 2012 when he happened to overhear someone ask somebody if he was the world palindrome champ. The man was standup comic Mark Saltveit, and yes, he was the world palindrome champ—the first one ever for the competition started in 2012 by New York Times’ crossword editor Will Shortz.

“I turned around and asked Mark, ‘What’s this world championship thing?'” Clemente remembers. “Like everyone else, I didn’t know you could write your own palindromes or that there was a championship for it.”

That encounter led to a 2015 short, “A Man, A Plan, A Palindrome,” focused on Saltveit. But Clemente wasn’t done. Saltveit’s wealth of knowledge about palindromes, his stories of the competition and his fellow wordsmiths only whet the filmmaker’s appetite for more. With Saltveit set to defend his title at the 2017 championship in Stamford, CT, Clemente was all in for a feature.

Saltveit, Agee, Utah State Orchestra bassoonist Lori Wike, and Australian Martin Clear are among those profiled in The Palindromists, all of them competitors at the championships. Shortz also appears, as do Weird Al Yankovic, who does not write palindromes himself but does sing a song full of them called “Palindrome,” and actor and writer Danica McKellar, who shares the palindromes she writes with fans on social media.

“The whole thing was an elaborate scheme for me to hang out with Weird Al,” Clemente jokes. “He’s definitely one of my heroes.

“Danica McKellar was probably one of my first crushes growing up as a kid. And she’s just way into palindromes. It’s kind of bizarre how it all tied into one story.”

On one level, The Palindromists spins a history of the form, dating back to its earliest times and emphasizing that this wordplay isn’t just play. During World War II, palindromists were among the codebreakers at Britain Bletchley Park.

To that history, Shortz, Yankovic, and McKellar add their observations. The bulk of the film is devoted to the competitors. The film culminates with them altogether at the 2017 Championships, but Clemente spends time with each, getting to know them one on one as palindromists and as people. Saltveit performs standup. Agee works on his latest book.

Wike performs with the orchestra, handmakes reeds, and teaches a student. In one arresting scene, she leads the camera crew to Robert Smithson’s “Spiral Jetty” sculpture in the red waters of the Great Salt Lake. There, she sets up her bassoon in the middle of the spiral and plays.

“The Spiral Jetty, that was a beautiful thing I’d never heard of,” says Clemente. “That’s one of those moments you would never expect to happen in your life, but there you are.”

Perhaps the greatest challenge facing the filmmaker was to inject tension and suspense into the championship. There are two rounds. In each, the contestants are given parameters to choose from. For instance: The palindrome must start with a French or Spanish word, contain a word with the letter “q” not followed by a “u,” is in the form of a haiku. With those in mind, the competitors go off to write new palindromes within a certain timeframe.

The palindromes are then read to an audience that responds with signs saying “Wow” or “Huh” before voting for the best.

“They’re just in their head thinking about what they’re going to write. And there’s just a person sitting there writing. Not very exciting, right?” says Clemente, who nevertheless manages to wring suspense out of the contest.

“I think the drama lies within the time constraints. You have the ticking clock. You have people who are very articulate, answering, ‘What was your struggle there? How did that go for you?’ It all relied heavily on their responses. It was very reliant on having a great cast.”

Also, a friendly cast. One of the things that struck Clemente was the nature of the competition and the competitors. There is no trash-talking in competitive palindroming.

“It’s really nice to have a community where people are supportive of one another,” he says. “It’s a competition but there’s no anger or anything like that in this world. Everyone’s a nice person, who opens their doors up to you. They’re all funny, smart people.”

The Palindromists is available Sept 3-20 as part of Docfest. Watch it here.

‘Like a turducken’: Michelle Yeoh and Daniel Kwan on mind-bender ‘Everything Everywhere All at Once’

The star and co-director of the wild, multi-dimensional movie talk about getting it from script to screen
Read more
Movies

The comedian-documentarian talks about getting people to talk about 'America's Dad' as sexual predator for new Showtime series.
Read more
Sponsored link