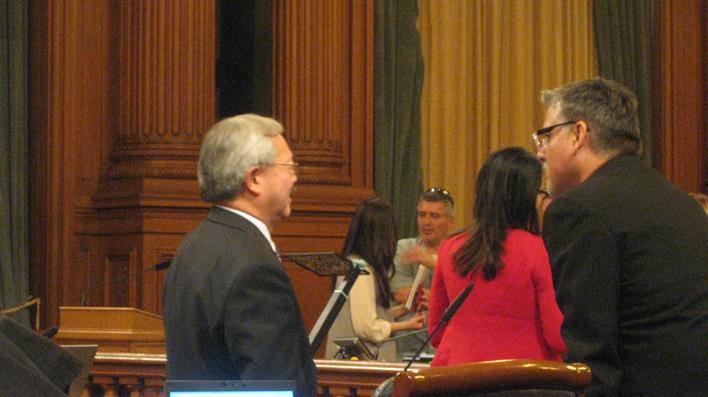 MARCH 11, 2014 — The city’s Climate Action Strategy Plan, which one might think would address ways to bring San Francisco to cleaner energy use, makes no reference at all to CleanPowerSF – a path to more sustainable energy.

That wasn’t always the case. The first version of the document had a chart showing how the public-power program would get residents and businesses off fossil fuels. Unfortunately, the text of that chart was hidden, so nobody could see it.

But through the wonders of the technology the mayor so loves, the obliviation left a trace.

At the Board of Supervisors meeting today, Sup. John Avalos asked the mayor why there was no mention of CleanPowerSF, which Lee and PG&E have been trying to undermine, in the climate report:

In your letter of introduction to the 2013 Climate Action Strategy,” Avalos noted,” you wrote that “the need for immediate action has never been more evident, and we know that cities are leading the way.” However the urgency of that statement is belied by the fact that the letter was dated October 21, 2013, and the Climate Action Strategy was not released until February 12, 2014.

“The version of the CAS released on February 12th included a “whited-out” table of projected participation rates in CleanPowerSF. But that table was unceremoniously removed in a new version that was posted two days later.

“Unless we quickly implement 100% renewable electricity, we will fail to meet our legislated Greenhouse Gas Emission reduction requirements in the next few years.

More after the jump
And yes, indeed, when Guardian reporter Joe Fitzgerald Rodriguez and I walked down to Avalos’ office, aide Jeremy Pollock showed how the clean energy program had been made to vanish.

In this first version of the report, you can see there’s a nice white space where text seems to be missing. 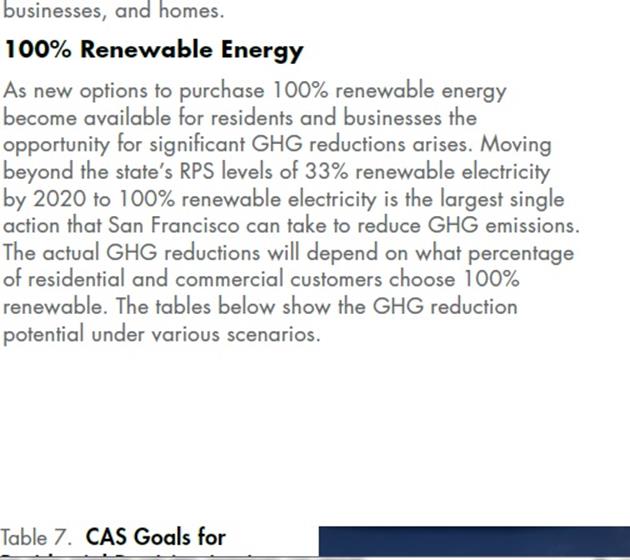 If you run your cursor over the space in the report and copy the invisible text, though, you find there was actually a chart there – one that suddenly was turned into white text. The chart looks like this:

So at one point, the authors of the climate change report wanted to show that CleanPowerSF could reduce the city’s reliance on fossil fuels. But the public wasn’t supposed to see that. In the second version of the report, now posted on the Department of the Environment website, all mention of CleanPowerSF is gone.

As for answering Avalos’ question, the mayor stuck entirely to PG&E’s script: CleanPowerSF, he said, is bad for the city, would lead to higher rates, and would cause the city to buy power from Shell, which the mayor doesn’t like.

We’ve talked about this many times: Shell is bad, PG&E is bad, and the whole idea of CleanPowerSF is to get the city into the power business, generating renewable energy. That’s what PG&E doesn’t like, and why the utility so opposes this project.

As Avalos said to me after the meeting, “The mayor did not address the main thrust of the climate strategy – the need to move to 100 percent renewable energy. Instead he held forth a number of smaller measures that won’t get us to our goals quickly.”

Mostly, the mayor talked about how generating clean power is not a priority for the San Francisco Public Utilities Commission right now. The system is overloaded with worrying about the drought and where to get enough water, he said. So public power, despite being approved overwhelmingly by the supervisors, has been pushed right off the agenda.

After Question Time, a bunch of reporters followed the mayor out and Rodriguez asked the key question: How did CleanPowerSF just vanish from the report? The mayor’s response: “I don’t think I have a real answer for that.”