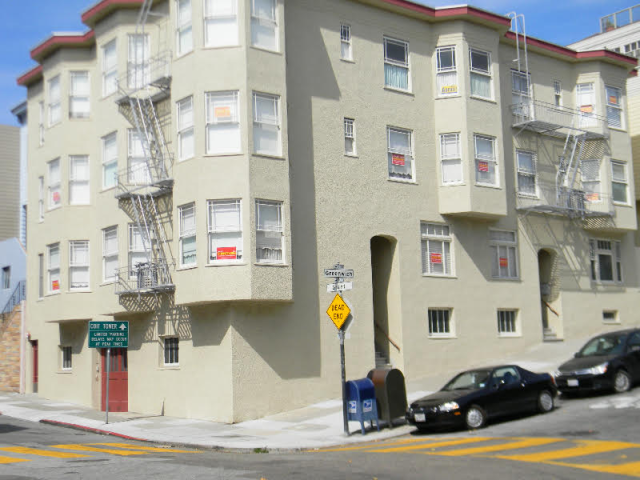 OCTOBER 20, 2015 — I can count at least ten Julie Christensen window signs in this house on Greenwich Street.

That’s interesting, because nine tenants were evicted from the place under the Ellis Act in 2013, according to the Anti-Eviction Mapping Project.

There’s only one Aaron Peskin sign, in the window of the sole tenant who is fighting the eviction.

It’s a study in contrasts: Peskin has the support of every legitimate tenant group in the city, and Christensen has, among other things, the CEO and chief lobbyist for the Board of Realtors.

She has tons of other real-estate money. You can get a great snapshot of who has donated to the two major D3 candidates at the city’s Ethics Commission website.

BTW, Ron Conway, who is a big investor in Airbnb, donated the maximum $500 to Christensen, as did four of his partners in SV Angel and his administrative assistant. I’m glad he’s paying her well enough to afford a $500 political donation.

Conway’s also given $50,000 to an independent expenditure committee that opposes Peksin.

A beautiful day, a festive parade—and a spirit of fighting back against a terrifying Supreme Court.
Protest

That's just one of the many key messages that the news media have missed.