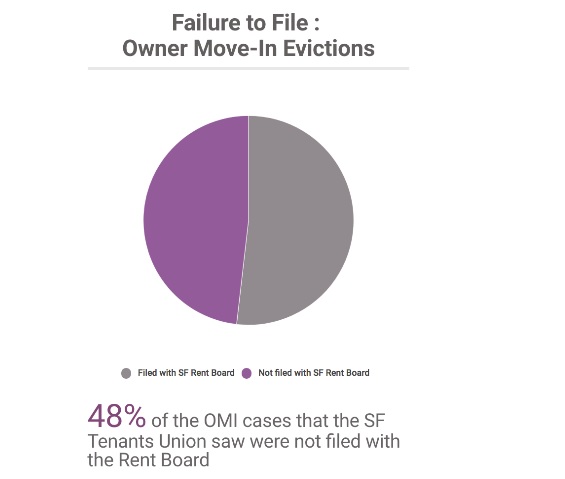 Nearly half the landlords who filed owner move-in evictions failed to file the proper paperwork with the city, a survey by the SF Tenants Union and the Anti-Eviction Mapping Project shows.

Of the tenant households who came to the Tenants Union with a notice of an impending OMI eviction, 48 percent of their landlords did not follow up with the Rent Board as required by law. In some cases the OMI may have been eventually dropped, but often tenants simply move out upon hearing the dreaded words “Owner Move-In” because there is little hope in fighting it.

The Mapping Project compared intake forms from the San Francisco Tenants Union to official filings at the Rent Board and found that many owners who claim they are moving fail to follow the legally required steps to do so. The data analyzed were 140 OMI eviction claims brought to the Tenants Union by tenants seeking counseling between 2016 and 2017.

OMI evictions are one of the most common ways that tenants are evicted from rent-controlled units in San Francisco. Landlords are legally allowed to evict tenants to move themselves or close relatives in (if the owner also lives in the building). But the landlord must make the property their primary residence for at least three years following the eviction, and file paperwork with the Rent Board. If the Landlord moves out during this period, the former tenant has the first right of refusal to re-rent the unit at the original rent and the rent is also restricted for subsequent new tenants. 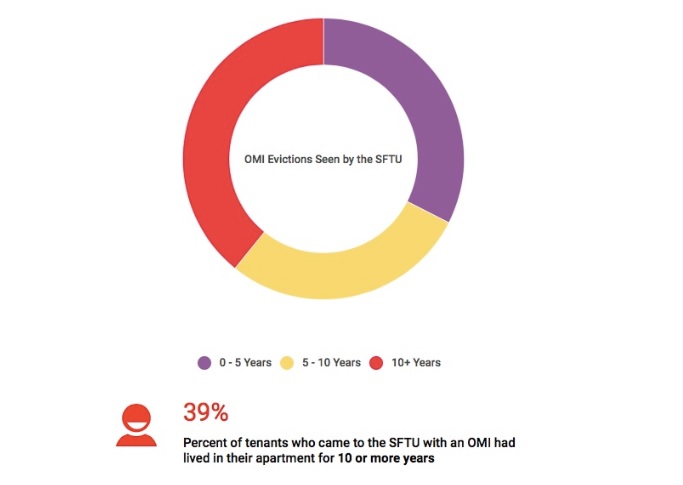 We here at the San Francisco Tenants Union know that these evictions are highly abused. Landlords seeking higher rents often use OMIs because it is very hard for existing tenants to defend against the claim, even if they suspect the landlord will never move in. While unscrupulous landlords pocket the benefit, new tenants are paying higher, illegal rents; this hurts us all in a city where residents and workers are desperate to find affordable rents.

The OMI research project found that landlords often do not follow the legal procedures regarding OMI evictions, making tracking and enforcement by the city very difficult. Legally, when a landlord fails to use the dwelling unit for the purpose they are stating in an eviction threat, it is presumed that the threat was in bad faith and they could face a Wrongful Eviction lawsuit.

Evictions can have a devastating effect on tenants. Another 2014 Mapping Project survey project found that 69 percent of respondents who have ever faced eviction in San Francisco earned less than $50,000 per year. From the OMI research we learned that 39 percent of tenants facing OMIs had lived in their homes for more than ten years, and 68 percent of tenants for more than five years before receiving notification of an OMI. This data as well as an interactive map can be found here.

There are two proposals to address the problem, but the Tenants Union believes only the legislation sponsored by Aaron Peskin, Jane Kim, and Hillary Ronen contains a complete set of enforcement tools designed to stop OMI fraud. This version was shaped by input by the Tenants Union along and other tenant groups after consulting the expertise of tenant lawyers and counsellors who know the real world realities of defending against these evictions in the courts.

On a broader note, the San Francisco General Plan includes the stated goal that it is city policy to preserve our rent-controlled rental stock. For decades, the San Francisco Tenants Union has fought against the cannibalization of rental stock for tenancy-In-common and condos, which pits owners and renters against each other for the same units. Poorer San Franciscans contribute to our social fabric and should have the right to feel secure in their homes. While the Peskin/Kim OMI fraud legislation is a start, it still does not address the fundamental problem with Owner Move-In evictions: It is not right to take someone else’s home just because you can legally do so.

Jennifer Fieber is staff at the San Francisco Tenants Union and Terra Graziani is a researcher with the Anti-Eviction Mapping Project.