One of the most important pieces of legislation to come before the supes this year will be heard in the Land Use Committee Monday/26 and should go to the full board the next day.

Actually, there are two competing bills to limit owner move-in evictions, and one is far more tenant-friendly.

That measure, by Sups. Jane Kim, Aaron Peskin, and Hillary Ronen, has a long list of new rules for the often-abused OMI, including a provision that would allow tenant groups to sue landlords who improperly evict tenants.

Right now, only evicted tenants (who are often long gone by the time the landlord re-rents the place at a higher rent) and the City Attorney’s Office (which has thousands of cases to deal with) have that right.

A competing bill, by Sup. Mark Farrell, doesn’t include the private right of action. His bill is backed by the Apartment Association; every tenant group in town supports the Kim-Peskin-Ronen version. 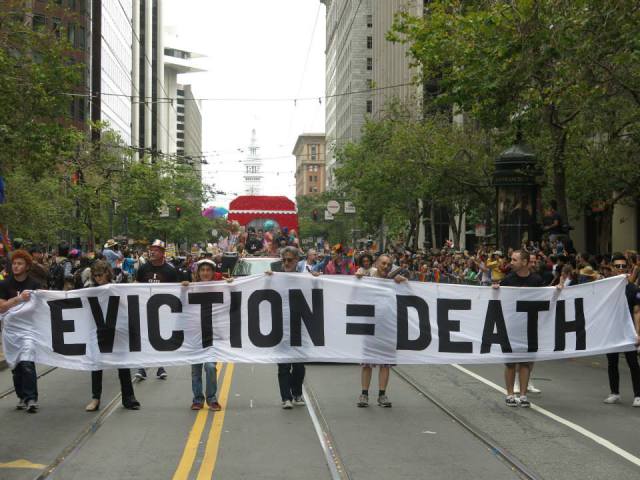 On Monday, both versions come before the committee – and tenant groups will be there in force. Farrell’s co-sponsors include Sups. London Breed, Malia Cohen, and Jeff Sheehy, and it’s likely that Katy Tang (who is typically conservative on tenant issues) and Ahsha Safai (who is close to the real-estate industry) will be on the side of the less restrictive bill.

But I am hearing from tenant activists that Sheehy (who is facing a challenge in June) might be willing to support the private right of action. That would be a major victory for tenants – allowing groups like the Tenants Union, the Housing Rights Committee or the Tenderloin Housing Clinic, which are on the front lines and know when these bogus evictions are happening, to enforce the law would make it much harder for landlords to cheat.

And cheating is what this is about: Evidence from the Tenants Union shows that nearly half the landlords who do OMIs don’t file the proper paperwork with the Rent Board. Almost 70 percent of the tenants facing these evictions have lived in their apartments for more than five years, and 39 percent for more than ten years.

The Kim-Peskin-Ronen bill contains another critical provision that the pro-landlord forces seem less willing to compromise on. That measure would render void any agreements by tenants to move out and not sue if the landlord fails to file the eviction with the Rent Board.

Sleazy landlords love to tell tenants that they are going to be evicted anyway, so it’s best for them to sign away their rights in exchange for a buy-out payment. But if the tenants, desperate to get some cash for another place to live, sign those deals, they can’t sue later.

Blocking unscrupulous landlords from buying out tenants then violating the law and re-renting the place at a higher rate ought to be a key element of any attempt to limit illegal OMIs, tenant advocates say.